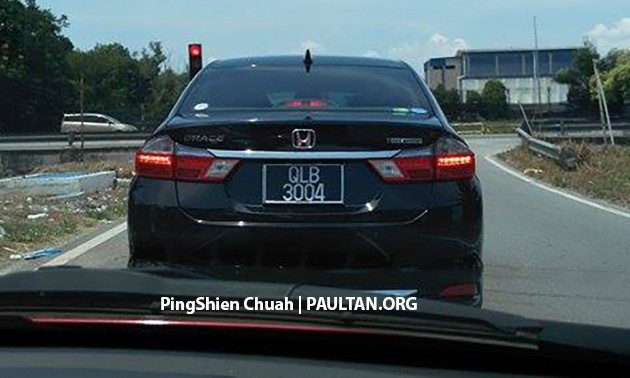 Hybrid cars are the new hot topic in the automotive world. Indian customers being a bit shy toward the greener cars are opening up toward the new innovations. Honda City is one of the most popular and best sold sedans in the country. Recently a Honda City hybrid was spotted testing on roads in Malaysia. In Malaysia City is known as Grace. Therefore we guess a Honda City hybrid is on the card in India as well.

Although Honda Malaysia hasn’t confirmed a launch of the City hybrid in the country, but as it was spotted testing, the hybrid sedan might hit the market in near future. Recently in the last union budget Indian government has reduced the excise duties on the hybrid and electric cars to promote environment friendly cars. Therefore Honda City might be a good option for the brand in India. The car doesn’t boast any difference cosmetically, but the powertrain is different. It gets power from a 1.5 litre i-VTEC petrol engine, which is paired with an electric motor. The transmission duty is done by a seven speed dual clutch transmission. The 1.5 litre internal combustion engine churns out 110 PS peak power and 134 Nm of peak torque, while the electric motor generates around 29.5 PS peak power and 160 Nm of peak torque. In India Honda might offer a CVT gearbox instead of a DCT unit, if they launch it in the country. If it does, then the hybrid variant will surely make an impact on the sales of the diesel variant. Although, it is very unlikely that the Japanese automaker will launch the City hybrid in India in near future, as the buyers at large of this country is not so keen about hybrid cars. Moreover, Honda already has several products lined up for the Indian market. Honda recently hiked the price of the City sedan by Rs. 24600 to Rs. 38100 depending on the variants.