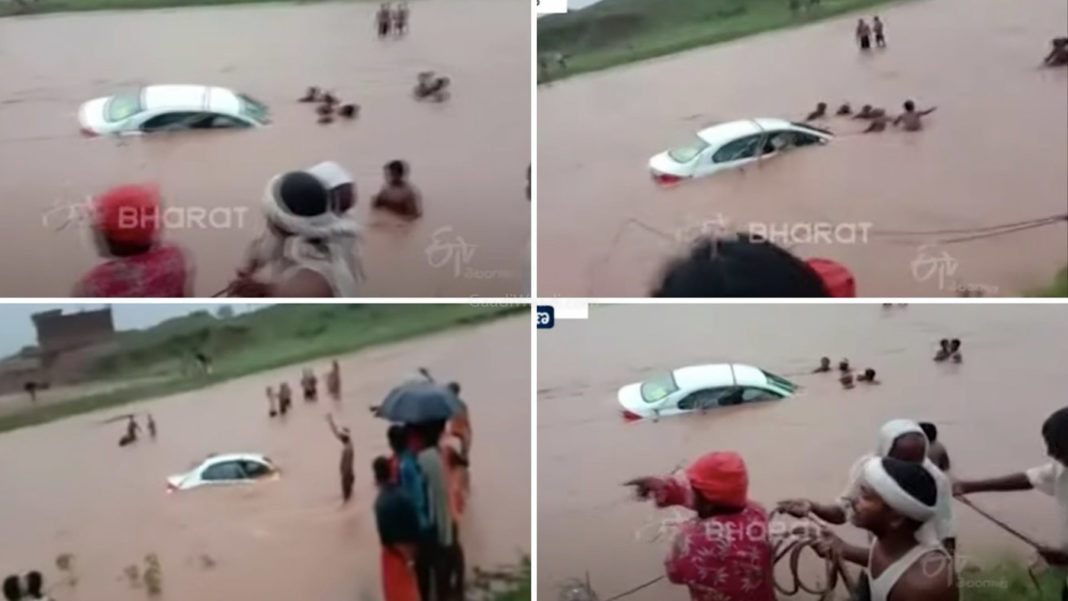 A Honda City carrying a newlywed couple and three other family members fell into a river in Jharkhand’s Palamu district on Sunday evening. A video has been doing the rounds of the internet showing locals from a village nearby jump into the river to save the occupants of the half-sunk car from drowning.

When the locals spotted the car afloat, about 8 – 10 locals jumped into the river when they noticed the half-sunk car floating. The occupants were returning to the groom’s village when the car fell off a bridge and got swept away in the Malay river. The sedan had already travelled about half a kilometer in the river before the villagers reached to rescue it.

The locals who went to rescue the occupants of the car had to smash the car’s windows to take them out safely. The villagers tied the car with ropes in order to pull the car back to the shores. The event took place near the Khamdih village in Jharkhand. The incident took place amid the heavy rainfall and thunderstorms in Ranchi, Jharkhand on Sunday.

We also reported about another incident involving a Tata Nexon that happened in Kerala because of bad weather conditions recently. The driver of the car in question lost control of the Nexon, which went and hit something and topped on its roof. The crash was so bad that the engine of the car flew out of the engine bay and fell far away from the Nexon.

The Tata Nexon ended up completely totalled, but the driver miraculously escaped, and walked away with just a broken shoulder in an accident that could turn out to be much more ugly. With that being said, we advise our readers to follow all traffic rules and be aware of your surroundings while you’re driving on the road, considering the fact that being careless not only risks your life, but also puts other lives in danger.