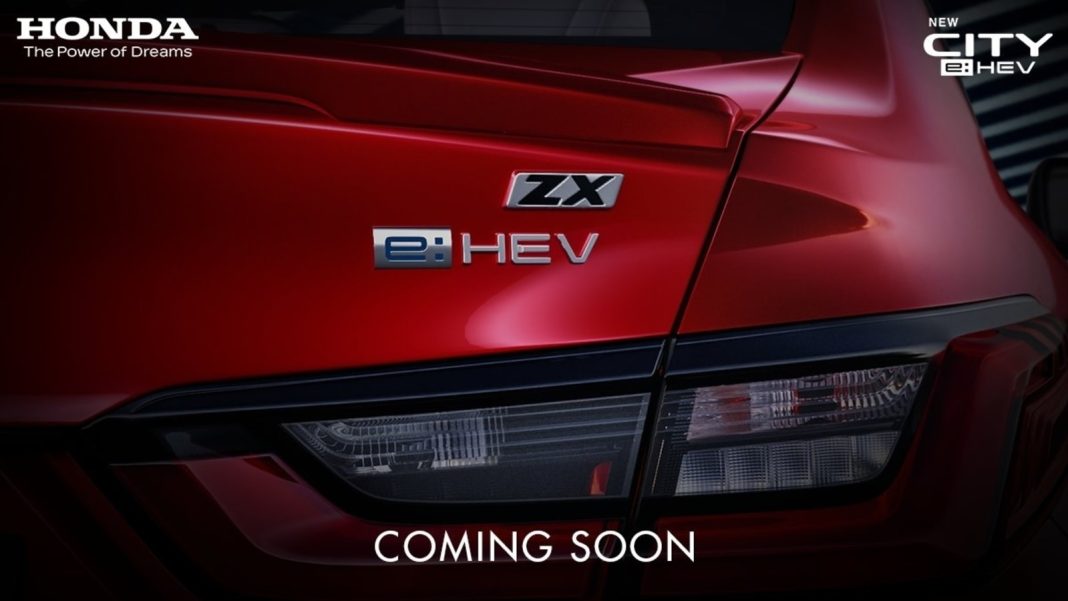 Honda City Hybrid will be launched in India on April 14, 2022, and it is expected to have a claimed mileage of more than 26 kmpl

Honda Cars India will officially unveil the hybrid version of the City sedan on April 14. It will be based on the top-spec ‘ZX’ trim of the sedan, as revealed by the teasers. The Honda City e:HEV will be the first of its kind in the segment, as its rivals in the Indian market do not get strong hybrid tech.

The 2022 Honda City Hybrid is already on sale in the international markets and it comes equipped with dual electric motors working in concert with a 1.5-litre four-cylinder Atkinson cycle naturally-aspirated petrol engine. While one of the motors acts as a propulsion motor, the other works as an electric generator as the system is tuned in such a way to keep the engine operating at its peak efficiency of around 2,000 rpm.

This is to lessen the fuel consumption when the working conditions are at higher rpm levels. For higher efficiency, the Japanese manufacturer does not use a transmission with the City e: HEV as a single direct gear is incorporated for high-speed driving. The two e-motors are attached to the engine as the combo generates electricity and stores the energy in the rear-mounted battery pack.

The regular 1.5-litre petrol engine is capable of 98 PS/127 Nm and the electric motor develops 109 PS. While the combined power output is not officially divulged, Honda says the combined torque produced is 253 Nm. There are three different drive modes: a petrol-only mode, an electric-only mode and a petrol/electric hybrid mode. It also boasts brake energy regeneration tech.

In addition, Honda could offer ADAS based features such as autonomous emergency braking, lane keep assist, lane departure warning, collision mitigation braking, automatic high beam, adaptive cruise control and so on. These safety features could be added to the standard Honda City as well.

In terms of exterior design, Honda City e:HEV will be largely similar to the standard version, but there will be a few differences here and there. The teaser shows a sporty tailgate-mounted spoiler, along with piano black highlights on the taillights. We expect the chrome highlights on the front grille to be replaced by piano black elements as well.