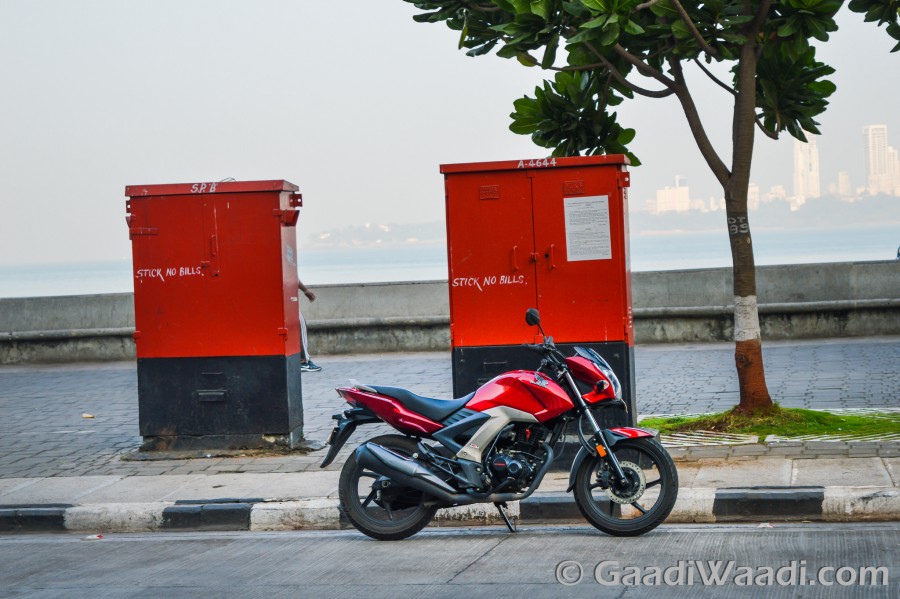 The Honda Unicorn needs no introduction, you have been seeing the brand name since the year 2005. You are bound to see everyday which your next door neighbor rides every day to the office. Even if you are reading this review in the middle of the night and you go to your balcony, you can spot one within 15 minutes.

Unicorn clearly the uncle’s bike and it is seen in spades. Honda sold almost a million units till date. The Unicorn has seen many changes since. Unicorn got alloy wheels which replaces the spoke wheels, the styling got changed, then we got an upgraded 150cc engine which made more power and torque.

November 2014, the most popular and anticipated version of the bike came out with fresh styling and a new 163cc heart. We have had in our long term garage for almost two months now and we have clocked exactly 2200 kms on it. Let’s find out what how it kept us impressed till date and what things aren’t the very best about it.

Styling wise it is a breath of fresh air as the predecessor was large and bulky and looked very substantial and one of the reasons why it was hit in our market where the performance and stability of the motorcycle is decided by its looks and not by a test ride. Since it is a Honda, everyone booked it the moment they saw and needed one trusty slightly more powerful motorcycle from the ordinary 100cc class.

Honda has used multiple colors such as the body color, the all black theme in the lower part along with a golden side panel which makes it stand apart. LED tail lights and sleeker and larger downward flowing headlight looks and works very well. The stubby muffler looks sporty and bikini fairing is an idea well laid on the bike.

The criss cross hallow footrest holder reminds you of first generation Hero Honda CBZ. However, it still looks best in its traditional black color, our test bike is cherry red and yes, it still manages elder’s attention despite being sleeker as it still has a contemporary and conservative design.

Comfort is suppose to be better and it is. Front set pegs, upright handlebar, well padded, single piece seat means both can enjoy the ride. Mirrors are really good and offer great visibility. Quality is average, but fit and finish levels are excellent as well and there is nothing left loose. There have been no rattles on highly abused 8000 km motorcycle before service.

The speedo is all digital and has everything you need. Two trip meters, time, tachometer and two buttons such as mode and trip to set the clock and reset the meters. Switchgear as always is the worst part of the motorcycle as it looks cheap but doesn’t feel like one so we feel irritated to the very limit. Indicator isn’t that quick to react, but everything else works very well and clicks are precise.

The 163cc is a peach, a beauty whatever you want to call it. It is just brilliant. An engine, which is based already a successful unit witnesses an increase in compression ratio and stroke to make more torque and displacement and slightly more power is a recipe for fun and reliability at the same time. The oil filter case has vents on the outside for goodness sake to give you hint’s how potent and dedicated the engine performance is. The power band is always sorted out on Honda’s but this is just even more precise. Relentless low-end torque with traditional tall gearing and a very short overdrive gear means perfection.

Ample low-end torque means you don’t need to rev above 5000 RPM, keep shifting up and reach fourth gear and enjoy the super punchy mid range. Reach 80 km/hr and stay in fifth and roll on the gas. Even with any road conditions and even large riders (around 100kgs) like myself see’s 115 km/hr on the speedo just like that. On a deserted highway with less wind and traffic on day one of the long termer we saw 125 km/hr and were stunned. Stunned because it was done without ducking down.

All thanks to a short overdrive (fifth gear) and as always larger sprocket at the rear and shorter sprockets on the front, traditionally and truly Honda. All of this was almost present in a previous 150cc bike, but as you went higher and higher cruising speeds, the economy drops tremendously. Not with the 163cc peach power plant here.

The bike weighs almost 15 kgs lighter than before which makes it more economical and obviously HET is always applied to the engine. NVH levels are good, but there are vibes between 5000-6000 RPM which is noticeable, but surely not annoying.

Despite doing 100 km/hr at any given time, the bike is able to return a whopping 47 km/l. The mileage has gone almost 6 km/l higher than the CB Trigger/Dazzler/Unicorn of the past. These are constant numbers over the past two months with several full tank to tank basis figures. Post service numbers should higher as the oil in the bike and air filter are due for replacement.

Gearbox is smooth and precise, but when you stop from a higher speed, despite a constant mesh gearbox, it still needs torque. Which means you need to rev it a bit and depress clutch to get from fifth to first gear if you come to stop without dropping down the gears simultaneously. This clearly needs an explanation.

We have had this zeal for Honda engines. The over sprocketed, high fuel sipping engines, but this is also efficient to quite an extent. Unicorn manages does to do solid performance numbers, which make clearly a very potent choice in the category which frankly still stands strong despite stiff competition from the Bajaj Pulsar 150. Overall, an engine has finally been bonded with the Honda Unicorn’s chassis which finally does justice to it.

Dynamically, the bike has the same chassis as the Trigger and get’s its 17-inch wheels instead of old Unicorn 18-inch wheels and heavier chassis. The only thing which bites is that why does every single Honda in India has a humongously long wheelbase. Turn-in in slow, rake is, as always, on the higher side. All of this does mean high speed stability should very well, but there is still room to complain.

Since it is almost 15 kgs lighter, the bike is clearly very agile and very quick and nimble in traffic. Long wheelbase means high speed stability should be good, but it isn’t. Since the engine is powerful and does chassis justice, the front-end does wobble around, a bit only though, at very high speeds on a highway which has crosswinds.

Tyre’s are MRF and they do the job well once they are warm enough on then, the twisty road isn’t a problem. Braking is very good as always, thanks to 3 piston caliper at the front and drums at the rear which are connected thanks to CBS system. The smaller middle piston on the front caliper is applied when you apply the rear brakes so braking is balanced and turns out to be a comfortable thing in stop and go traffic as the nose doesn’t drop

So all of you folks must be like. How can this be, this review looks like biased and we have been talking about good points more than enough. Sure we haven’t criticized the front set pegs which we have been always complaining about, the non-sporty riding position, the not so good tyres, unhinged petrol tank cap, and there isn’t much fun associated with the motorcycle dynamics. All of this has been spared because for people like you and me there is the Honda CB Hornet 160R is on its way and the launch is very close.

It should have everything that we have criticized Honda over the past. And if it doesn’t, then things can get bad. However, we are pretty sure these things, the demanded items, will be there and if they come with this angel of an engine, then it is going to be one bike which is going to be hard to beat! Unicorn 160 continues to be a hot favorite and after experiencing it more, we can clearly see easily living with it for the term left ahead as it is going to be a much better post service that it has just gone for.