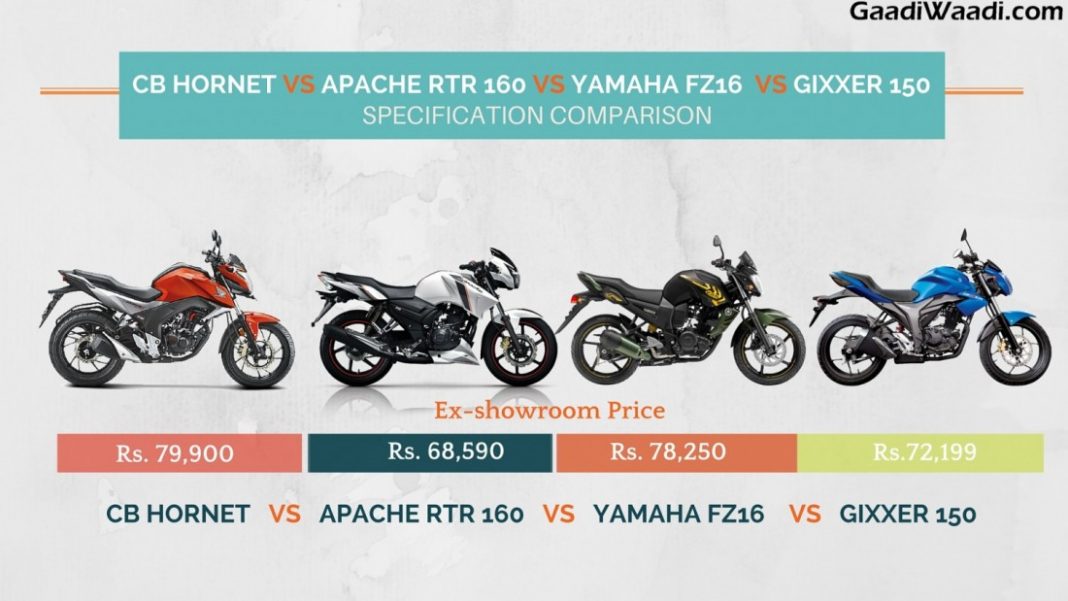 We have been repeatedly telling you that the battle has just got intense with the entry of the CB Hornet 160R. It’s key rivals are in the segment and in the industry since a very long time and have almost set benchmark when it comes to their offering. Hence everyone is giving it their own shot and carving their way in.

Latest Entrant is the CB Hornet 160R which comes with the legendary name of the naked motorcycle series that Honda makes since ages. We tell you on paper statistics and who seems to be nearest winner when it comes in real life. Styling wise the RTR 160 is the most substantial looking bike of the lot. Large bikini fairing, stubby yet edgy looks makes it look good and sporty in the right colors. Gixxer and FZ on the other dimensionaly are quite similar. Identical wheelbase and similar kerb weights are shared. Looks like the FZ got the MT series headlight which isn’t as macho as before for sure.

Gixxer got its headlight from the Hayabusa and it is working very well with us Indians for sure. Hornet is just looking like the Hornet’s of the past. Focused street fighter with toned down sporty Honda styling. The elements which it has such as the tank, headlight, bikini fairing and unique tail-piece make it stand out along with multiple color used on every body panel. Overall, every one holds its place well but we think Gixxer, Hornet, RTR 160 and then FZ wins in that order. On paper CB Hornet 160R has the most horsepower. Straight line performance is also good on the RTR 160. Capacity and horsepower king is the Honda 163cc and 15.8 PS of power which is a shockingly positive move by Honda.

Meanwhile Gixxer stands at 155cc 14.8 BHP and FZ has gone down to 149cc and 13.1 BHP. It also makes the least horsepower and torque of the lot but Yamaha says sprocketing and other tuning has helped them shave of a second over the previous 0-100 km/hr timing.

However the Gixxer has clever gearing which makes sure it is almost 5 seconds faster than the FZ and we think Hornet 160 will have faster timings than the Gixxer most likely. Which makes the FZ come last in the overall performance test. We will see what the Honda does as Unicorn 160 is slightly ahead in mid range and top end performance. All bikes on paper are great. TVS RTR 160 has a traditional chassis and suspension which makes It a neutral handler. However, these Japanese bikes are making very precise handling street fighter and Yamaha is aces as it is lighter of the lot and is known to be great.

Gixxer comes up next as it has the same hardware. Honda is also offering similar hardware, but not identical which should make things easier. Taller profile tyres, a larger wheelbase and much more. Braking wise all bikes have drums at the rear and disc at front, but Honda is offering petal disc at both ends which makes it a sweet deal.

Well as of now Gixxer has been winning the test in both naked and faired version. RTR 160 is a great bike, but as a package it is good but not great as it is outdated a bit despite that cracking motor underneath.

FZ is lacking performance on open roads but its fine enough for city duties which doesn’t make it a complete winner. Hornet on paper statistics have turned out to be more than impressive. The fight between Gixxer and the Hornet is going to be very, very close.