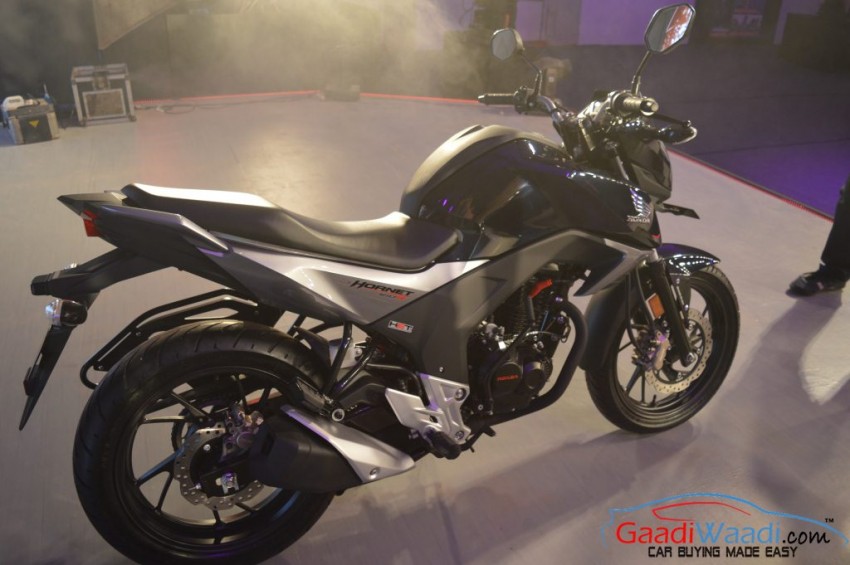 The Hornet series of motorcycles are extremely well regarded and serious naked motorcycles from the Honda stable which give the perfect blend of performance and carry the Honda Forte with them. CB Hornet 160R looks very much inspired from CX-01 motorcycles that was showcased at the Auto Expo 2014. The headlight and tank shrouds are surely taken the inspiration from the concept motorcycle. The CB Hornet 160R does look very aggressive and bulky at the same time. Faux plastic on the side makes it look it has a perimeter frame, but it doesn’t as this become the fashion with category of motorcycles. Cladding that runs on the tank gives it a tough look. CB Hornet 160R has very good looking stubby exhaust something its rival like the Suzuki Gixxer also has. The bike gets CBS and petal disc on both end which is segment first. Cycle parts like mirrors, switchgear and instrument cluster remains the same. Single seat continues to be an eye sore but its more of an comfortable option. Minimalist is the design of the CB Hornet 160R and yet the CB Hornet 160R has a very substantial stance. The tyres and suspension is on the fatter side, the alloy wheels are new and all of these are key element of the bike that will put it bang on against the FZ and Gixxer. Powering the CB Hornet 160R is the same 163cc engine that produces 14.5 BHP of power and 14.6 Nm of torque from a air-cooled, single cylinder engine. The CB Hornet 160R will continue to put the power down through a 5-speed gearbox. The sprocket at the rear must be a bit higher as it will put the power down much more quickly and will give it similar acceleration timing as the Honda CB Unicorn 160.. CB Hornet 160R is priced well and should find a lot of buyers. Honda fans should be happy about this product as it finally competes head on with the competition. We can’t wait to get our hands on it as it carries a name that has to fight and stand by its own legacy at the same time.