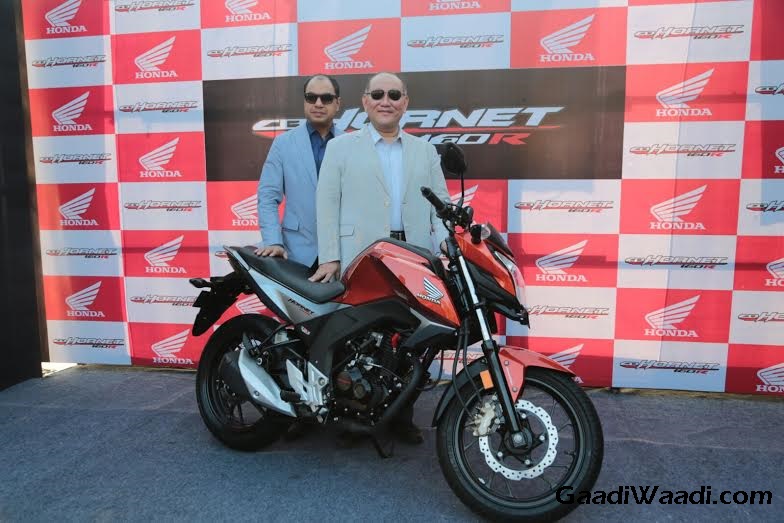 Honda hasn’t had much success in the 150-200cc motorcycle segment in India despite many attempt right from Unicorn 160, Trigger, Dazzler and even with CBR 150. After numerous attempts, Honda engineers finally developed a product that will do the Job pretty which Honda is trying to do from last 3-4 years in the segment. The all new CB Hornet 160R, first showcased in RevFest this year is finally launched in India today. The new bike is squarely aimed at the FZ, Gixxer and Bajaj Pulsar 150 which is king of the segment in sales and rest have substantial numbers to boast about.

The Honda CB Hornet 160R is built on a tubular diamond frame and design elements are inspired from the CX-01 concept. Deriving its moniker from the legendary Hornet naked motorcycle series, it has substantial looks whilst being dimensionally similar to main rivals Gixxer, FZ and Apache RTR. It has the highest power and torque figures compared to its segment competitors with only a five kilogram weight penalty against the heavier Apache RTR 160. It has significantly larger disc brakes with 276mm at front and 220mm at the rear when pitted against the trio along with offering pedal discs on both sides. Here’s everything you need to know about the highly-anticipated motorcycle from Honda: The Honda CB Hornet 160R is powered by the same 163cc single-cylinder engine which does the duty in CB Unicorn as well but produces more power at 15.8PS @8,500rpm power and 14.7Nm of torque @6,500rpm mated to a five-speed gearbox. The power and torque are highest in the segment.

The Honda CB Hornet is expected to return a mileage of 57kmpl, but it may vary on the riding condition. We will update the actual mileage figures soon.

On paper, the Claimed top speed is 110 kmph but it can reach above 125 kmph easily. Dimension:
The Honda CB Hornet measures about 2,041mm in length, 783mm in width, 1,067mm in height and 1,345mm in wheelbase. Its fuel tank capacity is of 12 litres and has kerb weight of 140kg for single disc variant while 142 kg for CBS version. Suspension is typical as telescopic forks at the front are now beefier and monoshock at the rear are doing their duties. Tyre wise, though there is something new. 100×80 at the front and 140×70 at the rear which are radial tyres and are different than the competition in size and type. Bike has petal disc on both ends along combi braking system. Petal discs at both ends are segment first as all bikes have drums at the rear and drilled rotors at the front.