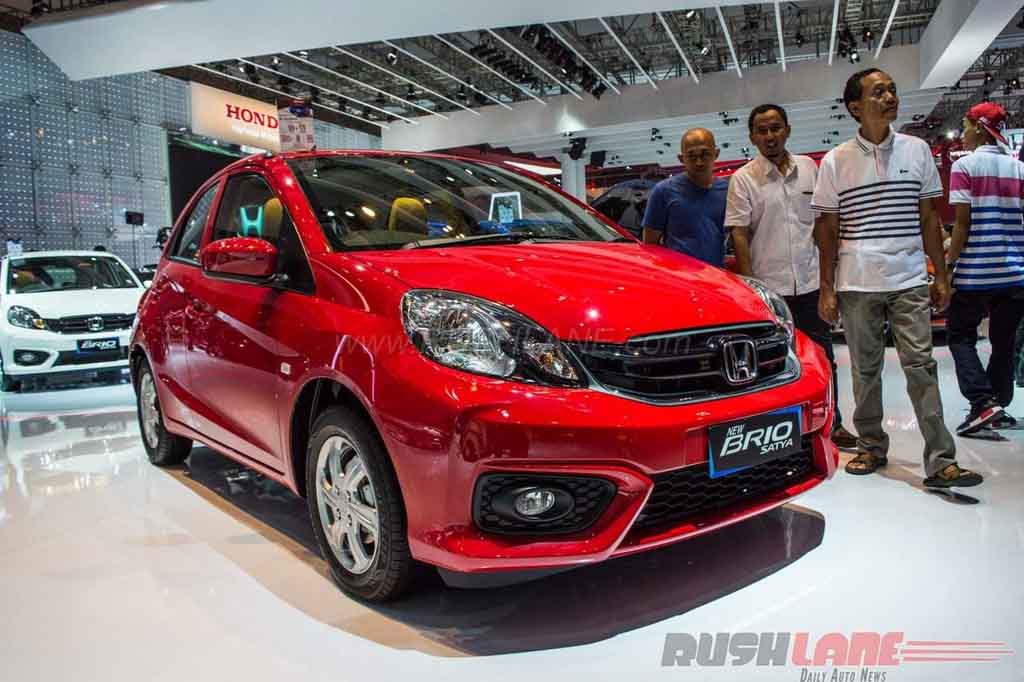 Honda Brio facelift have been spotted quite some time on Indonesian roads. Now the Japanese automaker has showcased the car officially at the ongoing Gaikindo Indonesia International Auto Show 2016. Honestly, the car looks much aggressive compared to the pre facelift model. Also it features the similar front fascia with the Honda Amaze facelift. The Amaze facelift has been launched in India few months back.

The Honda Brio facelift gets a new bumper and new radiator grille as well. The front grille gets a sleek glossy black metal bar running between the headlamps with chrome trims above and beneath. The metal bar holds the Honda logo at the centre. The headlamps come identical with the pre facelift version. The biggest change is the front bumper. It sports large air intake. The fog lamp enclosures come black accented. The side profile comes with 14 inch alloy wheels, subtle character lines. The rear profile also gets new design taillights. Inside the cabin the new Honda Brio facelift sports several tweaks. It come with more upmarket appearance. The multifunction steering wheel, three analog dial and a small LCD display consisting instrument cluster, a sleek digital display at the centre console has made their way into the cabin.

The dashboard features a new design, which is sharper. The air condition control panel gets a digital look and Eco indicator. The cabin features a black and beige interior theme. The seat upholstery has been updated and they come more upmarket. In Indonesian market the car is priced between Rp. 129.6 million to Rp. 174.7 million. The Indonesian market spec Honda Brio draws power from a 1.2 litre four cylinder Euro 4 SOHC i-VTEC petrol engine. The engine is mated to a 5 speed manual gearbox and a CVT gearbox is on offer as well. The power and torque output has been increased by 2 PS and 1 Nm. The Brio facelift churns out 90 PS of peak power and 110 Nm of peak torque.