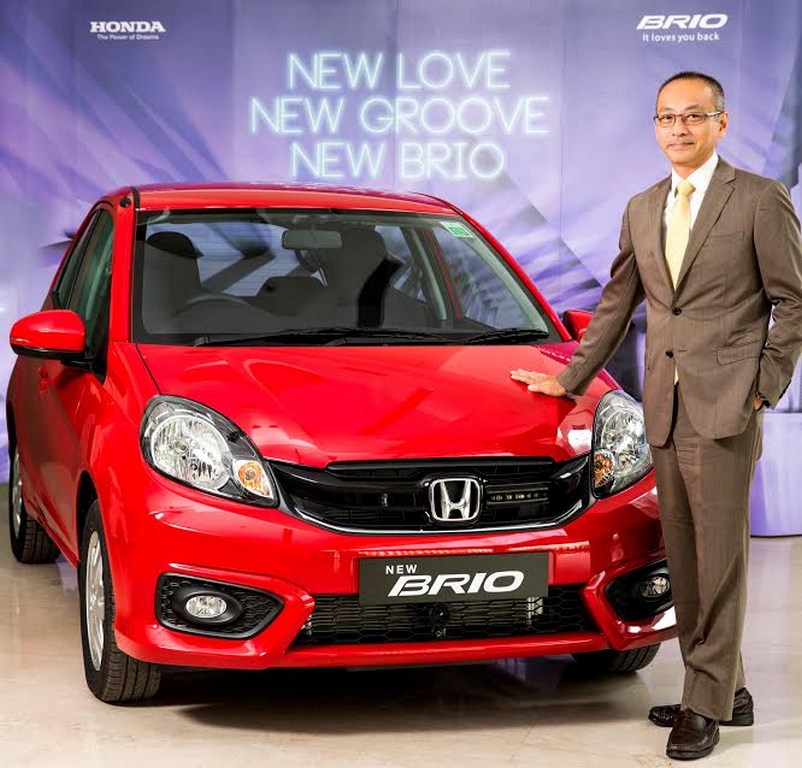 Honda Brio facelift has launched in India right ahead of festive season. The facelift version of the hatchback comes with revised front grille, front bumper and interior as well. In terms of styling, the Honda Brio facelift shares several similarities with the Honda Amaze facelift, which was launched earlier this year. The car looks much more aggressive and sportier than the outgoing model. Earlier this year in April, the car was displayed at the Gaikindo Indonesia International Auto Show. Despite the updated exterior and interior of Honda Brio facelift, powertrain of this car remains unchanged.

The compact hatchback segment in Indian market is a highly competitive space, and Honda Brio is quite popular in the segment. With the introduction of facelift model the automaker is expecting a good sales result. Honda Car India launched BR-V and Amaze facelift in different segments in recent months, now the Brio facelift is here to revive the company’s presence in hatchback segment. Here’s everything you need to know about the 2016 Honda Brio Facelift: Honda Cars India Ltd (HCIL) has launched the facelifted version of the Brio hatchback today for a starting price of Rs. 4,69,000 for the E MT base variant and it goes up to Rs. 6,81,600 for the range-topping VX AT model. It comes featured with updated exterior and improved interior offerings. With the standard 2 year/ 40,000 km warranty, the prices for the new Honda Brio are as follows (ex-showroom Delhi):

Underneath, the 2016 Honda Brio is strapped with the same four-cylinder 1.2-litre i-VTEC engine that delivers maximum output of 88 PS at 6,000 rpm and torque of 109 Nm at 4,500 rpm. It comes mated to a five-speed manual transmission while a five-speed automatic is only offered in the top-end VX grade. Fuel economy is rated at 18.5 kmpl for the manual and 16.5 kmpl for automatic. The front fascia of the Honda Brio facelift comes heavily revised with a new front grille and front bumper. The headlamp cluster in facelift version remain unchanged. The front grille comes larger than before with high-gloss black and chrome finish, and it sports a thick black bar between headlamps; while the front grille also gets a sleek chrome trim enhancing appeal. Apart from that, the Honda Brio facelift gets a revised bumper with larger air intake. The fog lamps are positioned at the faux air intakes at both sides of bumper. So far, Brio facelift’s front fascia gives the car a bold and sporty look. The alloy wheels of Brio facelift sport similar design like pre-facelift model, and glass area is also blackened out.

he front bumper is restyled and the rear gets an all-new tailgate spoiler with LED high-mounted stop lamp and a youthful set of tail lamps. Dimensionally, upcoming Honda Brio facelift is similar to the outgoing model. It measures 3,610mm in length, 1,680mm in width, 1,500mm in height and 2,345mm of wheelbase. Apart from that, it comes with 65mm of ground clearance, 175-litres of boot-space and 35-litres of fuel tank capacity. Like the exterior, Honda Brio facelift’s interior also receives a host of updates. It shares the dashboard with Honda Amaze facelift and Honda BR-V. Moving to the inside, the updated Brio is equipped with carbon finish and silver accents on the instrument panel along with well integrated AC vents. The instrument binnacle has newly designed triple analog metre with white illumination. The Brio also offers an Advanced 2 DIN Integrated Audio USB and Aux-in with Bluetooth connectivity and Hands Free Telephony function. The Digital AC controls with Max Cool Function in the new Brio ensure a hassle free and comfortable drive for the occupants. It is also being made available in sporty black interior theme for the high-end variant besides beige interiors for the low-level versions.