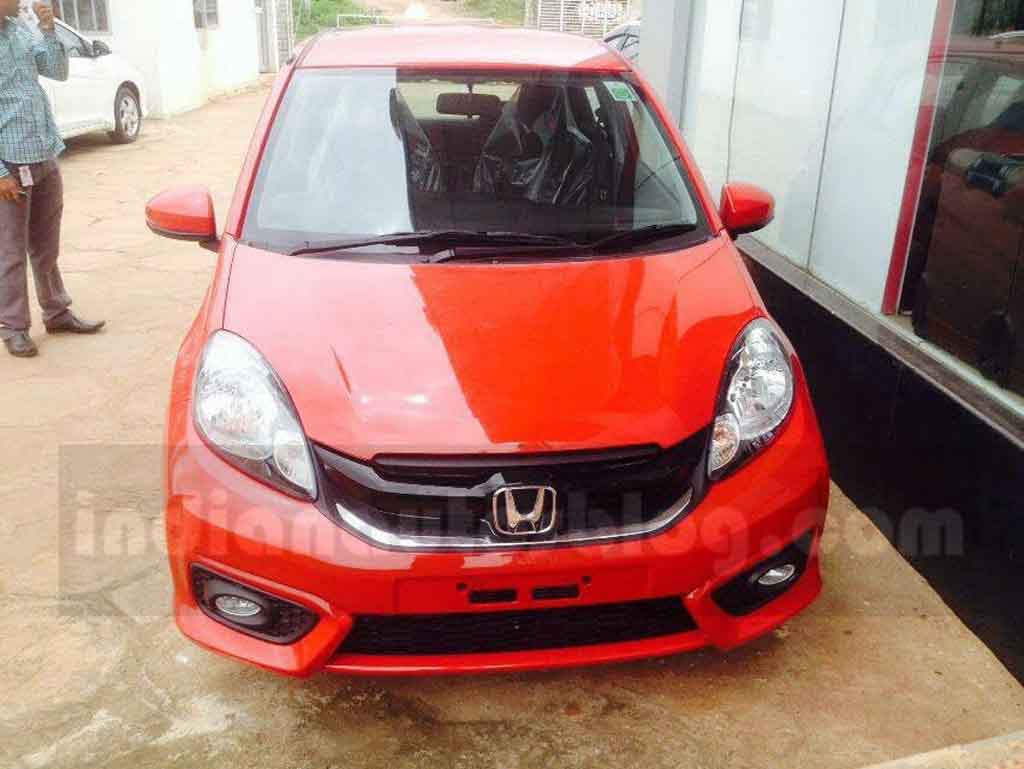 The front fascia of the Honda Brio facelift looks similar to the Amaze facelift, which was launched earlier this year

Honda Brio facelift is all set to launch in India, and ahead of the launch the car has already arrived at Indian dealerships. The car has been spotted for the first time on Indian soil ahead of its launch. The car comes with a front fascia which looks similar with the Honda Amaze facelift, which was launched earlier this year.

Honda Amaze facelift has been already showcased at the 2016 IIMS in Indonesia earlier this year in April. The car looks sportier with the revised front fascia. It comes with unchanged headlamp clusters, while the radiator intake has been enlarged and the front bumper also sports dual faux air intakes at both sides, which house the fog lamps. So far, the front bumper looks bolder compared to the outgoing model. The front grille sports a chrome trim and it comes completely different than the outgoing model with a thick black bar joining the headlamps and the Honda logo sitting at the centre. At the side profile the alloy wheel designs are intact, with the glass area blackened out. The rear profile also comes without any change at all, as it features a roof spoiler with high mounted stop lamp, delta shaped taillights, and beefy bumper.

The interior too receives some changes, which include a new dashboard, resembling with the Honda Amaze facelift and the Honda BR-V as well. The interior looks sporty with the black theme combined with sleek chrome trims. It gets a multifunction three spoke steering wheel, analog dials and digital MID at the instrument cluster and a sleek centre console with a 2 DIN audio system. The instrument cluster in the facelifted Honda Brio looks new with new dials also. While the exterior and interior comes sporting changes, the powertrain has been retained from the outgoing model. The Honda brio facelift takes power from the same 1.2 litre i-VTEC four cylinder petrol engine paired with a five speed manual transmission. The engine churns out 88 PS of peak power and 109 Nm of peak torque. Also, the Japanese automaker could offer a CVT as well, but it is not confirmed yet though.