Google Maps is a great tool for navigation, but taking it too seriously can lead to disaster, as this Honda Amaze owner recently found out

In this day and age, technology has permeated every aspect of our lives. While it has certainly made our lives better, too much reliance on tech can have horrible consequences, which come to light every now and then. Here, we have one such incident, in which a driver drove his car into a pond following Google maps’ instructions.

The incident took place in Andhra Pradesh, and the images of the accident were shared by the owner of the car involved, Shivaram Balajepalli. As per Shivaram, he input his destination into Google maps and was driving following the system’s instructions. However, the system diverted him to an alternative route, which led him into a pond. The driver reported that the water level was quite high, although not high enough to reach the air intake.

After the vehicle was pulled out of the pond, the engine was running fine until the car reached a service station. However, the engine check light soon lit up. The service centre informed the owner that flood damage isn’t covered in his insurance, which was a major cause for concern. 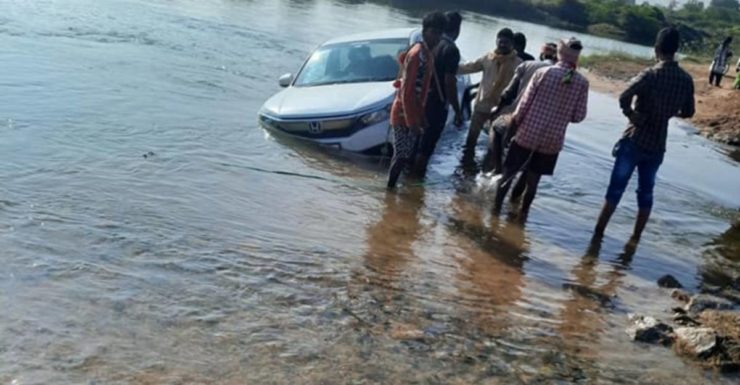 Thankfully, a few cranks later, the engine started running smoothly once again, with no signs of water damage. Water entering through the air intake or exhaust can seriously harm a vehicle’s engine, which is why one should always be careful while driving in flooded areas, or avoid such paths if possible.

This isn’t the first incident when relying on Google maps has led drivers into unsafe places. Earlier this month, a man drowned after driving his Toyota Fortuner into a dam following the map’s instructions. In October last year, a man drove his Tata Harrier into a river bed at night in a similar way, although he and his car were safely rescued.

While Google maps are extremely useful for navigating within city limits and avoiding traffic during a commute, it’s not a flawless system. It is imperative that people use caution and common sense while following the system, and never be afraid to ask locals for directions.