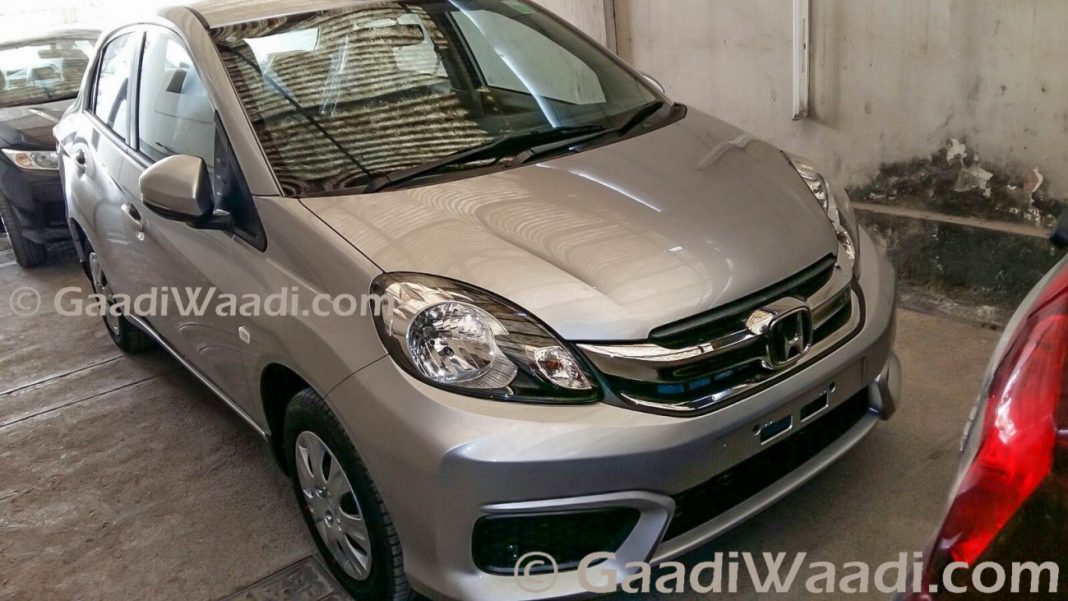 We brought you the exclusive pictures of the facelifted Honda Amaze a few days back and revealed that it will be launched on the 3rd of March. The sub-four metre sedan saw the daylight on Indian shores back in 2013 and for a good span of nearly three years it greeted customers without any changes inside and out. Honda introduced the CNG-powered Amaze last year but it didn’t go well as the Japanese manufacturer would have planned.

With Maruti Suzuki having updated the Swift Dzire in the early months of 2015, Honda has certainly been late to the party but it’s one of the significant models for the company in terms of volume sales and the facelift could prompt more customers move towards the Amaze and save it from declination encountered in recent times. We have come up with the five important things you need to know about the long-awaited facelift version of the Amaze sub-compact sedan:

Honda Cars India has organised a press conference on the 3rd of March but the company hasn’t revealed any details about why it’s for. The probabilities of it being scheduled for the launch of the facelifted Honda Amaze are highly likely.

The India-specific 1.5-litre i-DTEC DOHC diesel engine will continue to produce 99 bhp at 3,600 rpm and 200 Nm at 1,750 rpm. The 1.2-litre i-VTEC 16V four-cylinder SOHC petrol motor develops a power output of 87 bhp at 6,000 rpm and 109 Nm of torque as the outgoing model. Both engines will be coupled with a five-speed manual transmission sending power to the front wheels with the petrol having an option of automatic transmission.

The 1.2-litre petrol motor will remain returning 18 kmpl for five-speed manual and 15.5 kmpl for the automatic variants. The 1.5-litre will give out an ARAI certified mileage of 25.8 kmpl. However, as Maruti did with the Dzire, the engines could be slightly tweaked for better efficiency. 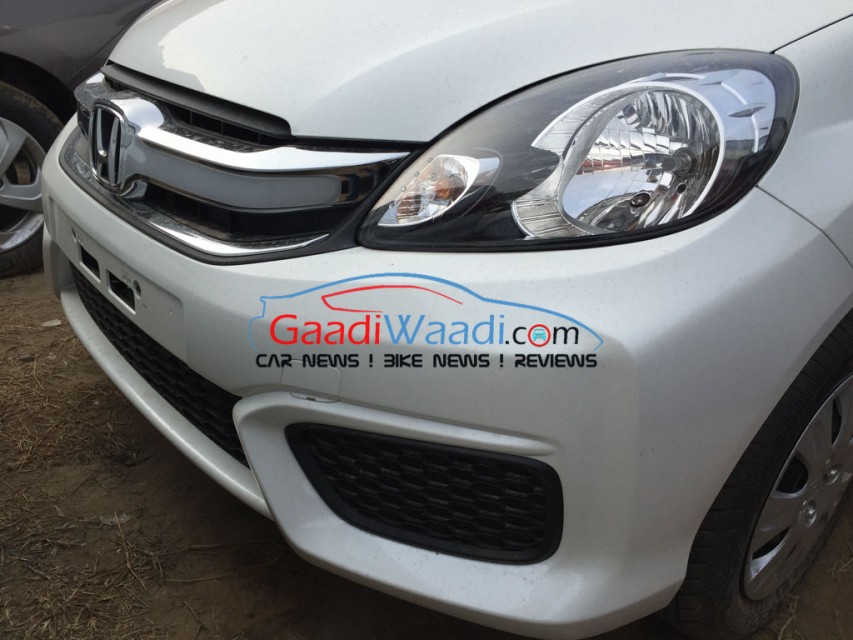 The 2016 Honda Amaze will have minor cosmetic changes as the front end will boast a prominent chrome grille as seen in the City sedan. The fog lamps have received new enclosures with the front bumper taking design inspirations from the Mobilio MPV. With the side profile remaining the same, the tail lamp cluster gets a new design with clear lens and the rear bumper looks sculpted. It will more likely have newly designed alloy wheels and the elliptical headlamps taken from the Brio has been retained. 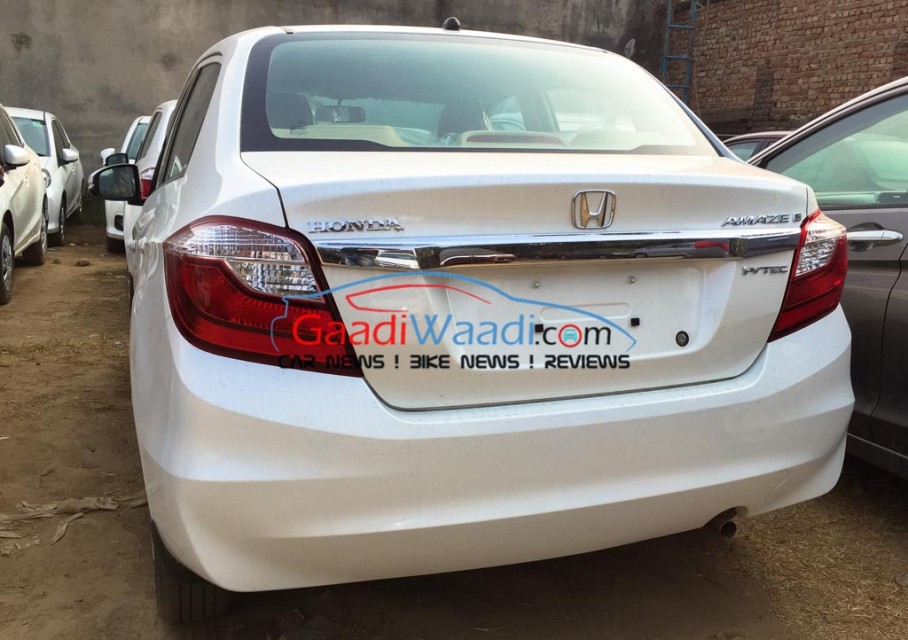 Honda has responded to customers’ complaints as it addressed the lack of substance inside the cabin. It gets fresh new dashboard derived from the upcoming Honda BR-V SUV with instrument cluster reminiscent to that of the premium Honda Jazz hatchback. The recently updated Mobilio in Indonesia has a lot to do with the revised interiors of the Amaze as the sedan has been treated with a new centre console and AC vents rectangular in shape. The upholstery and dual colour beige and black scheme will be carried over. 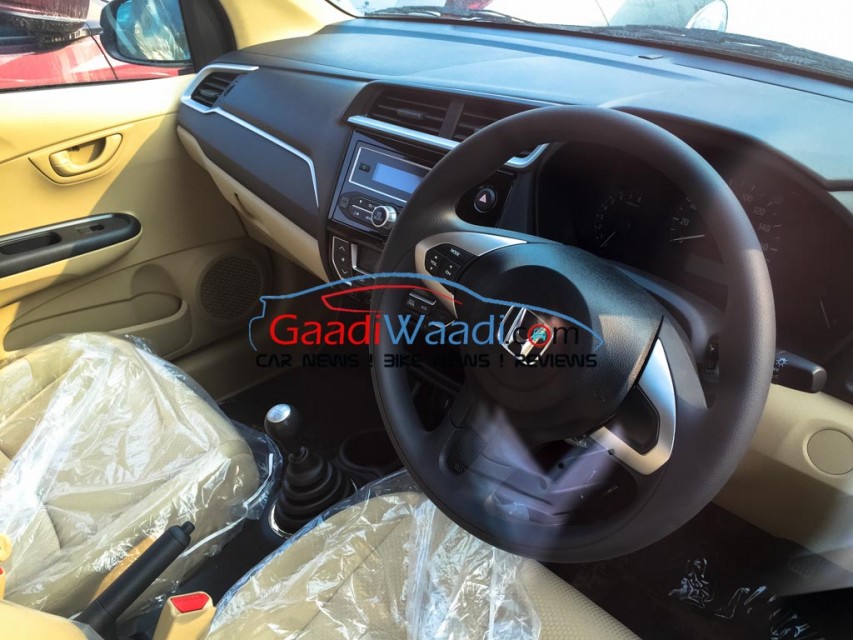 A new AVN system with the much needed automatic climate control function will be introduced. The middle variants will have 2-DIN music system with Bluetooth functionality while the top-end variants will be an engine start-starter button and come installed with touchscreen infotainment system. 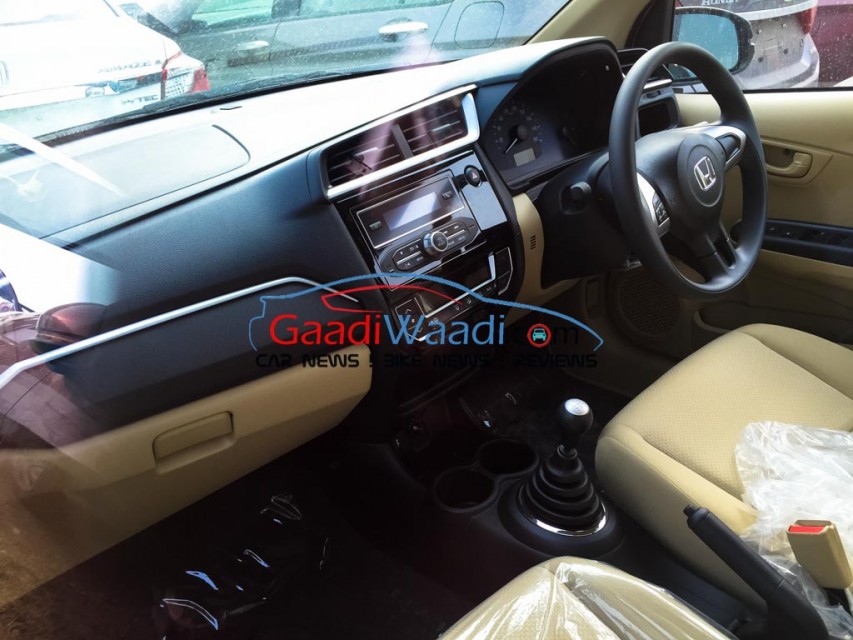