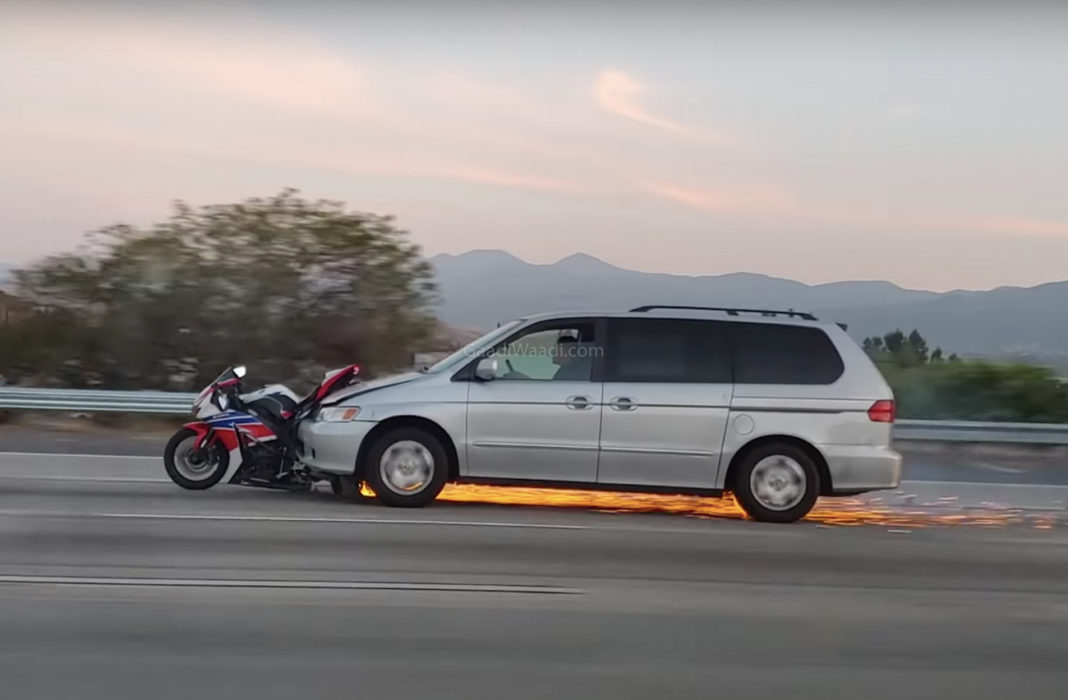 While driving on the motorway, a man caught a crazy incident on his phone camera and it instantly went viral. The driver of a minivan was speeding down the 91 Freeway with a motorcycle wrapped around the front bumper in a weird fashion and the scene took place around 7 pm on Friday in California on the eastbound lanes in Corona.

The heavily damaged minivan was spitting fire underneath and knowing that he could not continue long, the man pulled over and ditched the vehicle and fled off the freeway in McKinley. According to California Highway Patrol, the hit-and-run occurred when the minivan struck a motorcyclist and did not stop. Luckily, the rider was said to have only endured pain to legs and arms.

The man from Corona was arrested the following day for felony hit-and-run. George Valentin was taken to custody on Saturday as the 25-year-old is being held at Robert Presley Detention Center after the shocking incident. Chain Arunritthirot, the motorcyclist spoke about what happened and he said he was thrown 200 feet away due to the impact.

The collision was right in the middle of the freeway and he was perplexed over what really went down. He felt that the hit-and-run was “..intentional, like he hunted me down” and could have easily got killed, as he spoke about the incident in an interview with CBS2/KCAL9. According to estimates, the motorcyclist was riding at a speed of around 65 mph when the minivan rammed into the back of his Honda.

He hit him at 70 mph and did not stop. Such was the impact, the motorcycle was wrapped around the front bumper of the minivan and Valentin dragged it along without giving a darn. He eventually stopped and fled on foot into a drainage wash. Despite the attempts from witnesses to stop him, he left the scene. The video was captured by Natalie Duran and Will Ross and they called CHP.

Arunritthirot further explained that he was still in shock and thanked Duran and Ross for capturing the incident that led to the arrest. The hit-and-run is still under investigation as California Highway Patrol suspects that neither alcohol, nor drugs involved in the case.