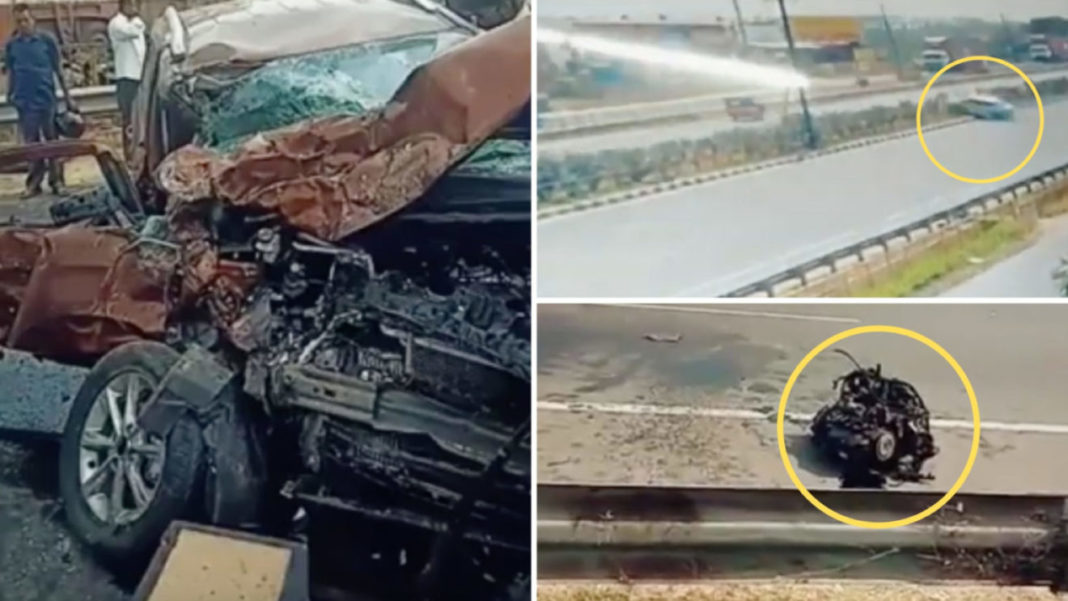 An uncontrolled first-gen Maruti Dzire jumps median and crashed into Ford EcoSport; the gruesome accident shows the robust build quality of the EcoSport

Indian roads are not the safest in the world and over time, accident data has proved the same. Out of everything, overspeeding is one of the most dangerous things to do on the Indian roads. In the latest accidental case, the CCTV footage shows how driving at high speed can become extremely dangerous and can turn out to be fatal too.

The accident took place on the highway on Coimbatore and Salem in Tamil Nadu. The six-lane highway is relatively empty and is well-barricaded on the sides too. The video shows a high-speed Maruti Suzuki Dzire overtaking a slow-moving vehicle from the right-hand side and losing control over the car completely.

The sedan can be seen steering across the road at extremely high speed and hitting the road divider. The speed of the vehicle is so high that it crossed the wide central divider and hits a Ford EcoSport coming from the other side head-on. Due to the high-speed of the Dzire, the Ford EcoSport could not steer away from the flying vehicle in time.

The impact between both cars is severe, and the video from the mobile phone shows parts of cars lying around the road. The engine of the Dzire fell in a different direction due to the high impact. The gruesome accident shows the robust build quality of the Ford EcoSport. The footage shows that the vehicle’s front-end is wrecked, but the cabin remains intact.

There is damage to the right-hand side A-Pillar, but it absorbed the impact well. The video also shows that the front airbags of the EcoSport have deployed to save the passengers. In most of such cases, the doors get stuck and can’t be opened, but we can see that both the doors of the EcoSport are open.

The condition of the occupants in both the cars remain unknown but they appear to have been badly hurt in that horrific accident. It should be noted that the Ford EcoSport has received a 5-star rating in the Latin-NCAP. It variant tested there gets similar dual front airbags, ABS+EBD and ISOFIX child seat mounts.

In the Euro NCAP tests, the EcoSport scored four stars. In the latest NHTSA rating of USA, EcoSport scored three stars. The Indian-spec vehicle remains to be tested by NCAP, but it is expected to score a similar rating to the Latin NCAP.