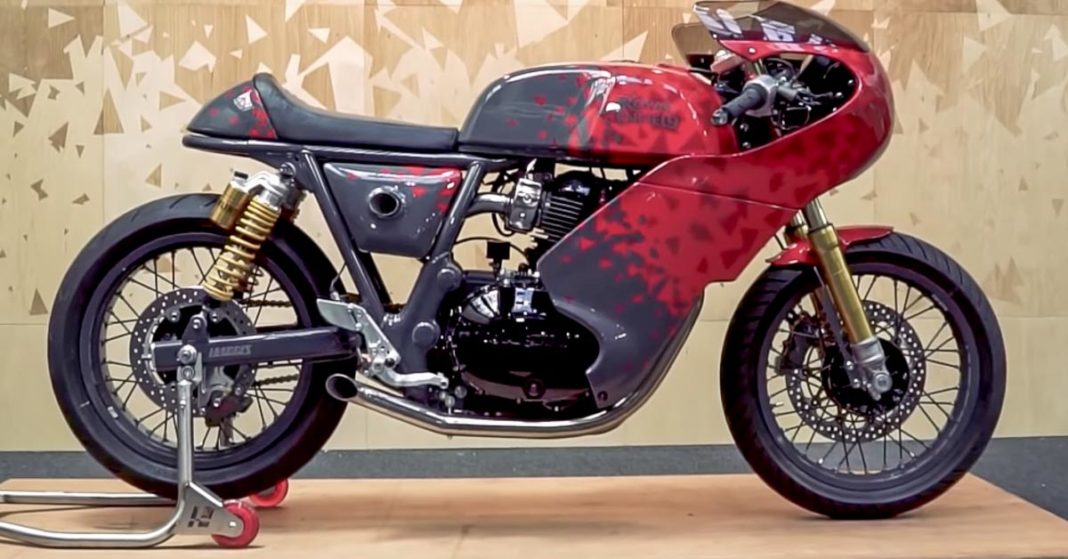 Royal Enfield and Harris Performance took the standard continental GT 650 for two special projects include a retro-styled cafe racer to showcase its customers the potential of RE bikes. The ‘Nought Tea GT’ name came about because Lester Harris loves his tea as and it sorts of infused the humour and at the end of the day tuning motorcycles is about having fun right?

The custom machine involved in the project is the first step towards racing and is actively developed with performance tuning on track. The more track-focused version could go vintage racing as well in the near future. Back to the Nought Tea GT, it is basically a stripped and completely rebuilt version of the regular Continental GT 650.

The latest video from Bennetts Bike takes us through the developmental stages of the custom cafe racer before it was revealed at the 2019 Bike Shed show in London. The nearly 15-minute long footage shows the level of commitment put into this bike and the mechanical changes made. They include a set of different front forks, callipers, brakes and a unique adjustable triple clamp setup.

The engineers started with the design of the front end first as the Brembo discs and callipers were no more as they opted to go with new rims laced onto the hubs to accommodate bigger tyres. The dimensions of the front yokes were calculated to be adjustable for offset. It helps in fine-tuning the steering by changing the inserts on yokes.

Other changes include modified inlet tubes and throttle bodies along with the replacement of the stock exhausts pipes for a newer one with a larger radius and bend angle complementing the custom style. The ergonomics have been altered to suit the track riding style with a different handlebar and there are adjustable footrest plates to tune the riding position.

They are positioned further back from the stock version as three different positions allow for more flexibility in handling. The chopped off rear end has fabricated tube to match the profile of the seat and as mentioned above the wider rim onto the stock hub offers the mounting for bigger tyres.

The accentuated industrial design of the cafe racer with the appealing fairing should not make you overlook the shorter subframe in line with the rear and the regular swingarm modified to give rise to the new axle and chain along with the custom wheel adjusting mechanism for the ease of tuning.

For shakedown, the Nought Tea GT was taken to Bruntingthorpe Aerodrome where it was tuned for flickability and weight balance before hitting the show where it received tremendous attention. After seeing the video, who wants Royal Enfield to build a production cafe racer based on the 650 cc platform? We certainly are raising our hands!