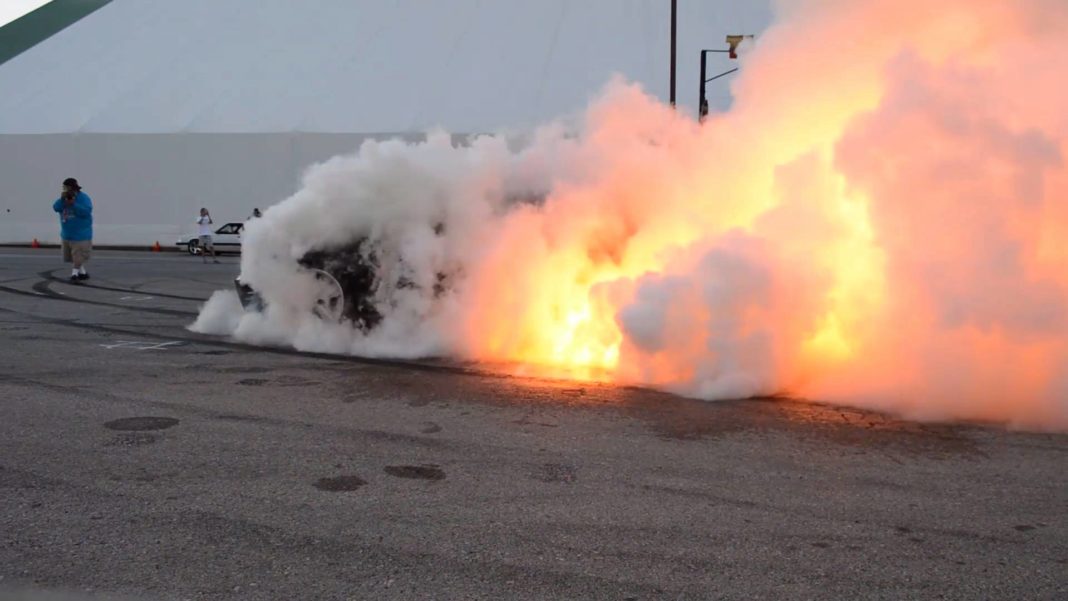 A Ford Mustang in South Dakota caught fire as it was performing a huge burnout, a part of the car got engulfed in a fireball

Recently, hundreds of owners of Ford Mustang muscle cars collected in Strugis, South Dakota for the annual Sturgis Mustang Rally. Here’s a video that performed a massive burnout at the event. The result was something that no one really anticipated.

Actually, while performing the burnout, a part of the car got engulfed in a fireball. Fortunately, the fire fighters were quick to get into action and got the situation under control before things could have gone bad. In fact, the car escaped totally undamaged, which is quite surprising if you look at the size of that fireball. Here is a video clip from Trey Vangenderen, a spectator to the event who posted this video on Youtube.

The Ford Mustang that caught fire was actually a contender of a burnout contest that was held last Thursday. Even after the incident, the car didn’t suffer from any sort of mechanical failure and was seen being driven around even on the later days of the event. The 2010 model Ford Mustang had an aftermarket line-lock setup, which means the rear brakes, which often get too hot while performing such burnouts, weren’t a culprit.

In all probability, the burnout caused the tires to get so hot that they ended up igniting some petrol fumes near the tank. Or maybe, just maybe, the tires reached their combustion point and caught fire. Fortunately, the firefighters swung into action within seconds of the eruption of fire and had things under control in no time.

Now that nobody was hurt and the car was totally unharmed by the fire incident, it can be said that this is easily one of the hottest (pun intended, totally) burnouts we’ve ever seen. It’s also a good example of how easily things can go wrong while indulging in such stunts. We would definitely think twice before deciding to get into some rubber-shredding action.