2019 Ford Endeavour facelift’s production has begun in India ahead of its market entry; will boast exterior revisions and likely a new diesel engine

Ford revealed the facelifted version of Endeavour back in May 2018 for global markets before it went on sale in Thailand the following month. The American auto major is expected to launch the updated Endeavour in India in the early parts of this year and production has commenced right ahead as per our sources.

The 2019 Endeavour is expected to arrive sooner rather than later considering the entry of a new rival in Mahindra Alturas G4 that is basically a rebadged version of the globally well-received SsangYong G4 Rexton. Ford posted 12 per cent YoY sales growth last year and the Endeavour managed to maintain its consistency with a negligible drop in volume of 1 per cent.

With a total of 6,244 units, the Endeavour averaged 520 units monthly and will be hoping to garner more sales in 2019 following the arrival of the facelift. The exterior changes in the 2019 model include a bigger front grille with triple slats, revised fog lamp assembly and reworked headlamps.

Stepping inside the cabin, the facelifted Endeavour gets latest SYNC infotainment system with Apple CarPlay and Android Auto connectivity, engine start/stop button and a host of other subtle updates. Ford has introduced a new 2.0-litre EcoBlue diesel powertrain in the international markets and it could be included here as well.

It has the potential to replace the 2.2-litre and 3.2-litre diesel units. Offering two levels of tune, the lower variants should be sold with 182 PS and 420 Nm outputs while the twin-turbocharged version is capable of developing 215 PS and 500 Nm and is more powerful and torquier than the existing 3.2-litre version. The twin-turbo motor is connected to a new ten-speed automatic transmission. 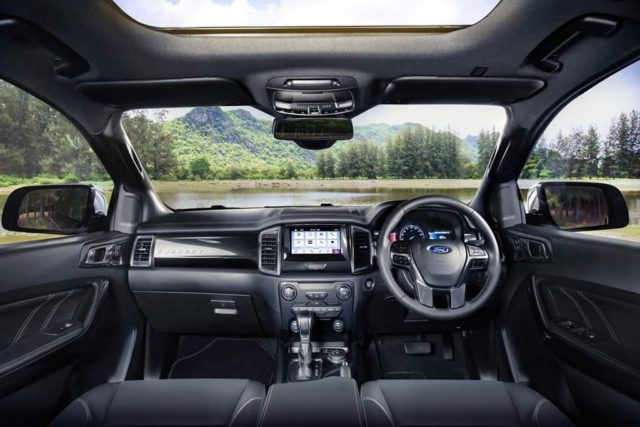 We do not expect Ford to bring in the Autonomous Emergency Braking, pedestrian detection and vehicle detection technologies in the India-bound model. Some of the important safety features to be present are ABS with EBD, Electronic Stability Program, Traction Control, Hill Start Assist and much more. The 2019 Ford Endeavour could be priced between Rs. 27 lakh and Rs. 33 lakh (ex-showroom).