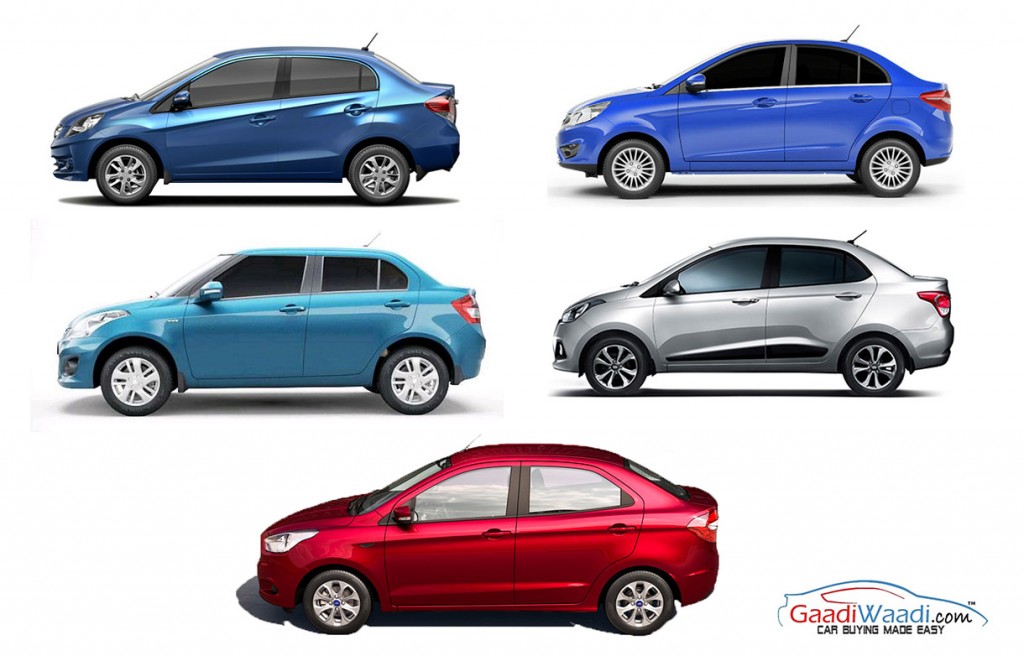 Ford Aspire vs Xcent Vs Zest Vs Amaze Vs Dzire – These are the compact sedans in question today, post Ford Aspire launch

Compact sedan market is getting bigger and bigger every single year. It all started with the Maruti Dzire and as of now, it ends with the Ford Aspire launch. Next launch is from Chevrolet, which is almost 1.5 years away. Ford has created a huge rave with its sensible pricing and it is extreme value for money as always like any other Ford product seen in the past. Ford is pretty much replicating Maruti, the market leader in terms of pricing and could and should taste that success once it reaches the number of dealership that the Indian manufacturer has one day.

Hyundai may be the second in position, but it charges a premium, which is justified but still, you have to give a round of applause to Ford for what they have achieved. Tata and Honda on the other hand are fighting for market share and now are in similar categories fighting each other as well. Today, we give a run on numbers and other key facts to making decision simpler for your purchase.

Ford Aspire vs Xcent Vs Zest Vs Amaze Vs Dzire – When it comes to design the Ford Aspire nails with its Aston Martin grill and stubby, but proportionate looks. Honda Amaze comes next when it comes to proportions and then comes the slightly funky and typical Korean Xcent. Zest with its humanity lines and tall stance also grabs attention due to mature and modern design language. Dzire falls last as its design is clearly lost from where it starts and where it ends. Ford wins this round, but the rest except Maruti are right behind it in their own style.

Ford Aspire vs Xcent Vs Zest Vs Amaze Vs Dzire Interiors – Yet again Ford nails it with interior design, right use of colors and sufficient space at the back. Hyundai looks the most premium, but lacks width and has similar space. Zest and Amaze are the most spacious of the lot and Maruti Dzire yet again falls last in that regard.

All these cars have good quality all around with excellent fit-finish to boast about. Aspire has the most goodies when it comes to safety and features while Xcent come second. Zest is along the Xcent, but Dzire and Amaze come last in that order. Amaze has the biggest boot of the lot while Hyundai, Aspire and Zest follow. Meanwhile yet again Dzire comes last.

Ford Aspire vs Xcent Vs Zest Vs Amaze Vs Dzire Performance – Ford again strikes back hard at its competition when it comes all its power trains. While petrol engine is similar to other petrol fueled cars in the segment, Ford comes back at diesel and offers 100 PS of power! That is 10 BHP more than Zest, 25 BHP more than Dzire 28 BHP more than the Xcent and similar to the Amaze.

Torque is where Aspire shine as it has 215 Nm of torque, which is the highest in segment by 15 Nm over the highest of the Amaze, which has 200 Nm. Fuel efficiency in diesel for the Aspire is similar to the Amaze at 25.8 km/l. Maruti being Maruti, it has the highest in the segment at 26.59 km/l. Xcent come second to last at 24.4 km/l. Zest and isn’t far away with 23 km/l.

Ford Aspire vs Xcent Vs Zest Vs Amaze Vs Dzire Verdict – And the winner on paper is the Ford Aspire. It offers more performance, more safety, more features, more value and more smiles as it set to benchmark when it comes to dynamic part. Wait for the road test that will happen soon. So crucial question is who comes second? Well we think Zest has it what it takes, but Hyundai is just a notch ahead with its features and mildly better feeling cabin.

Basically, it is a tie. Coming to last two contenders. Amaze is a great car, but it isn’t exactly Honda because it lacks of refinement, value, features, but scores high on space and some what in design. However, the Dzire does not come last as it offers dynamics, subtle amount of features and offers value and efficiency with peace of mind as it is cheap to run and buy despite it lacks space and performance.