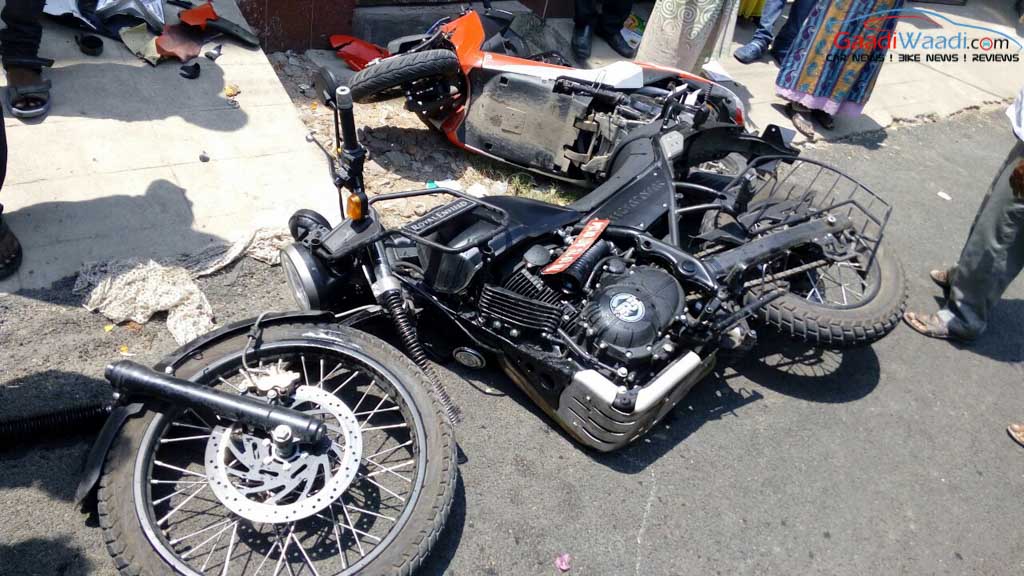 In Chennai, recently launched Royal Enfield Himalayan on test ride collided with a Honda Dio, another one took dip into water

Royal Enfield is on cloud nine with their latest offering Himalayan, which is the first purpose built bike of India. After the launch a few days ago, the off-roading bike is in headline again, but this time for wrong reason. In Chennai, a granite coloured Royal Enfield Himalayan on its test ride collided with a Honda Dio, and as the picture suggests, the scooter faced serious damage, while the Himalayan also took some hit.

The scooter is almost tattered, while the front wheel of the Himalayan is completely broken apart. As we came to know, the scooter was coming at a speed of 70+ kmph, while its rider could keep control and hit the RE Himalayan from front. The 17 year old scooter rider was not even carrying his license as well. It’s really sad to see such a tough built bike like Himalayan had to face an accident like this. Wait; there is another mishap Himalayan faced. A Himalayan took a dip into the water! Yes, as the image suggests a Himalayan is being dragged out from water, which might be a roadside water body. Although we know the reason of the first mishap, but in the second place the reason of the Himalayan’s taking dip into water is rider’s fault.

The 15 litre fuel tank offers thigh grips to the rider for a better and comfortable riding position. The bike gets underbelly skid plates, and it comes with 220 mm of ground clearance, which is better than some compact SUV as well. The bike is powered by a 411 cc air cooled single cylinder engine mated to a 5 speed constant mesh transmission churning out 24.5 bhp peak power and 32 Nm peak torque. Royal Enfield claims the Himalayan can run up to 10000 kilometers without any oil change. Sold in two different colours Snow and Granite Royal Enfield is priced at Rs. 173676 (on road, Delhi).