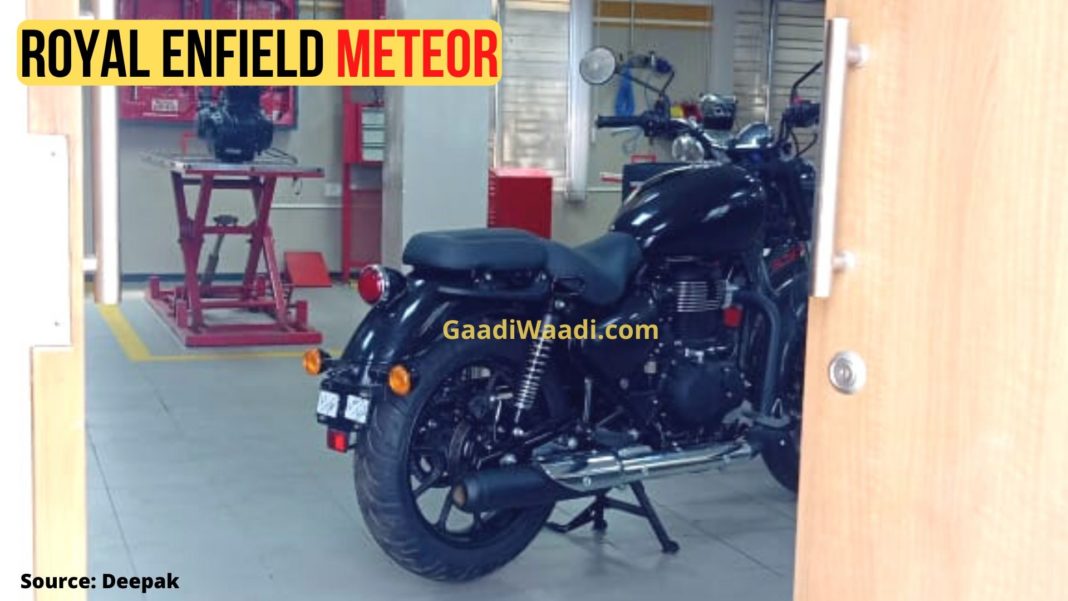 The upcoming Royal Enfield Meteor has been spied sans camouflage for the first time ever. The new motorcycle will likely replace the Thunderbird range in the company’s portfolio. The spy pic clearly reveals that the new model will look fresher than the T’bird but would have the same cruiser essence as the outgoing motorcycle.

Internally codenamed J1C0, the new Royal Enfield Meteor will not only feature a BSVI-compliant motor but it will be even based on the company’s J-series modular architecture. The same platform will give birth to the next generation models of the Bullet and the Classic. In all likelihood, the new versions of the popular models will rekindle the sales performance of both the vehicles.

Visually, the Royal Enfield Meteor retains the classic appeal of the Thunderbird but ends up looking more aggressive due to bits like a chunky rear tyre, sporty alloy wheels, a more curvaceous tank and newly designed tail lamp and single-pod instrument cluster. There are good chances that the new motorcycle would offer better ergonomics than the motorcycle it’s about to replace. The Meteor will become the first Royal Enfield motorcycle to carry the company’s BSVI-compliant engine. While an official confirmation is yet to arrive, the new motor could have an engine capacity of somewhere between 346 cc and 499 cc. Other than being cleaner than the current motors, the new engine will also offer higher refinement levels. It’s expected that even the reliability would be a notch higher.

The new engine for the Meteor could have been based on the 650cc parallel-twin motor for the Interceptor 650 and Continental GT 650. The new motor will benefit from an overhand cam. Also, it will sport fuel injection. The new powerplant will be a replacement for the current engines as they won’t be eligible for retail beyond March 31, 2020. While the exact launch date of the Royal Enfield Meteor can’t be confirmed at the moment, the iconic motorcycle manufacturer could be pretty close to introducing its all-new motorcycle. Prices will likely start around Rs 1.80 lakh (ex-showroom).