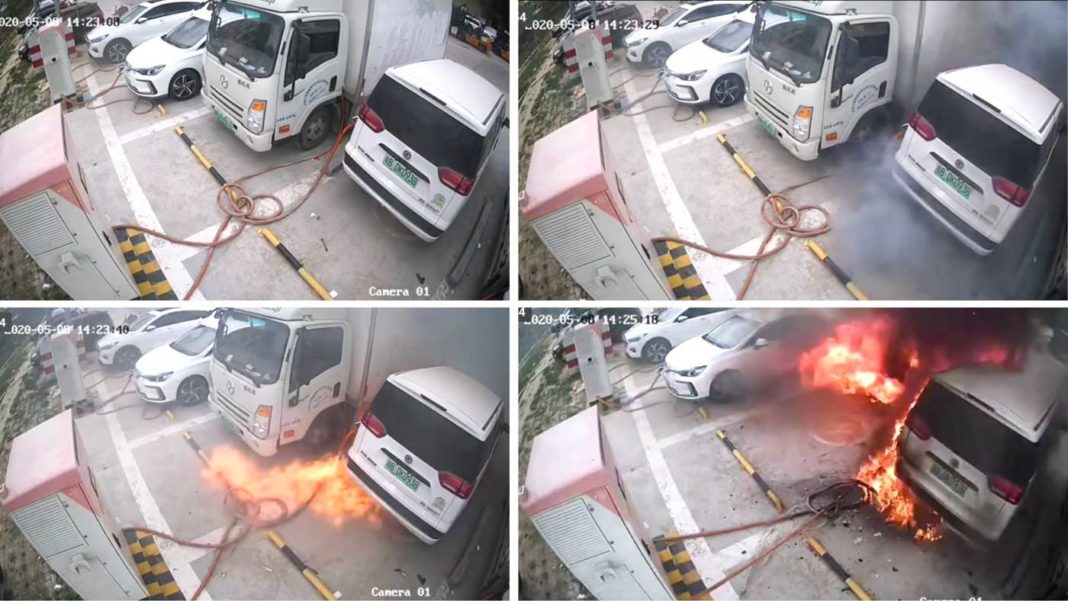 A video of multiple car explosion on a charging station in China has gone viral lately. The incident took place on May 8 and was recorded in Dongguan. An electric car suddenly caught fire when plugged into a charger that appears to be a DC fast charger. While the cause of the incident in not known yet, it all started with a sound and puff of black smoke poured out.

The action repeated and more an explosion and it could the car or its battery. When the fire spread rapidly, the nearby vehicles could not survive either. The blaze was brought under control by as many as 40 firefighters and 8 fire trucks were deployed. Courtesy of their quick response, the fire was put out without any casualties or more property damage.

It has been reported that five electric vehicles were affected. The black smoke emerged from underneath a parked passenger van that was charging along with other vehicles. Within a short period following the fire breakout, a medium-sized commercial vehicle got in the act and the flames quickly engulfed other cars that were getting charged on the same charging point.

The major cause of the incident could be with faulty charging points and the fire caused the local authorities to close 48 charging stations out of the 700 total, as a precautionary measure. There could be multiple reasons for the massive fire as non-compliance of safety standards and charging pile power exceeding transformer capacity were cited to be possible instigators.

It has also been said that Dongguan was instructing the people responsible for the charging stations to comply with construction rules but they had failed to do so. This alarming incident acts as the reminder of the possibility of fire breakout in charging stations and we do hope adequate safety measures are taken to resolve such issues as it could have been worse if casualties were involved.

With electric mobility solutions being the future of transportation, taking adequate measures and strict protocols are highly essential.