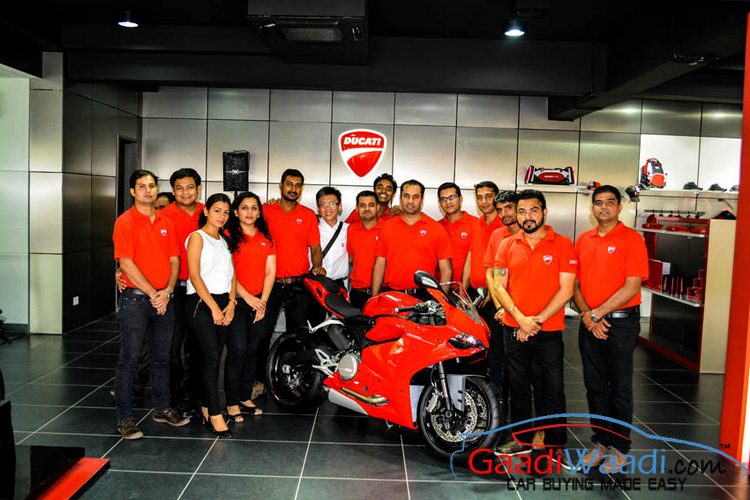 After being here and there Ducati is officially in India now. Ducati India is now a wholly owned subsidiary of Ducati Motor Holding S.p.A. The Italian manufacturer made the official announcement after pricing and the motorcycle which are set to be launched were already announced couple of months back. Ducati India is now present in Gurgaon and Mumbai and plans to open 10 more dealerships across the country. The cities include Pune, Bangalore, Chennai, Kolkatta, Hyderabad, Cochin, Jaipur and Goa. The entire model lineup is here available for sale at really good price tags. Ducati’s Delhi showroom where the launch took place today is claimed to be largest showroom ever made in the world.

Ya, you must think Panigale is no where near value as it cost a whopping Rs. 50 lakhs on-road in some expensive cities and not to forget the Panigale 1299 R version will set Bangalore almost a crore. Finicky, very much indeed. However, that’s because its a CBU motorcycle. What does that mean? The bike is taken of the iconic assembly line and packed like exotic Italian lunch and delivered to you hot and fresh. A machine which runs neck and neck with competition and carved its own niche thanks to the V-Twin engine arrangement. Back to the lineup. Ducati has thrown kitchen sink this time and is bringing limited and special editions as well. Case for example. The surprise entry of three Scrambler variants which start at a jaw dropping 6.77 lakhs ex-showroom delhi. More bikes include the Power Cruiser (Sorry Ducati) Diavel, The tourer Hyperstrada and the crazy urban machine which is the Hypermotard. Adventure junkies have the world famous Multistrada for them which go both on and off the road for endless miles. The Mutlistrada will be made available in October 2015. Panigale 899 is one of the sweetest deals in Ducati’s line up today. However, what we have our eyes is the iconic Monster series. Starting from the 795, 821 and all the way Monster 1200. A bike which can do it all. Commuting, touring, weekend rides, track day sensations. Obviously Ducati has competition to fight as most of its rival have come in the country a few years back and have quite a strong hold in the country. Since everybody calls them niche because they are because brand following in India is massive Ducati will be going against Kawasaki, Triumph, DSK-Benelli. Yamaha, Honda and Suzuki are also bringing things into India slowly and upgrading their machines as well. It is not far away that proper battle awaits in the top-end of superbike segment here in India.