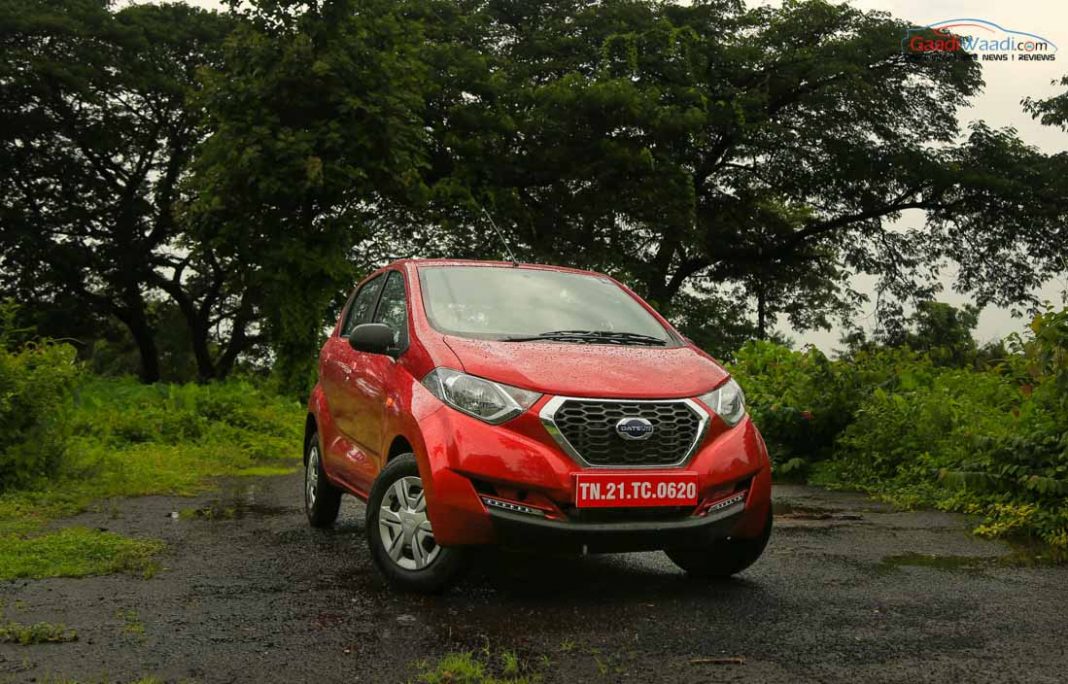 The RediGo was launched in India last year as the first Urban Cross with catchy design, segment best ground clearance and spacious cabin but only with an 800 cc engine which generates 54 PS. The tiny engine delivers an impressive 22+ KMPL of fuel economy and the Japanese company priced the car very aggressively right from just Rs. 2.39 Lakh. Soon after its launch, this entry level model became the brand’s bestselling car in the country.

However, the notorious Kwid and Maruti Alto have an edge over RediGO – not just in term of sales but in engine option as well – as both the cars have 1.0L engine along with AMT option that definitely bring some good numbers for them. Knowing what they need to do, without wasting much time and fancying more market share, Datsun India is going to launch the 1.0L MT variant of the RediGO on 26th July before the arrival of an AMT version in a little while later. 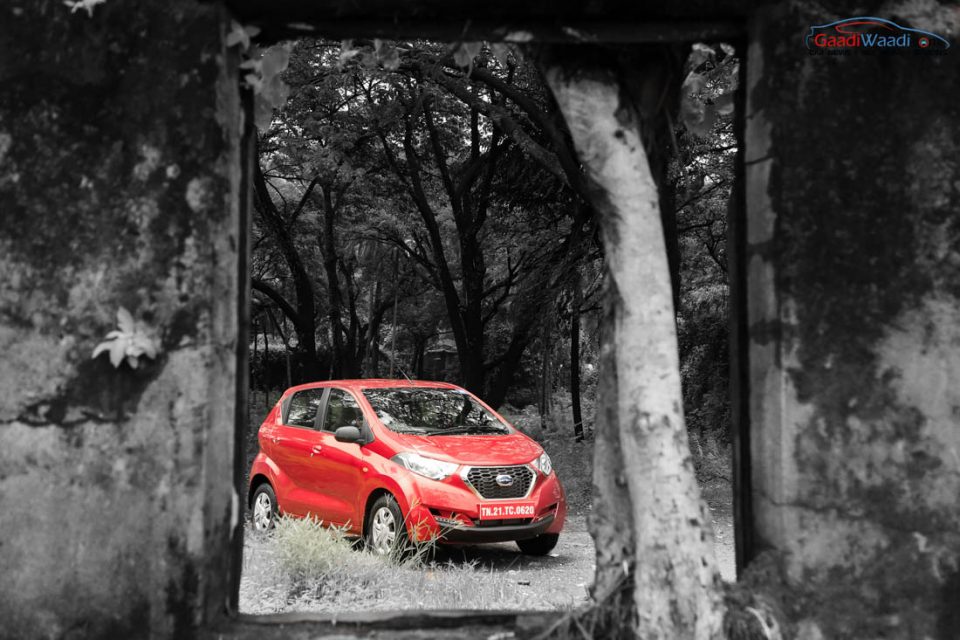 To find the ‘Go’ power of the RediGO 1.0L MT, we test drove the car last week at the beautiful monsoon-clad Goa. Here is our first drive review: 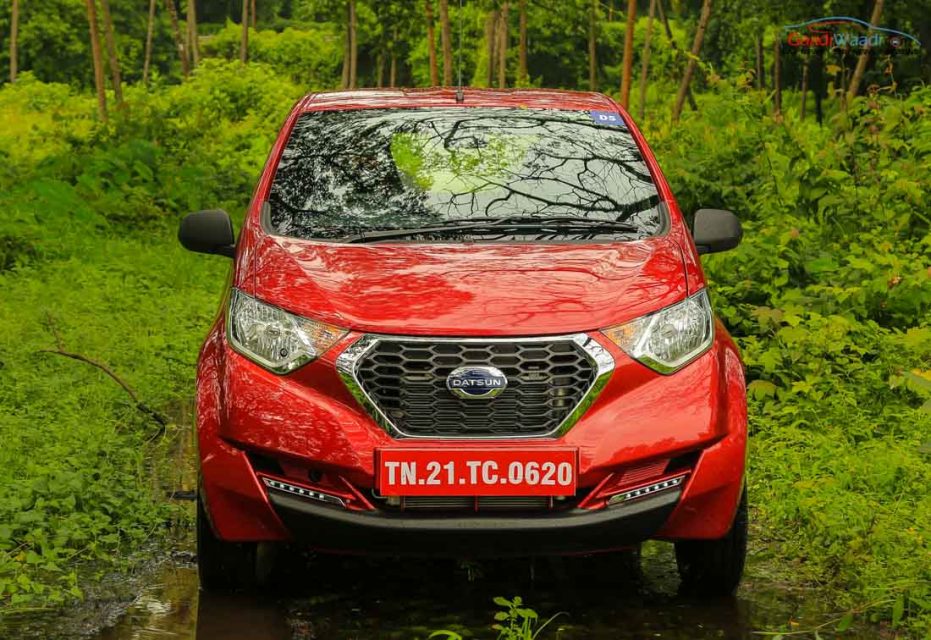 As all the emphasis has been put on the engine, the 1.0L variant is very identical to its 800 cc sibling visually. It offers catchy looks up front with the prominent black meshed hexagonal chrome grille. In a similar fashion to the grille, the headlamps too get the chrome treatment giving an attractive demeanour to the car.

The plenty of chrome and creases on the bumper give it a certain up segment feel. The lower part of the bumper is painted in silver in the car’s green shade while it is black in rest of the colour options. It definitely brings a budget crossover-ish look and, furthermore, the new RediGO is equipped with DRLs as standard unlike its 800 cc sibling which only has the feature as optional fitment. 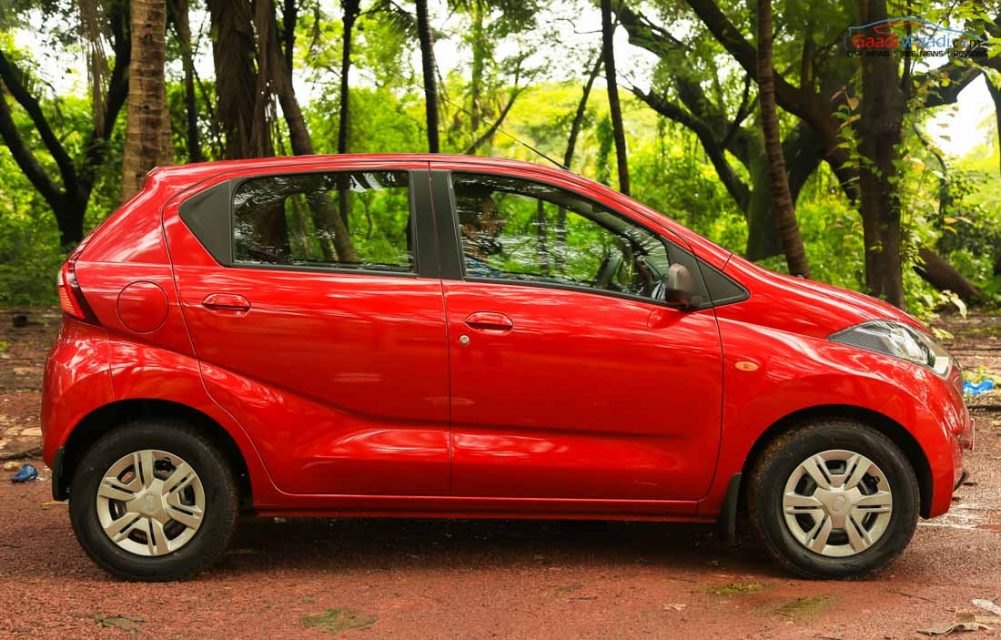 From the Side, the tall stance of the RediGO surely puts up a smile on the tall first-time buyers’ face as it offers easy ingress and egress. The other tallboy car available in India is Wagon-R but is in the slightly higher up the segment and relatively costly. Character lines could be seen running to the length of the car and the flared wheel arches give the RediGO sporty presence we already used to.

At the rear, the only visible difference is the 1.0 badge on the left side of the boot. The RediGO offers a good design package at the posterior too with highly-placed clear lense taillamp unit, big Datsun logo on the boot with chrome strip on its edges. 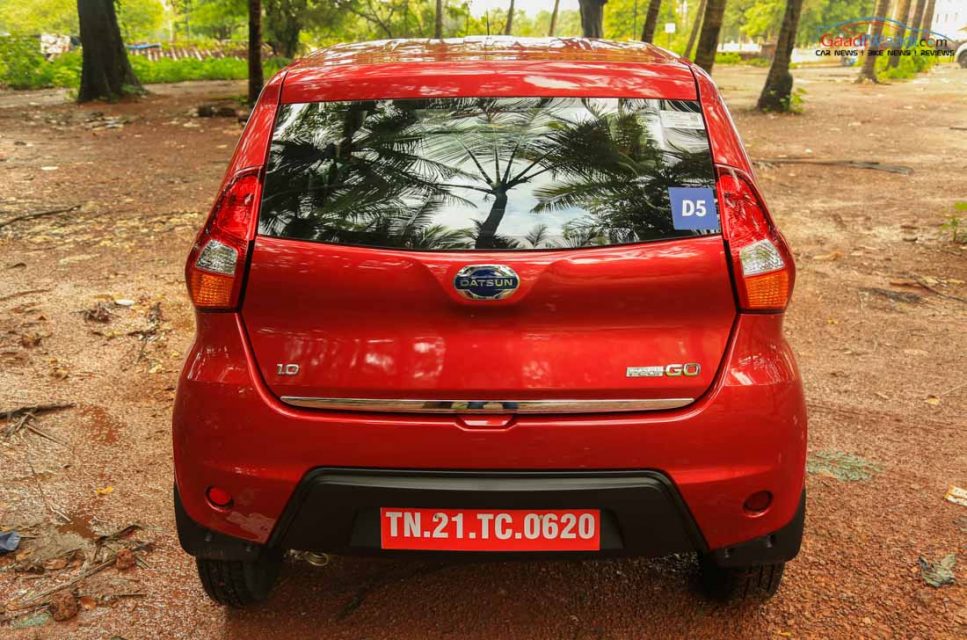 As the front, the rear faux skid plate accentuates company claims of RediGO being an urban crossover. It is done up in black in rest of the car shades except for the green shade finished in silver. Obviously, the RediGO is the tallest model in the segment with 1,541 mm of height resulting in good ground clearance of 185 mm. It measures at 3,429 mm in height and has a width of 1,560 mm.

Unlike the 800 cc version’s dual-tone grey and beige colour scheme, the 1.0L gets all-black sporty looking interior. However, the dashboard design remains just the same and the centre AC vents still can’t be shutdown and is meant for rear passengers. The speedo unit is still the same analogue system as opposed to the the digital readout in the Kwid. But, the blue outline does bring a bit of sportiness. 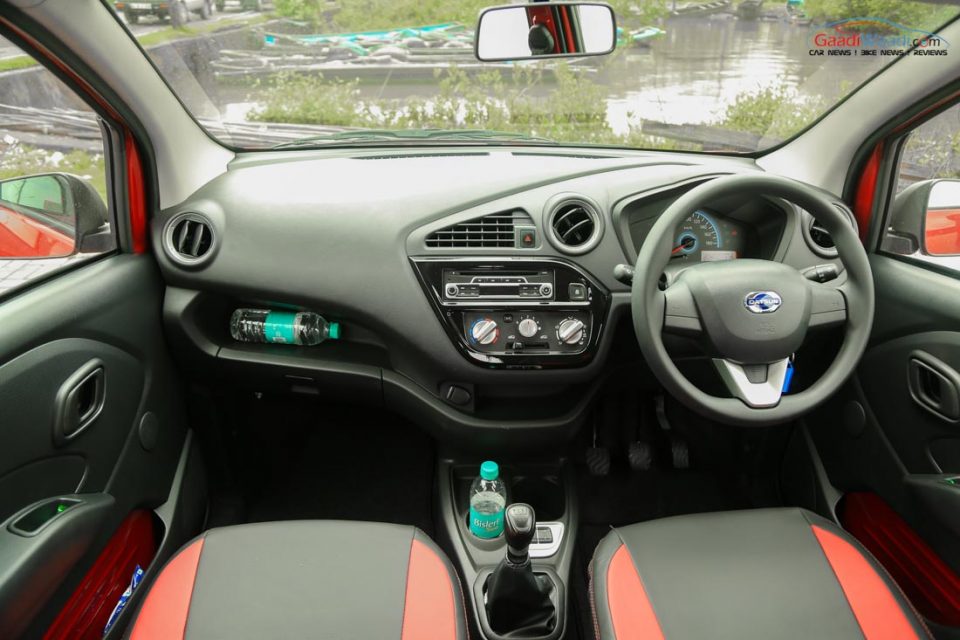 Another change made to the car is the addition of central locking button on center console which was missing on the 800 cc variant. The 1.0L variant still misses on the Touchscreen music system though even as an option and you can’t fit the aftermarket one as there is no 2-din space available in the car’s center console. Having keyless entry is a good touch though on the features front. 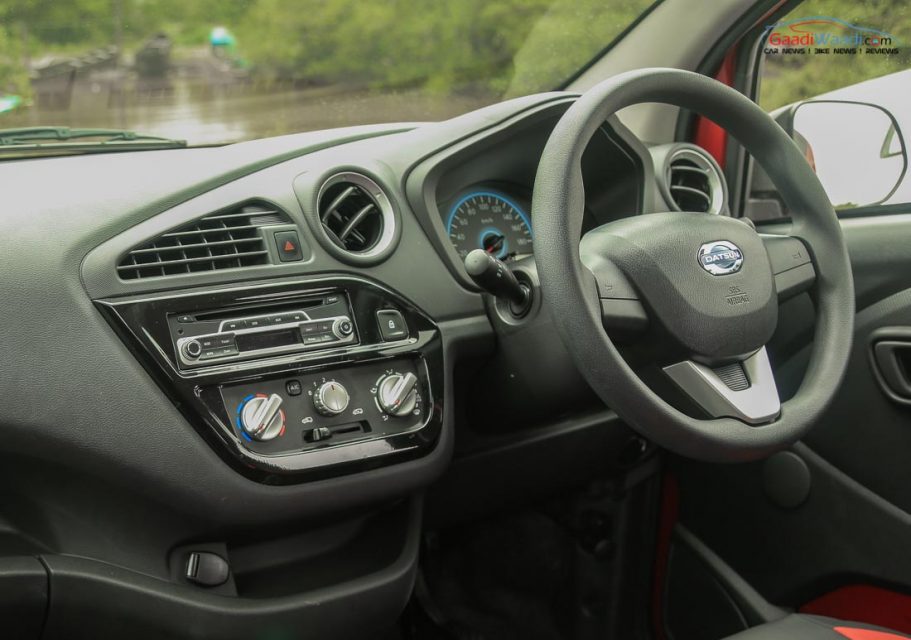 It carries the same single-din audio system with radio, CD player and USB/AUX connectivity. Along with that, the cost cutting goes by a long way as the RediGo 1.0L still doesn’t have the provision to open boot from outside while lot of exposed sheet metal in the cabin and useless door pockets can disappoint buyers. Overall, the minor changes in interior adds some positivity to the RediGo 1.0L over the 800 cc variant but it still needs some major rework to make it more practical. 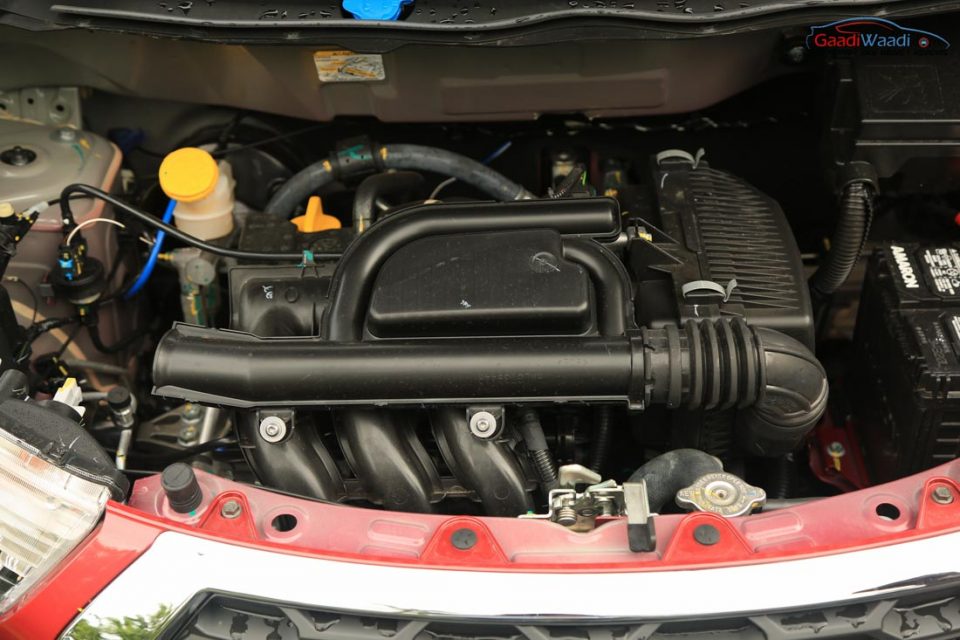 So, except the minor changes to the interior and exterior, the only thing that makes big difference is the heart of this car compared to the 800 cc model. This 1.0L I-SAT is same engine that can be found in Kwid 1.0L. The Power and torque figures now stand at 68 PS and 91 Nm – 14 PS and 19 Nm more than the 800 cc variant.

Seems minor ? Well these minor increments in power and torque delivery add the confidence while overtaking and makes the drive little smoother especially on highway drive. In city too, like the 0.8L version, it won’t required frequent gear shifting and can be climbed up in second gear smoothly but it needs some momentum for that. 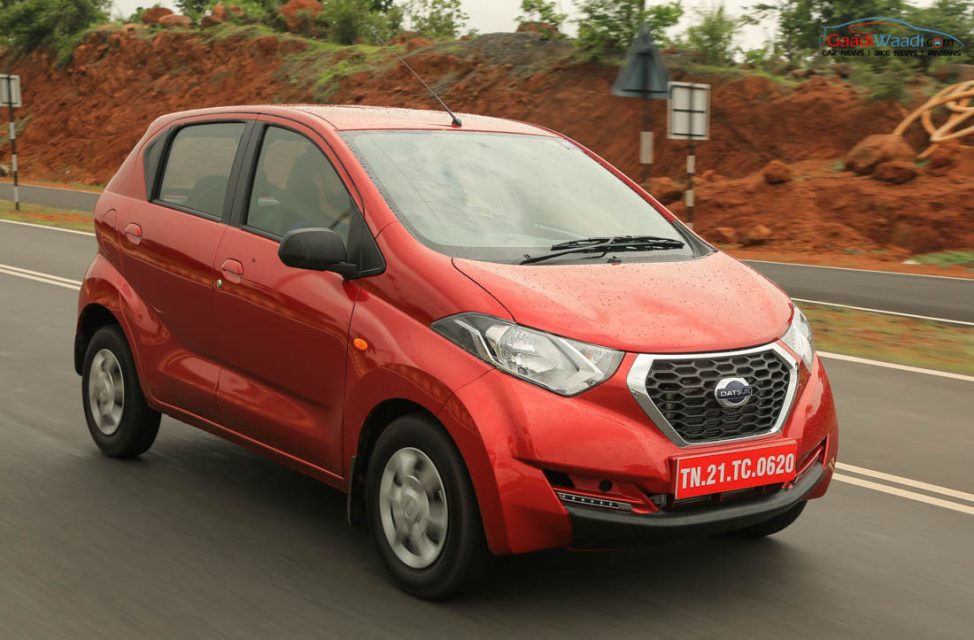 Only post 2,500 rpm, the motor came into life, however, reversing the car still needed some efforts but not as much as the 0.8L version. In the city driving itself, you can find that the sound insulation could have been better while on highway and if you are driving the car above 60-70 kmph, you will be more annoyed of tyre noise instead of the engine noise. 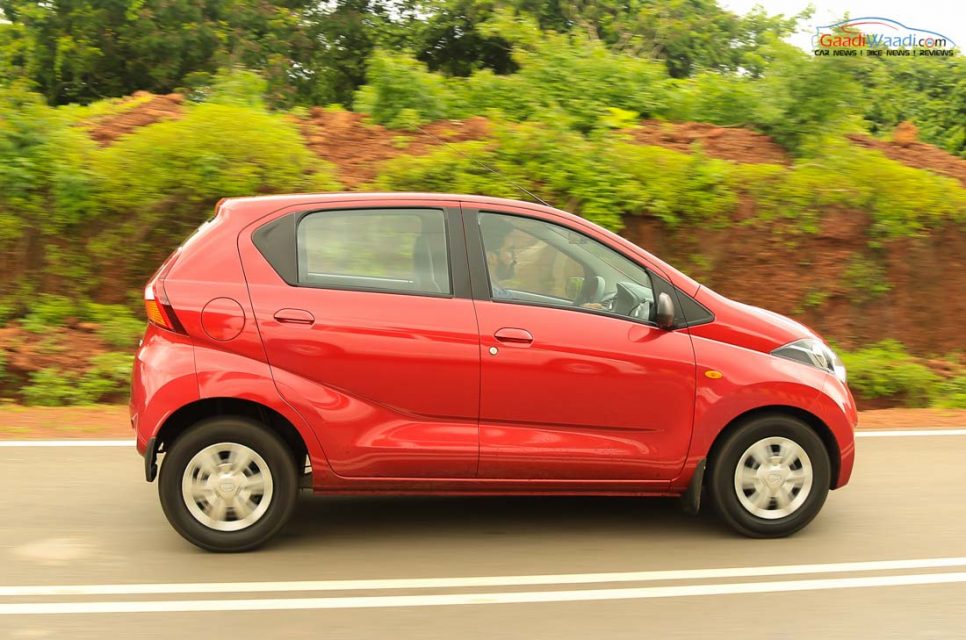 In terms of fuel efficiency at 22.5 kmpl, the figures are at par with Kwid. However, the Maruti Alto K10 is still the segment best with 24.07 kmpl. Datsun has also made improvements to the sound insulation, thereby lowering the NVH (Noise, Vibration & Harshness) levels. Anyone who has driven the 800 cc version will be able to identify this improvement but the motor still cannot be termed as smooth. 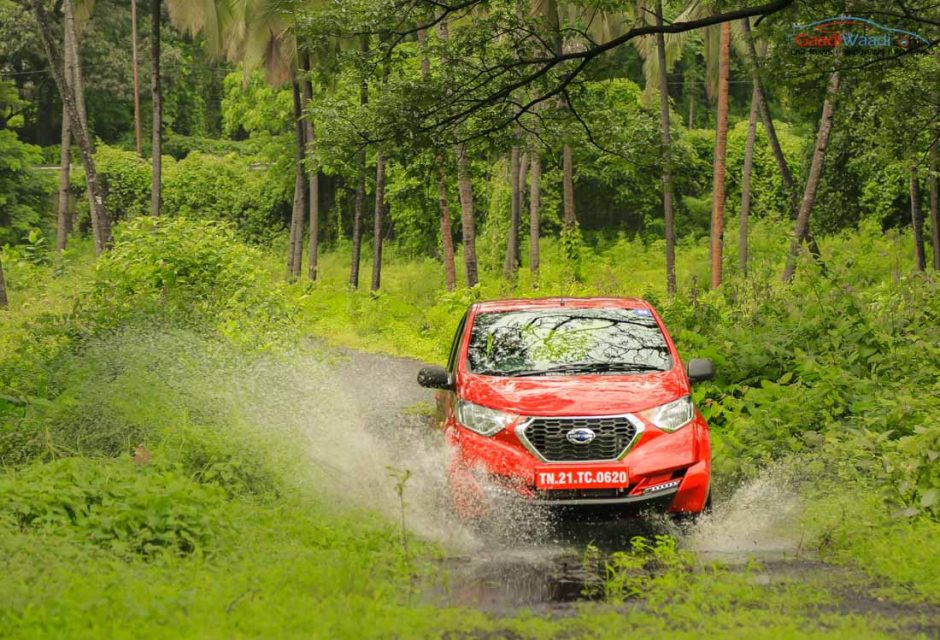 Thanks to its tall boy design which is the USP of this car in the segment against the well established Alto K10 and Kwid, RediGO makes easy in and out. While on the inside, it is a very comfortable car but for four persons only. The seats offer good comfort especially the well laid back support. Required leg room is available with segment best headroom and good shoulder room for four, but the open shelf above glove box cuts the leg room of the co-driver by a big margin.

As the Kwid, RediGo too sits on CMF-A Platform and no big modification was made to the car, suspension setup has McPherson struts at front and beam with coil springs setup at rear and it does a good very good job amidst the noticeable juggle on deep potholes. 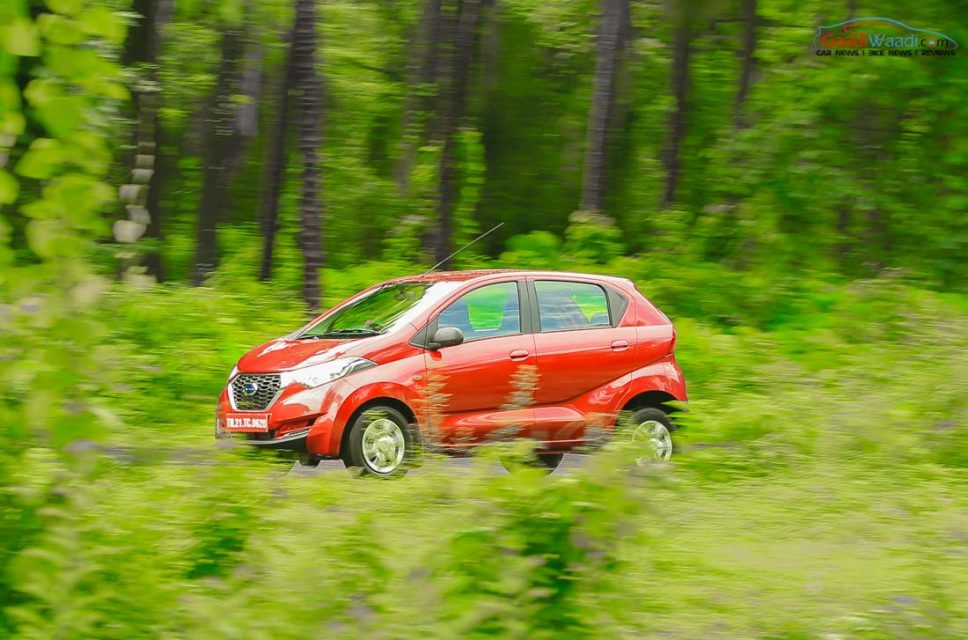 While on the steering part, you might like the unit in city as it remains very light and has not gained the adaptiveness on highway. While cornering, one can feel the difference the added weight made comparing to 0.8L as it offers better stability. Datsun brings good numbers in term of sale from rural area for RediGO .8L and its 186 mm ground clearance could be the reason for the same. 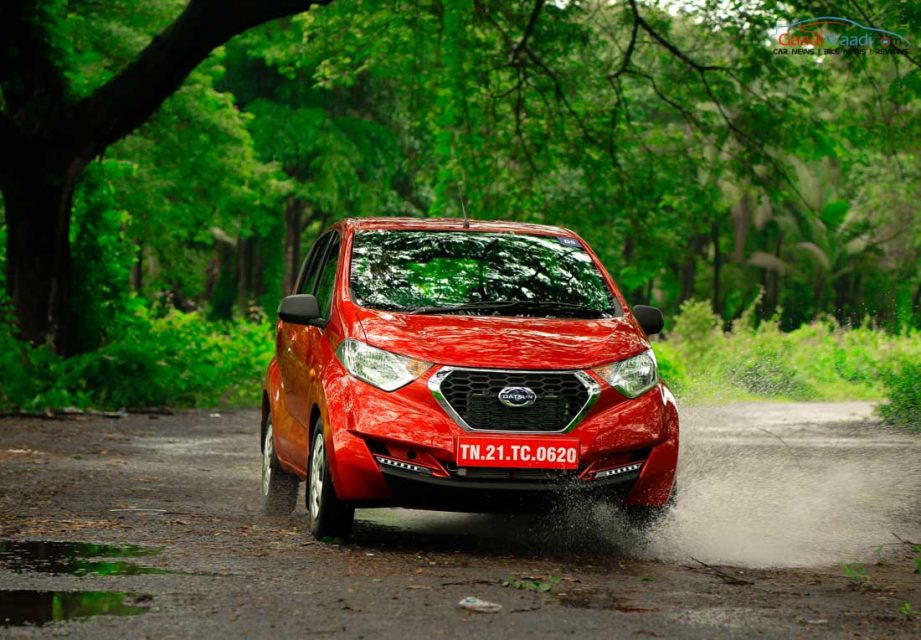 Being a tall boy and has high ground clearance, one can find the fair amount of body roll around corners but you won’t be scared of it for sure. However, braking at high speed required more force and you can feel when the brake caliper is trying to stop the car. So Overall, the RediGO 1.0L’s added weight has improved the handling and stability of the car but the steering adaptiveness and braking confidence could have been better. 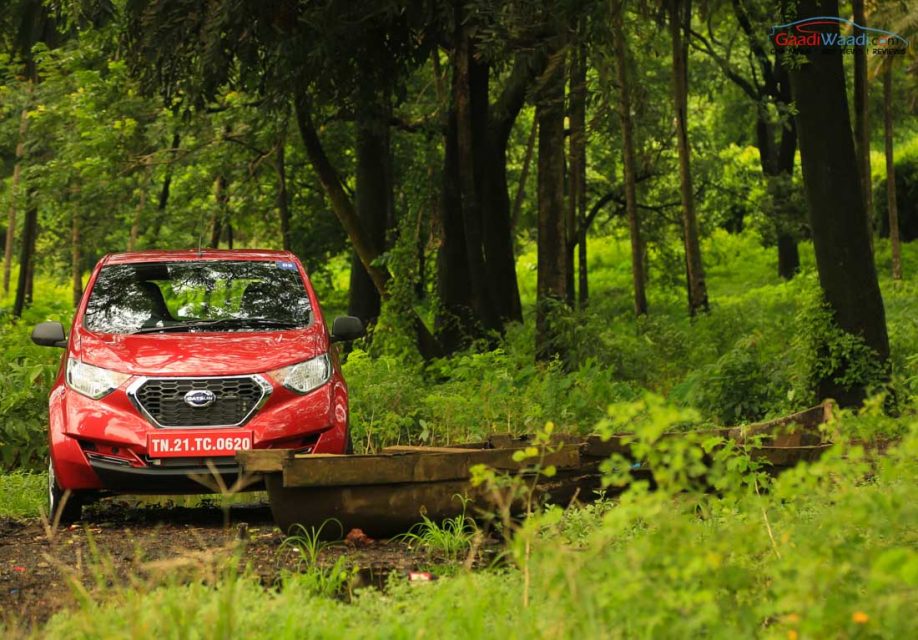 The Datsun RediGo 1.0L has a big edge over the 0.8L variant, as it offers more power, improved handling and an all black interior. The biggest advantage is not only the power and torque figure over the 0.8L but it can be driven for long drive with ease as this engine helps RediGo to offer better drivability. 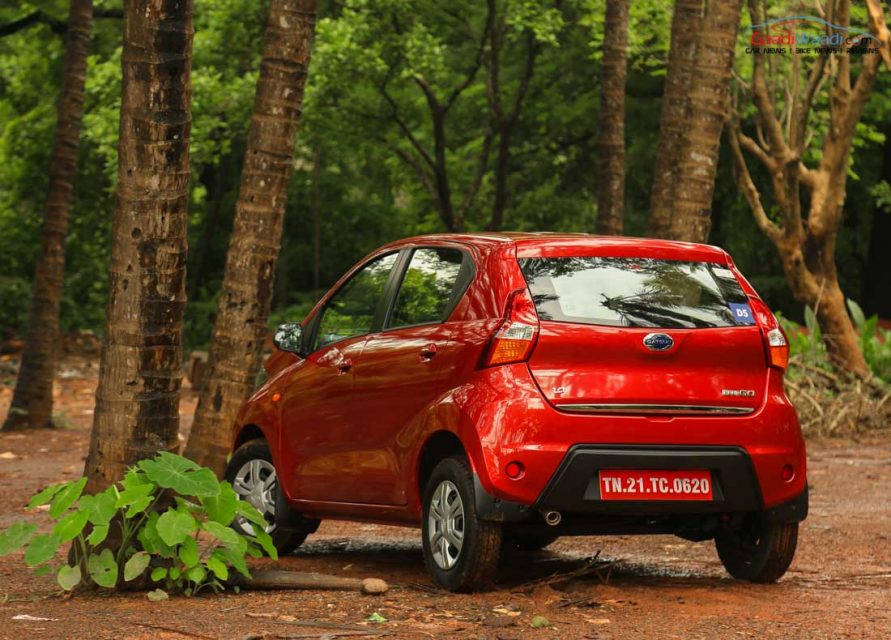 Also, it is expected to undercut its rival in pricing when the car will be launched on 26th of this month as like its elder sibling. Moreover, to ensure peace of mind to customers, Datsun introduces Datsun Care upto 5 years/unlimited km scheme for Rs. 33,399. This means, the 1,000 cc version of the RediGO will be a lot easier to live with in an affordable package.