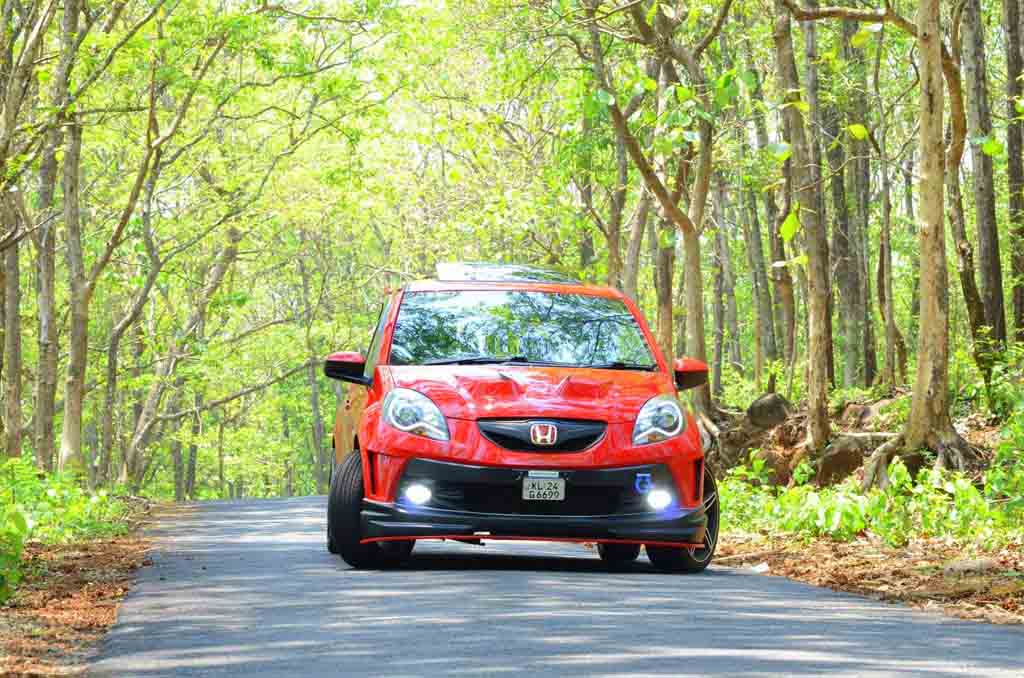 Honda Brio is an unique compact hatchback in Indian market. It’s compact, practical and cost effective as well. But the car is no way meant for racetrack. Honda has launched the RS version of the Brio in Indonesia earlier this year. Meanwhile 360 Motoring in India has done a nice job to give the Brio an all new dimension.

The Kozhikode based customization studio has modified the Honda Brio to give it a pure race spec look. The specially modified Brio has been named as Red Lantern. The car gets customization both at exterior and inside the cabin. Take the front fascia first. The headlamps are new and come with integrated LED daytime running lights. The grille remains same, but the front lip and the scoop is all new. The hood has been redesigned with dual air vents on it. The rear bumper also gets dual vertically positioned faux air vent. The taillights have been customized to reflect style and sportiness. A roof spoiler has been fitted atop the rear fascia, while the bottom gets a diffuser like black part dual round exhausts. If the exterior was not enough to impress you, the interior will surely do. Inside the cabin it looks more performance oriented. The gauge meters have been positioned atop the dashboard up front. They get a blue, red and green backlit, which simply enhances the appeal of the interior. Also the car has been given a Webasto sunroof, which gives it a bit of premium touch.

Mechanically, there is no change. It draws power from 1.2 litre SOHC petrol engine. To make the car a bit of truly performance oriented, the springs have been lowered, which has lowered the ground clearance. The Honda Brio is available in both manual and automatic transmission options. The car churns out 87 bhp of peak power at 6000 rpm and 109 Nm of peak torque at 4500 rpm.