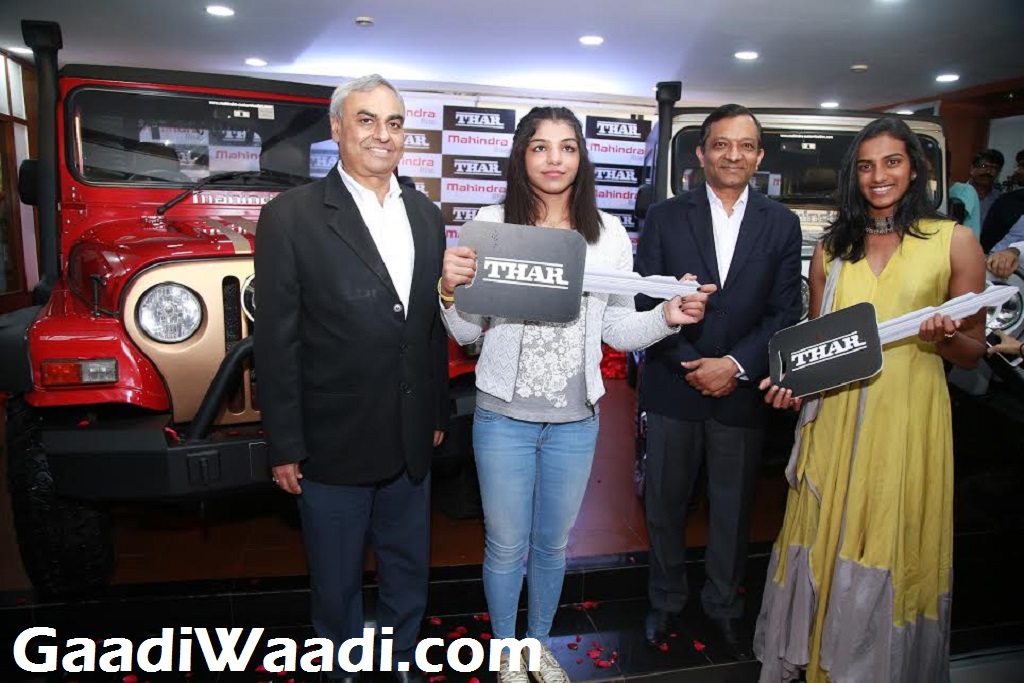 Mahindra & Mahindra Ltd. honoured the Rio Olympic starlets, the silver medalist shuttler P V Sindhu and bronze medalist wrestler Sakshi Malik by awarding them Thar 4X4 off-roader each. The ace Badminton player PV Sindhu and wrestler Sakshi Malik were felicitated for their respective performances at the recently concluded Rio Olympics 2016 where they were the only two medalists from India.

Dr. Pawan Goenka, Executive Director, M&M, gifted the keys of the Mahindra Thar to the two gutsy sports personalities at a ceremony held at the largest SUV manufacturer in the country’s production facility in Kandivali, Mumbai. While he took pleasure welcoming the Olympic heroes, Dr. Pawan Goenka said both these women have etched India’s glory in history books. He went on to say, the Thar off-roader was a perfect souvenir for them as it aptly complement their ability to boldly take on competition. Both Sindhu and Sakshi have become inspirations for younger generation not just in sporting terms but generally for whomsoever trying their hardest to be the best at what they do as they fought all odds to come out on top. It “symbolize the go anywhere spirit of the Thar” lauded the Executive Director.

The Indian contingent went into the Rio Olympics 2016 with so much exceptations and hopes as there were several promising contenders to clinch gold. With a billion hearts turning up to watch the competitions unfold and crossing fingers for the athletes to repeat shooter Abhinav Bindra’s golden triumph eight years ago, the finest women competitors the country has on offer proved their indomitable brilliance in the biggest stage of them all.

Just like Karnam Malleswari, who took the lonely bronze for India in the 2000 Sydney Olympics in the 69 kg weightlifting category, Sakshi Malik mended the sinking hopes by standing on the bottom step of the podium in 58 kg Freestyle Wrestling division while PV Sindhu nearly shook the world by coming close to beating Carolina Marin in the finals.