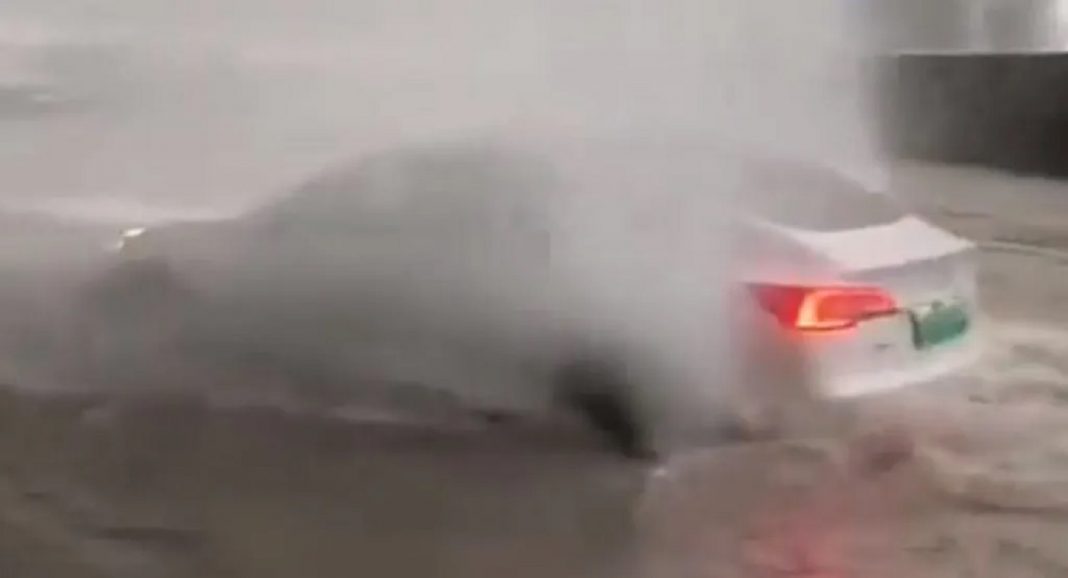 Electricity and water are not friends, but these videos of Tesla Model 3 examples making their way through flooded streets say something else

No doubt, Tesla is one of the biggest names in the world of electric vehicles. The EV maker currently has a respectable market share in countries like the USA and China. However, Chinese buyers hardly respect their possessions. We say so as clips emerging from Chinese media outlets show Tesla Model 3 owners relentlessly wading flooded roads with their electric sedans.

From all, one video was recorded by the passenger itself from the inside of the EV, while the Model 3 made its way through deep water. In fact, the water can be seen splashing over the front windscreen. In a different video, another Tesla Model 3 is seen making its way through a flooded underpass. Similarly, the same incident is repeated in all the videos.

In our books, driving a car through deep waters is not advisable for numerous reasons. At times, it is tough to judge the water level, and the result could be fatal as well. Moreover, the water damage itself can be life-taking. Hence, replicating the acts visible in these videos is clearly dumb, while we do acknowledge the fact that the Model 3 can survive a water level of up to 1.5 feet deep.

You’ve probably watched this clip from China already but many of you may not know driver & passengers were saved thanks to the wading capability of Model 3, which was coming out of a completely flooded tunnel where there were still some vehicles trapped inside. pic.twitter.com/1xMMIjJ21q

Tesla’s important man – Elon Musk, has earlier claimed that the Model S can float for a short duration of time. However, one can never calculate the exact duration for which it will float. Nevertheless, this confirms that Tesla cars are not prone to water damage. Even Tesla’s manufacturing unit in Shanghai has a dedicated water wading test apparatus to ensure that Tesla’s do not succumb to water damage.

Well, Tesla is preparing for the launch of the Model 3 in the Indian market. The brand has announced its team for the India operations, and the test mules of the Model 3 are already on Indian roads.

It is expected that the electric carmaker might introduce the mid-size electric sedan in a single variant only. Internationally, it is sold with two battery sizes and two driving layout choices. The fastest configuration of all can make the Model 3 do a 0-100 kmph run in a shade over 3 seconds. Prices in India would likely start from Rs 60 lakh, ex-showroom.