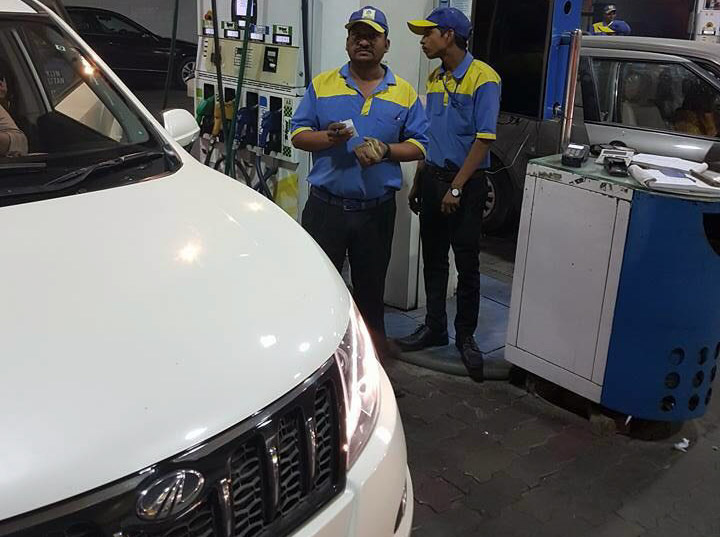 The petroleum companies want the filling customers to have trust on them. Resultantly, they offer filtration tests, issue feedback forms and so on. But one cannot help but think that sometimes when you do get varying levels of mileage, be it four-wheelers or two-wheelers, for same quantity of fuel filled in different stations, you will be left wondered with what went behind the scenes.

Social media is there for a reason and there’s been one particular individual named Sumit Parmar who has come up with a blatant compliant. He started the Facebook post by saying “petrol pump at their looting best” and went on to have a legitimate claim of what happened to him when he pulled in to brim the tank of his Mahindra XUV500. The Bharat Petroleum Station (Prem Service Station) in Moolchand, New Delhi filled four litres more than the original full fuel tank capacity of the XUV 500 (70 litres) with diesel. Sumit said there was already 10 odd litres of diesel in the tank and questioned where the extra 14 litres had gone. He attached the picture of his bill along with another snap taken during the time of filling as well.

When he asked the bunk authorities about how this was supposed to happen, they replied with some nonsensical answers like 1. You may have a bigger tank and 2. We know the police officials so we don’t have any problem, if you wanted you can report to them and he also said, our owner is known to Mr. Kejriwal so nothing can harm us. He was advised to take the matter to social media and the furious Sumit voiced for the many of us who have experienced such unresolved issues regarding the filling stations and the public manner in which their employees play underhanded money squandering. Raging over the way he was treated in front of his family, he said, the petrol bunk employees did’t respect the law because there was a highly influential owner behind their shadows to back them up. He called upon the power of social media and take the matter to profound lengths and the legion of Facebook users responded brilliantly and the post went viral with 12,000 shares in just a day. Consequently, he received a message from the Petroleum Minister Mr. Dharmender Pradhan himself, on his complaint to BPCL, assuring him of a solution.

Sumit Parmar also had been rang up several times by the BPCL Mumbai and the filling station asking for a formal meeting. He was buoyed by the swift attention received and expressed his gratitude towards the government in making this possible. Everyone has social issues but only few would bring it to daylight, this article is purely depend on the fact that ‘our voices should be heard’ and the hard-earned money shouldn’t be wrongfully plundered. If you have any such automotive related legitimate complaints, feel free to mail us at: contact@gaadiwaadi.com