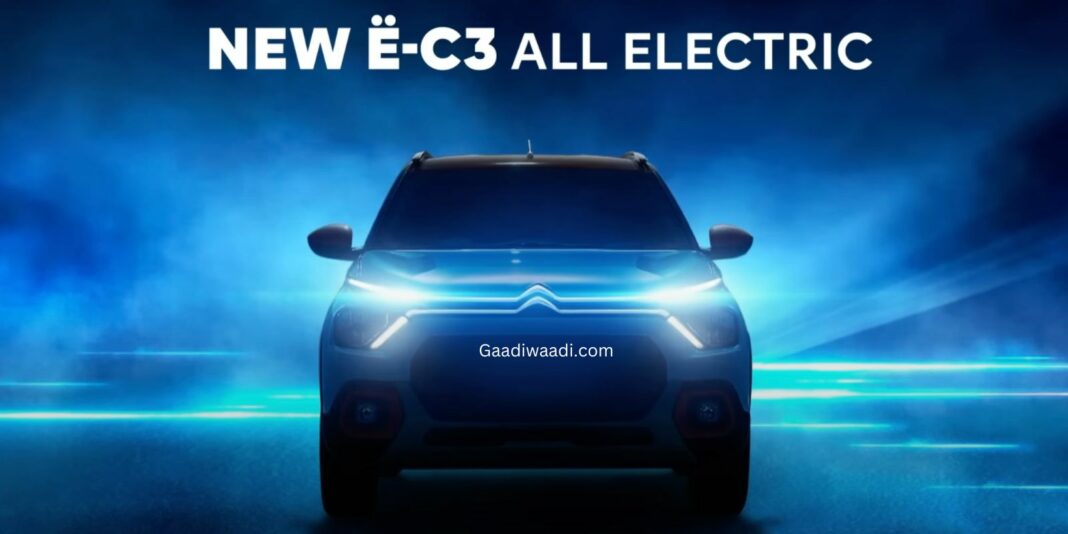 Citroen is set to unveil an electric version of its popular C3 compact hatchback in the domestic market within the next few weeks. The vehicle, known as the eC3, has been spotted testing multiple times and teased officially as well. The five-seater is expected to be priced around Rs. 10 lakh (ex-showroom) and will likely compete with the recently introduced Tata Tiago.EV.

The latest teaser video lasting 31 seconds shows the frontal portion of the upcoming electric hatch and as we expected, it has several commonalities with its IC-engined sibling. The apparent exclusion will be the tailpipe and the charging port will be fitted on the front fender. The front fascia shows the presence of the double chevron grille leading onto the headlamps via LED Daytime Running Lights.

The octagonal-shaped air intake, bumper-mounted lighting unit and faux skid plate will also be available. The cabin will also be similar to the ICE C3 barring the addition of a new drive controller. A recent spy photograph of the inside of the Citroen eC3 has revealed that it will not include an automatic climate control system or keyless entry.

However, it does seem to have an Eco mode. The EV is expected to have a 10.2-inch touchscreen infotainment system with wireless compatibility for both Apple CarPlay and Android Auto, a four-speaker sound system, a steering wheel with mounted controls, and so on. The French automaker, Citroen, plans to use LFP (Lithium Iron Phosphate) cells from Svolt Energy for the eC3.

The upcoming Citroen eC3 will be equipped with a 30.2 kWh battery that powers an electric motor located on the front axle. This setup is capable of producing around 84 bhp and 143 Nm of torque. It will also feature a 3.3 kW onboard AC charger and is expected to have a driving range of approximately 350 km. We can also expect fast charging capability.