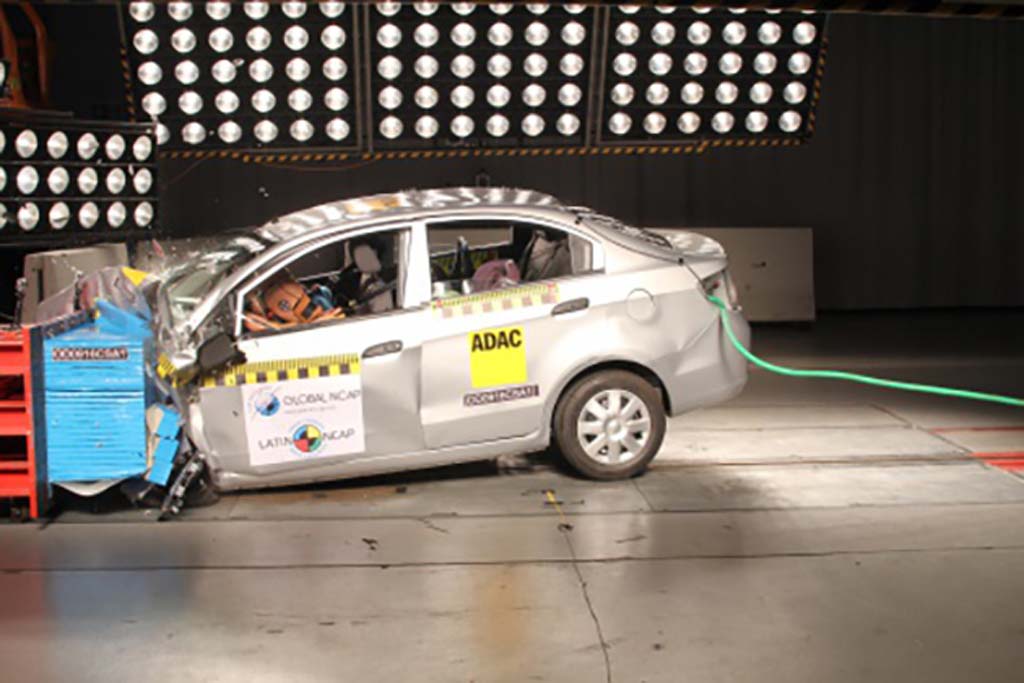 It became a serious concern for the Latin NCAP and their parent body Global NCAP, when they found that the Latin America spec Chevrolet Sail got zero rating for adult safety in the crash test conducted by Latin NCAP. As it seems, the general Motors is taking an advantage of weaker safety norms throughout the Latin continent and Caribbean islands.

Chevrolet Sail is a quite popular compact sedan in the Latin American market. The facts revealed in the crash test shows that the car received zero rating for the adult occupants, while on the child safety front it has got only two star which is very poor. The structure of the car was rated as unstable and unable to withstand major loading. The driver has maximum risk of life threatening injuries in the head and the chest, as there is no airbag. In case of a frontal impact the passengers chest faces compression close to the allowed limit.

No side impact test was performed as the driver injuries explain everything. On the child safety front, the Chevrolet Sail gets ISOFIX anchorages for child restraint systems and child seats, which offers safety to the child occupants. It doesn’t come with 3 point seat belts. The child seats are not properly positioned, which makes it lose points.

Latin NCAP Maria Fernanda Rodriguez was shocked with the disappointing result. Global NCAP has pleaded to General Motors to fix their cars and make them safer. Global NCAP secretary David Ward believes, General Motors has chosen to exploit the weaker minimum crash test standards in Latin America. The American automaker couldn’t sell the same car in European and North American market, where safety norms are vehemently stricter. Mr. Ward also says, General Motors should come up with practical implementations of the ‘Speak Up for Safety’ program which the automaker announced two years ago.