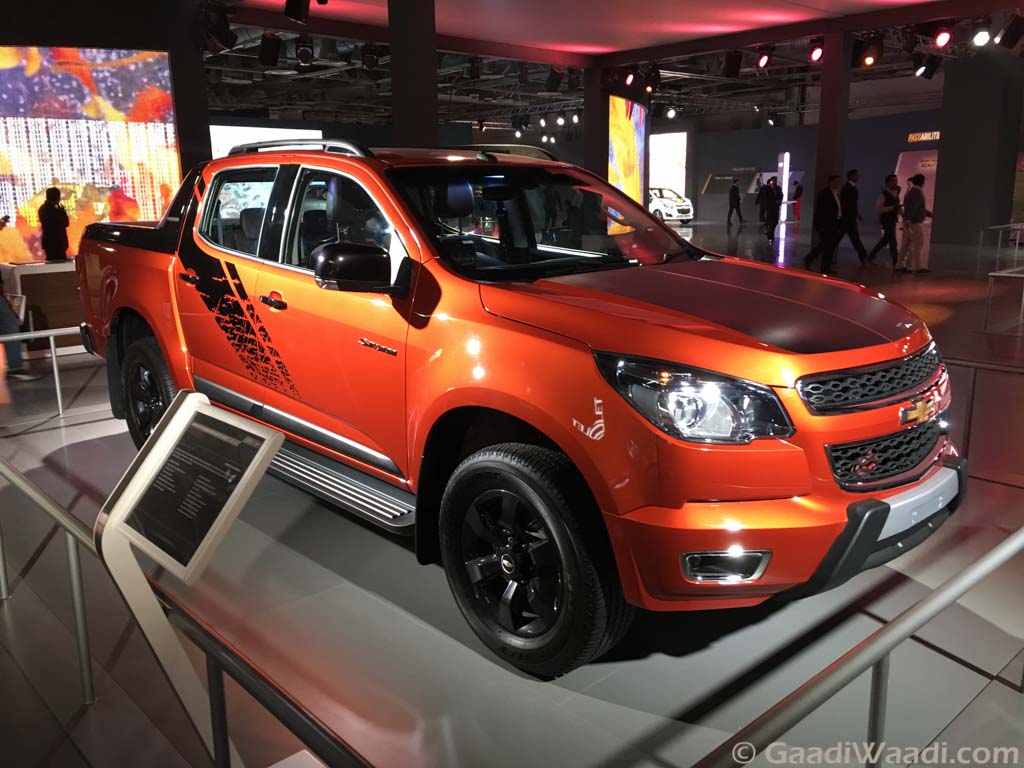 Chevrolet Colorado pick-up truck has been revealed at the Auto Expo 2016 today and it brought forth an imposing presence in the General Motors’ pavilion at the extravagant 13th biennial motoring show. Competing against the likes of GMC Canyon, Nissan Frontier, Ford F-150 and Toyota Tacoma in the American full-size truck market, it is based on the Chevrolet Trailblazer launched recently for the Indian market.

It is sold with variety of options such as extended cab and long box, crew cab and short box in addition to crew cab and long box. The three choices of engine line-up powering the heavy-duty truck are 2.5L I4 DI DOHC VVT engine, 3.6L DOHC V6 petrol engine and 2.8L Duramax turbo-diesel I-4 engines. The daunting pickup has been displayed at the Expo in an attempt to learn about the possibility and buyer’s perception of such an unprecedented segment domestically. The dual-port signature front grille with Chevrolet emblem, tall-riding stance, larger wheels and bumpers, huge wheelbase and wider bonnet visually make the Colorado a standout vehicle and it will appeal for a considerable band of customers. The standard 2.5-litre powertrain develops a maximum power output of 200 hp at 6300 rpm and 191 lb-ft of peak torque(258 Nm) at 4400 rpm. Optimised for fuel efficiency, the 3.6-litre unit is capable of generating 305 hp at 6800 rpm and 269 lb-ft of torque(364 Nm) at 4000 rpm whilst the 2.8-litre, dual-overhead cam, inline-four turbocharged diesel pumps out 181 hp at 3,400 rpm and a massive peak torque figure of 369 lb-ft(500 Nm) at 2,000 rpm.