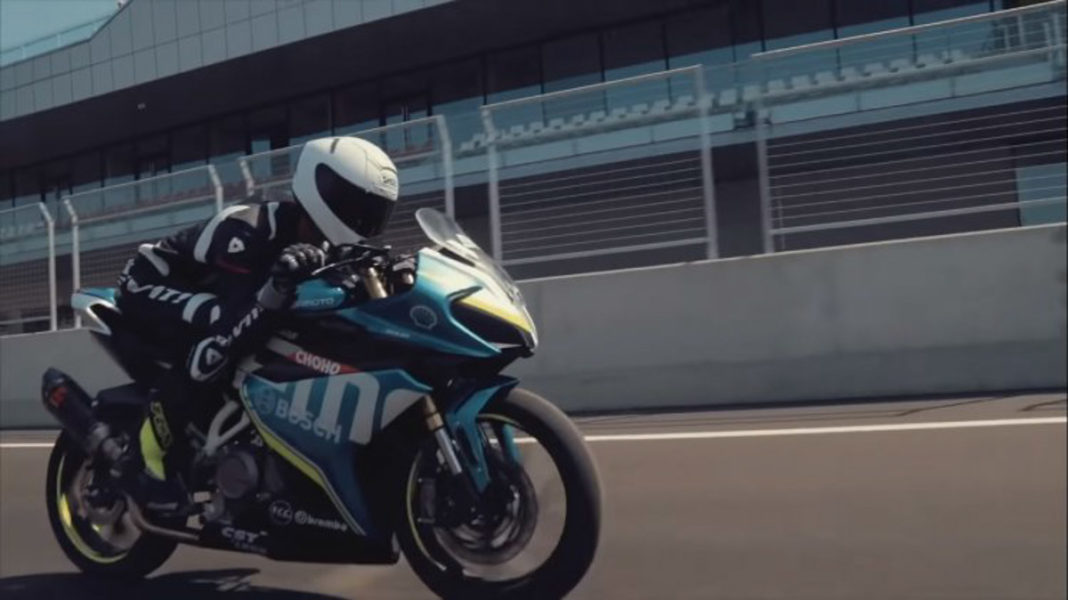 Only recently, we have informed you all that the Chinese two-wheeler manufacturer CF Moto is planning to launch a total of 3 new motorcycles in India soon. The motorcycles were also spotted a couple of times while testing on India roads as well.

The reports said that previously the Chinese two-wheeler manufacturer will introduce the 300NK, 650NK, and the 650MT in India but to everyone’s surprise, they have teased a completely new fully faired motorcycle christened the 250SR recently. Although the bike was revealed in a track-ready form, CF Moto will unveil the production-ready version soon as well.

The fully faired motorcycle shares its underpinnings with the 250NK. The motorcycle gets an aggressive looking front end. It will likely also get a dual LED headlamp setup at the front. Apart from the front end the motorcycle also sports a race inspired full fairing as well.

The edgy and sharp design is also continued towards the rear profile. Expect the upcoming motorcycle to share its 250cc, single-cylinder, liquid-cooled engine with its streetfighter sibling. The engine is expected to produce around 26 Bhp of peak power and 22 Nm of peak torque. The unit will be paired with a 6-speed gearbox.

The concept bike was spotted with an upside down forks however, you can expect the suspension setup to be replaced with conventional telescopic forks and a monoshock unit at the rear. The braking duties of the motorcycle will be handled by disc brakes on both ends. A dual channel ABS will also be offered as standard for the safety of the rider.

That said, CF Moto will make its India debut soon and according to the recent reports, the production variant of the 250SR will be one of their first motorcycles that will be introduced in India. It will rival directly against the KTM RC200, the upcoming Suzuki Gixxer SF 250 and the Honda CBR 250R. As far as the pricing is concerned, expect the CF Moto 250SR to be priced at around Rs 1.6 lakhs to Rs 1.7 lakhs (ex-showroom).