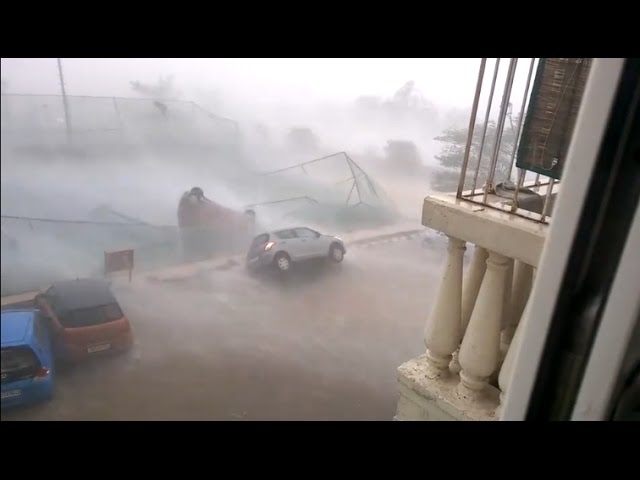 Cyclone Vardah has severely slammed the coastal areas of Tamil Nadu and Andhra Pradesh. In Chennai, several cars and bikes have been reported damaged due to the storm. Because of the high wind speed between 120 kmph and 130 kmph along with heavy rain, several trees and electric pole have been uprooted in the city causing havoc. Once, the cyclone’s wind speed topped about 190 kmph alarmingly.

Apart from that, the cyclone Vardah has caused landfall as well near Chennai city. Here in this video from a parking lot in the city, a car was seen lying upside down, while another car was toppled due to the heavy wind speed in the region. The exact same case has happened in several areas around the Chennai city, while the uprooted trees and electric poles have also caused damage to the cars and bikes at several other places as well.

The exact amount of damage due to the cyclone Vardah is still unknown and it would be revealed within 2 to 3 days when everything settles down. Due to the storm, the traffic system in the city has been affected seriously. Two deaths have been reported already as well. Several toll plazas are damaged due to the cyclone while major road lanes have been damaged.

Cyclone Vardah has taken the toll on Andhra Pradesh’s coastal parts too. An oil tanker was reportedly tipped over on the highway. Earlier this year in May, due to severe thunderstorm and heavy rainfall several cars and bikes were damaged in Hyderabad.

Chennai suffered due to the heavy rainfall and flood late last year. A major part of Indian automobile industry is located in the state of Tamil Nadu with many leading manufacturers having their production facilities. Let’s hope the cyclone would not shatter the livelihoods of people in Chennai as much as it’s predicted now.