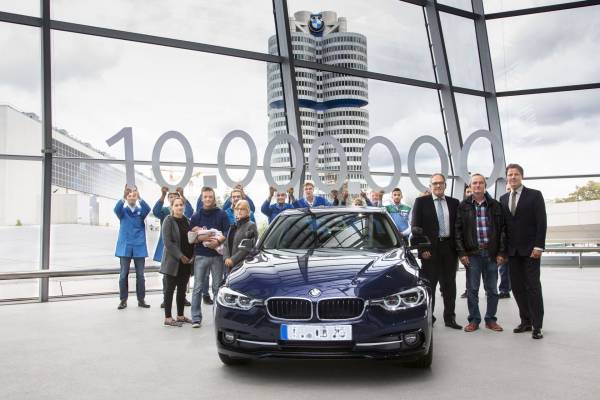 10 Million units of the 3-Series Sedan sold worldwide, the 10 millionth one goes to a training school

BMW 3-Series is one the most important products in the global market today for the company. The 3-Series Sedan model brings most of the cash to the company as it the best seller in the entire portfolio despite smaller car and volume oriented cars exist in the lineup. Today that model has achieved a milestone. The BMW 3-Series is also available in many forms like GT, Convertible and Coupe. The ten millionth BMW 3-Series Sedan sold  from the BMW Welt, a place where all the deliveries of the car take place for European and US owners. 14 million BMW 3 Series sold in more than 130 countries, the model is BMW Group’s most successful range. The success story began all the way back in 1975, when the BMW 3 Series was showcased for the first time at the IAA Cars Show (Frankfurt motor show) as the start of the line of sporty mid-range vehicles. The BMW 3-Series is known for best in class dynamics, efficiency and luxurious interiors. 3-Series continues to bring milestone to the company despite stiff competition from the competitors. The new 2016 Audi A4 and Mercedes-Benz C-Class have upped their game to all time high and despite that 3-Series soldiers on. All new model which comes in 3.5 years will be something extraordinary indeed as this model is already creating waves of success and sales as of now. 3-Series sedan is also sold in India and it sells almost 300 units every month. BMW also sells M3 sedan in India, which contributes, but a fraction of what the normal petrol and diesel engines equipped give in terms of sales. BMW will be launching the refreshed LCI 3-Series in the market soon.