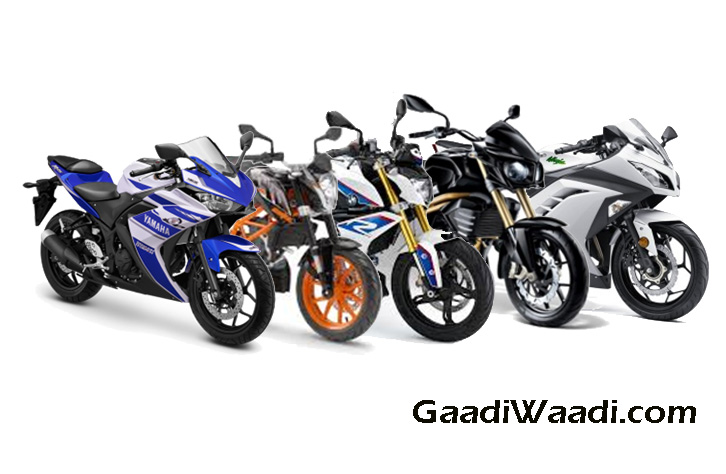 BMW Indian made motorcycle is finally here it is grabbing the right kind of attention too. TVS is helping them make it and helping them by sharing cycle parts of the highest quality Apache series of motorcycles.

Everything else and engineering is done by BMW guys as it is designed in Munich and made in India. BMW offers on paper a lot to consumers and ends up carving its niche just like the KTM Duke 390. Which surprisingly, even after the BMW is here, doesn’t seem to have any direct challenger in sight.

When it comes to styling, the motorcycles which are of Indian and Japanese origin have dual lamps. Meanwhile the Duke and BMW are single headlight equipped motorcycles. BMW looks like a fast tourer, yet minimalist. Meanwhile, the KTM looks like it won’t spare anyone in a fight, it’s that poised and dedicated street fighter with minimalist panels and a lot of orange color. Mojo was born to cruise and not let you get down till 500 kms are over. So the bulky, low stance and quirky design elements are seen on Mojo. R3 and Ninja 300 design language are very typical. Fairing, twin lamps and raised rear’s to making it look sporty. Ninja still looks premium and like its elder sibling. R3 is just a mixed bag as it just some R6 cues at the rear and nothing like before resembling the front. Overall, clearly Ninja gets top marks followed by R3 and then comes Duke 390, Mojo and then BMW, in that order.

Let’s start with the most comfortable motorcycle of the lot. The Mojo clearly is the best with front set pegs and relaxed riding position comes first with plenty of mid range grunt and good overall performance. R3 has the right balance to as the riding position is pretty upright and is comfortable with rear set pegs. Performance is good, engine is calm, yet has a great flexible power band. Ninja 300 has not so great low-end, a decent mid-range and top-end rush reminds you are riding a baby ZX-10R with a slightly dedicated riding position. Duke 390 has an aggressive riding position despite an upright stance.

Engine is downright aggressive and the mid range and top-end power comes in lumps and decimates in the competition in every roll on and acceleration test. RC390 pulls even better at the top-end. BMW will have its own unique way it takes the screws the powerband and sure to offer good dynamics.

Clearly the most equipped motorcycles here are the Europeans. BMW and KTM have high spec tyres, ABS, USD forks and Trellis frame for the Duke 390 and BMW G310R. Mojo has USD forks, but the Japanese continue to have regular telescopic forks. All of them have monoshock and everyone has them mounted on the swingarm meanwhile the Ninja has it mounted in linked fashion. Duke is clearly the most pin-point precise machines on the market, followed by R3 then comes the Ninja 300, Mojo. BMW should be as good as the KTM, but clearly we can’t put a verdict right now.

As of now clearly, on paper, the KTM Duke 390 seems unchallenged. Let it be faired or naked, 390 has the performance for the track and on the road while being absolutely fun to ride. R3 is almost there and it appeals to a wider audience as it is a calm and composed motorcycle. Ninja now lacks the performance and dynamics that the R3 offers. Ninja still has its charm with style and character.

Mojo is clearly the touring motorcycle and appeals to a wider audience just like the R3, but comes with a value for money price tag that it has on its side. Japanese motorcycles would have aced the test if they would be cheaper. However, thats where the KTM offers more performance, that too in spades.

It isn’t the most practical, calm or comfortable motorcycle around. BMW should change that to some extent and hence a definitive verdict comes when we ride it in real world conditions.