When Royal Enfield launched the Himalayan in a highly accessible price tag in early 2016, it received tremendous response but all was not smooth sailing as it had its flaws along the way. There were quite a large pack of drawbacks that had to be mended. Although RE reacted in rectifying the issues, they did act as its biggest achilles heel.

However, just as this YouTuber points out, the room for improvement is obviously persisting. He wrote them down so none of us misses it and spoiler alert is that he was not mentioning any of the manufacturing and quality defects that plagued the dual-purpose adventure tourer previously.

Starting out with the footpegs and the seat height, the rider’s triangle wasn’t even comfortable for long saddle time. He suggests either lowering the footpegs or increasing the seat height to address this big issue. He questioned the existence of the metal unit surrounding the fuel tank and says it does not have any value other than being of aesthetic importance.

Instead, Royal Enfield could have increased the fuel tank to around 20 litres. Many Himalayan customers who hit the terrain so often have lamented on the small fuel tank capacity. It would not help while standing on the pegs either and as indicated by Motorcycle Adventures it could not be grabbed on the knees due to its size making the ride discontent at times. While he did acknowledge the comfortable handlebar, the setup could have been a bit higher as normally seen in ADVs. It is no secret that the Himalayan comes equipped with 43 mm telescopic front forks to save costs but the unavailability of USD unit does hurt its handling and maneuverability according to him.

The tall windscreen, perhaps was the only feature that went without any complains in the video, as it does the assigned job of protecting rider from the wind blasts. He was convinced that the high-mounted front fender flap did not serve any purpose – barring its visual gimmick. Another area he wanted improvements was the crash guard section, as it should be redesigned for protecting engine and the rider. 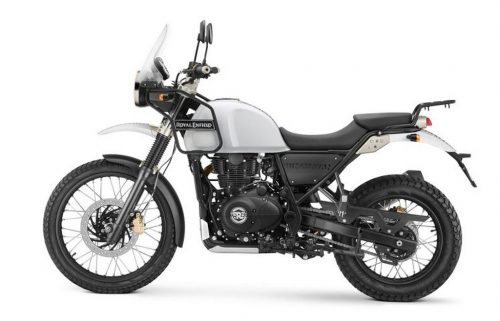 The seat was too cushioned and soft that it would be unbearable to be on during long hours of munching miles. It should be wider as well as harder to make matters easier. In latest bikes, the engine cannot be ignited when in gear if the side stand is not disengaged. But a major glitch in Himalayan’s system meant the engine turns on and even moves when the side stand has not been pulled, putting rider’s safety at risk.

The newly launched 650 Twins are testament to the improvement in quality standards the homegrown brand has made in recent times. If the next generation Himalayan gets its apparent problems sorted, will it be a conceivable hit for the brand?