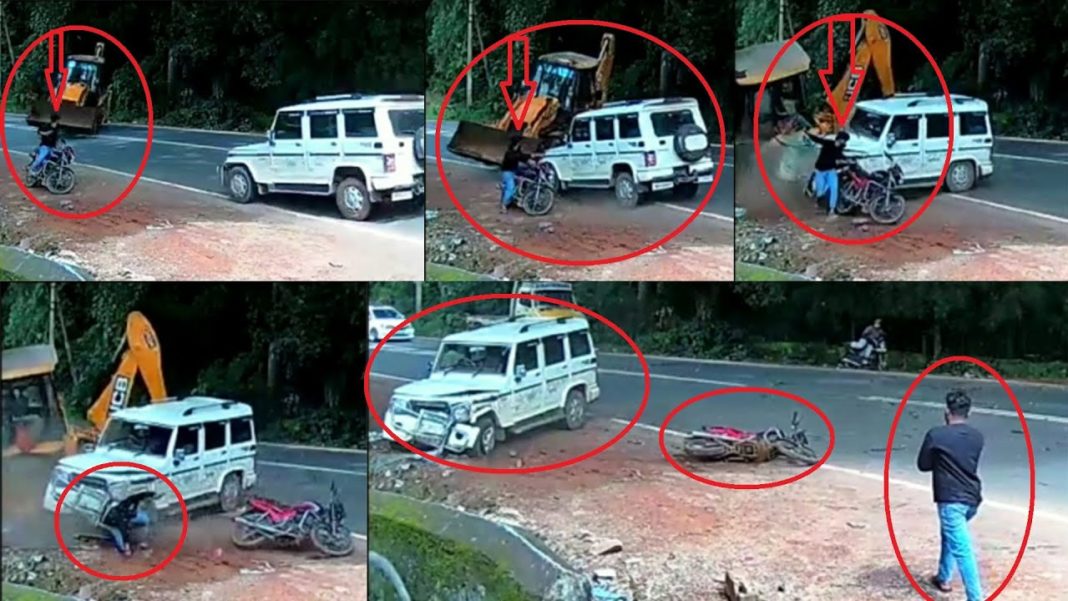 A lucky day for a man in Kerala, as Mahindra Bolero stormed into the path of a JCB saving his life

In life, you do not often get second chances and when they do come, you have to grab them with both hands. Everyday our lives have turned more into running to catch things than appreciating what we really have and as the transportation to places is more essential than in the past, our roads are flooded with traffic than ever before and this ultimately leads to more accidents.

Thus, we risk our lives every time we go out whether it is to the groceries or on a long ride to stray away from the urban jungle. We have shown you some dramatic accidents in the past but nothing comes as close to this, for being lucky. A motorcyclist parked his bike on the roadside and was sitting on it before this accident happened in a flash.

Occurred in Thodukappu in Karinkallathani on the Kozhikode/Palakkad national highway, the oncoming JCB seemingly lost control at high speeds. It was unsure whether it was a tyre or any mechanical failure but the driver of the JCB could not control it at that point and hurled towards the motorcyclist who could not see it coming as it was approaching from the rear.

Suddenly, the JCB turned into the oncoming lane and seconds before hitting the biker, it rammed into a Mahindra Bolero coming from the opposite direction. The MUV did save the biker’s life as its driver emergency braked and fell into the path of the JCB. Luckily, the drivers of both the JCB and the Bolero escaped without any major injuries.

The JCB hit a tree before coming to a half as its driver only suffered minor injuries and was admitted to a hospital nearby. The Bolero is one of the sturdy MUVs currently available in the Indian market and is known for its workhorse characteristics. It is a main reason why the rural market adores the Bolero and even Mahindra Group Chairman, Anand Mahindra, was appreciative of its robustness in the accident.

He replied to a tweet saying: “It seemed that the Bolero became a living thing and its only mission was to save the motorcyclist.”