Gaadiwaadi.com
Home Bikes News Believe It Or Not: These Are ROYAL ENFIELDs! 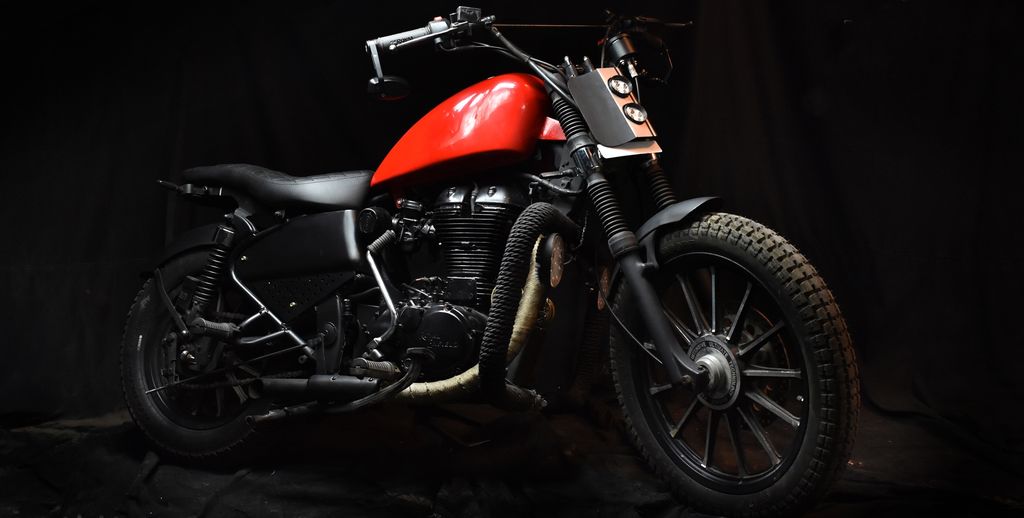 When it comes to modification, Royal Enfield is the preferred choice for enthusiasts across India and you won’t notice that these bikes are based on RE 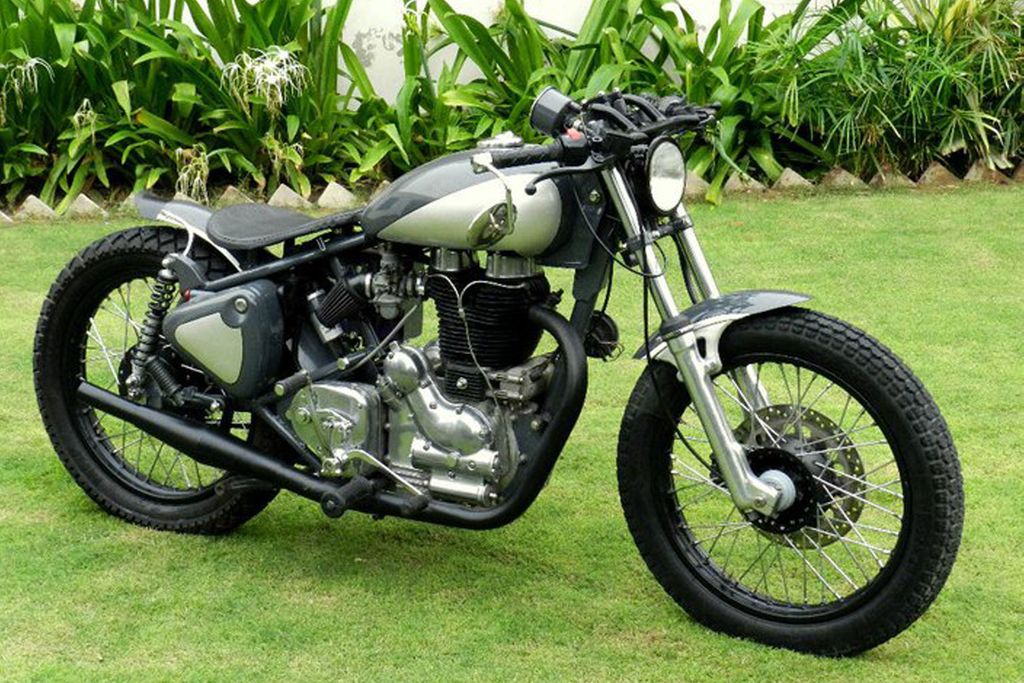 When it comes to modifying bikes in India, Rajputana Customs from Jaipur is one of the best in the country. They custom design bikes and most of the parts are rebuilt to achieve world class perfection, which is why they are so popular among customers in India and abroad. In this article, we are featuring Loco from Rajputana Customs.

The donor bike for this project is Royal Enfield Standard 500, Apart from engine most of the parts are re-built. The front get new telescopic suspension with different mounts compared to standard bike. The custom shop has given round headlamps and they have given small front fenders for minimalistic look.

The fuel tank is custom made for this bike and stock single piece handle bar is replaced by modern clip on handle bars. The single pod instrument cluster is placed on right side of  handle bar near electric start button and a drop down mirror has been given on same side. The instrument cluster has speedometer and odometer in it along with necessary indicators.

The stock side panels have been retained. Rajputana Customs has given single seat for Loco and it is thin compared to standard seats. The custom shop placed seat low on body along with forward set foot pegs and ergonomically positioned handle bar gives a comfortable riding position.

The rear fender is also small like the one on front. The stock rear suspension has been replaced by a new aftermarket suspension, which is tuned for comfort. The custom shop has given spoke wheels for Loco along with new thick side wall tyres, which is good for on and off-road riding. The engine remains stock.

The 499 cc single cylinder engine puts out 26.1 bhp of power at 5,100 rpm and 40.9 Nm of torque at 3,800 rpm. This engine is mated to 5 speed gearbox. The stock exhaust has been replaced with a custom made unit of Loco and it is finished in black colour. Rajputana Customs took 6 weeks to complete this project and modifications cost Rs. 1.5 lakh excluding donor bike. 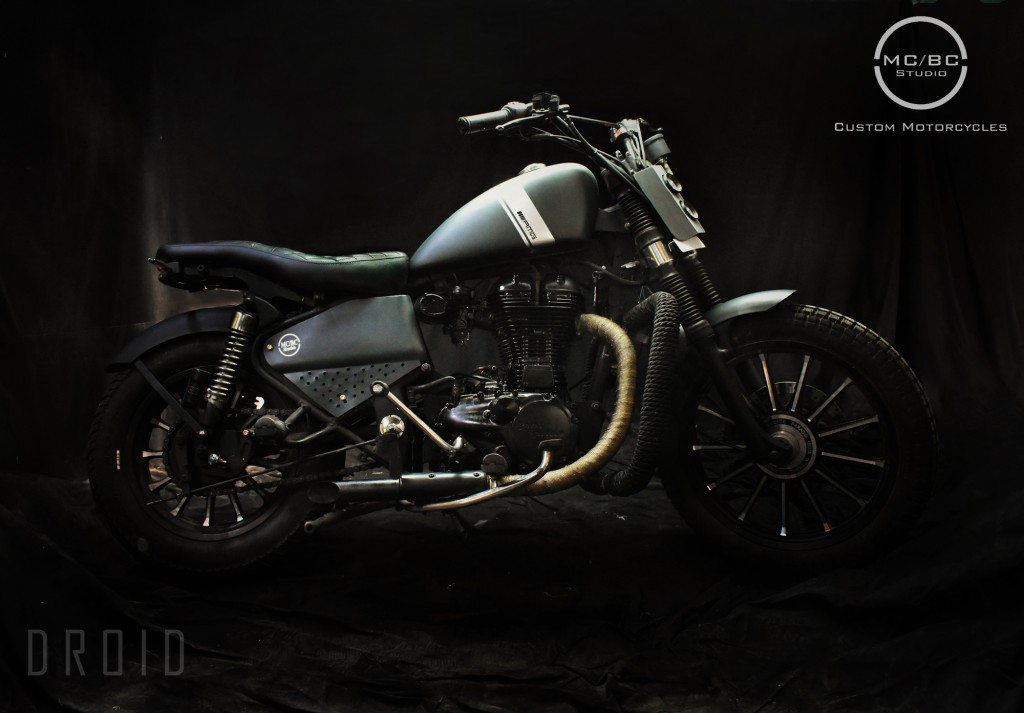 MCBC Studio is a customization shop based in Faridabad and their latest project is turning a Thunderbird 350 into a tracker motorcycle. We have already featured couple of Tracker series bike in our mod section. These types of bikes are focused towards performance with minimal body parts and they were very popular in early 80’s.

In current generation, only custom shops build tracker bikes. MCBC studio christened modified bike as DROID and most of the parts on this bike is custom build. Initially they stripped out all parts to begin works and front get beefier telescopic suspension and it is covered with black covers for all exposed parts.

The Droid comes with a small fender along with custom headlamp unit. The housing for headlamp is flat and it comes with LEDs to make it illuminate better in night. The fuel tank gets a unique design and it is custo made for Droid Tracker along with new handle bar which is positioned higher on the bike for a sporty look.

They have also given drop down mirrors placed on either end of handle bar. The seat is wider and longer like those on Scrambler bikes. MCBC Studios has also given a unique stitching pattern for seats. The stock side panels have been replaced with new custom panel, which goes well with the design.

The engine remains stock as 346 cc single cylinder engine produces 19.8 bhp of power at 5,250 rpm and 28 Nm of torque at 4,000 rpm. This engine is mated to 5 speed gearbox. To improve exhaust note, they have give a new custom silencer. MCBC Studios hasn’t released details of pricing and time took to complete this modification. 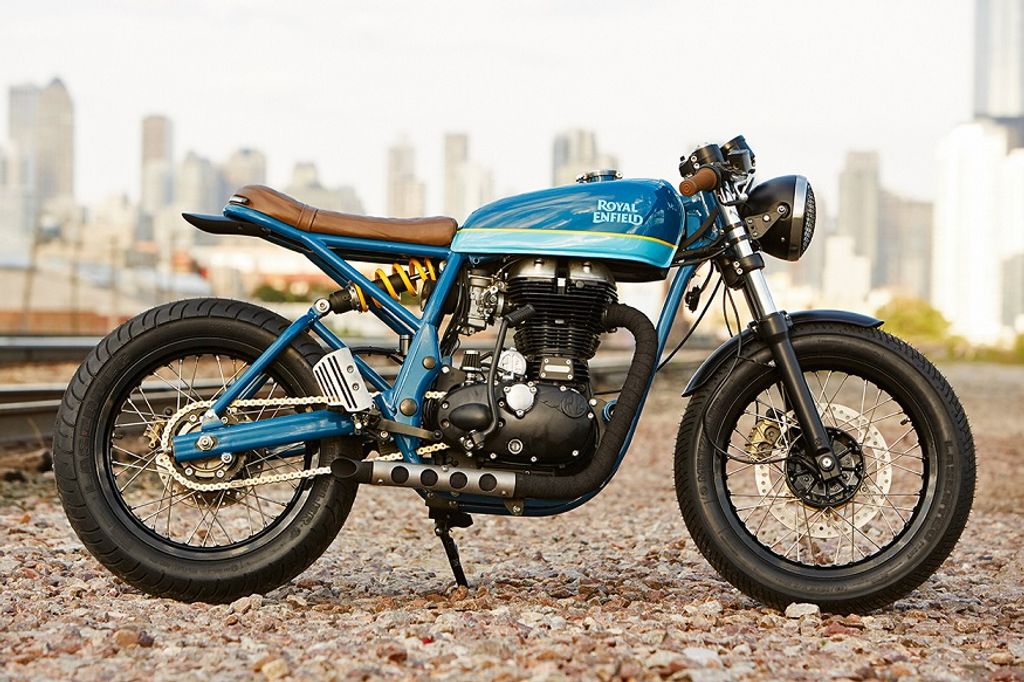 The Continental GT is one of the sportiest bikes from Royal Enfield and it is sold in many international markets. We have already seen so many modifications based on Continental GT and most of them are Café Racer theme based bikes. The latest one comes from Federal Moto based in Chicago.

Federal Motor took just frame, swingarm and engine from stock Continental GT as all other parts are custom made for this bike. The telescopic front suspension is finished in black and stock fender has been replaced by a new custom made one. They have also given new round headlamps for Continental GT.

The stock fuel tank has been replaced with a new custom made unit, which looks sleeker than the original muscular one. The Continental GT comes with clip on handle bars but the stock two pod instrument cluster given way for new single pod unit and it comes with analog tachometer with digital speedometer.

The custom shop has given new sub-frame, which improves rigidity and they have given new single piece seat. The seat is designed based on café racer theme and it is finished brown leather upholstery. Federal Moto placed foot pegs rear biased along with clip on handle bar and high seating position gives a sporty look for this custom bike.

The tail lamp has been integrated into the rear and they are LEDs. Federal Moto has given a small fender placed below seat but they haven’t given tyre hugger and number plate at rear along with indicators are also missed. The stock dual suspension has been replaced by new mono suspension, which is tuned for sporty ride.

The engine also gets some updates as they replaced fuel injected system instead of carburetor as it is tuned for better performance. The stock exhaust has been replaced for a new aftermarket unit for sporty output. Federal Moto also given Metzeler Lasertec tyres and stainless steel spoke wheels. The custom shop hasn’t given details about price of modifications. 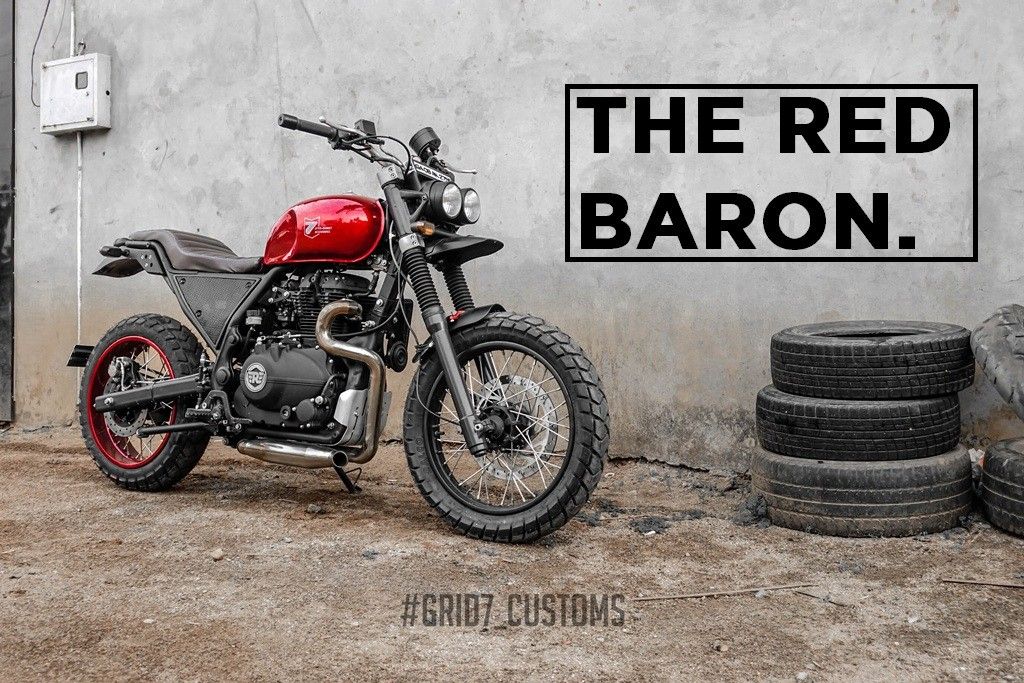 The Himalayan is the latest launch from Royal Enfield in India. Even though the bike had some quality issues, it is the most affordable off-road machine available in the country. The bike is focused towards adventure and has lots of potential for modification. Grid7 Customs based in Thrissur decided to give Scrambler look for Himalayan.

The Grid7 customs has made some changes for chassis and body parts are completely different from stock. The front gets new dual headlamps and fender is placed just below it, which gives a unique adventure design theme for the custom bike. The telescopic suspension has been retained from stock bike but they have rubber covers for exposed parts.

They replaced stock handle bar with a new one and it is placed slightly higher. The custom shop has also given new fuel tank and it is bigger than stock. To accommodate this new fuel tank, they have to make some changes for the chassis. The seat is custom made for Red Baron but the height has been changed for this mod Himalayan.

To give it a sporty feel, the rear ends on a high note and they have given small LED tail lamp. The indicators appear to be stock. The side panels are stock and it gives that it is Himalayan underneath. The stock instrument cluster has been replaced with new single pod unit, which houses speedometer, odometer and other important indicators.

The rear continues to have same suspension set up from stock model. The custom shop hasn’t played with foot peg position but the change in seat height along with raised handle bars makes the rider more comfortable. One of the unique modifications on this Himalayan is the aftermarket under belly exhaust.

The rear wheel is custom made as they have given bigger tyres at rear for improved grip. The engine remains stock as 411 cc single cylinder fuel injected engine produces 24.5 bhp of power at 6,500 rpm and 32 Nm of torque at 4,500 rpm. This engine is mated to 5 speed gearbox. The custom shop hasn’t revealed details about price of modification. 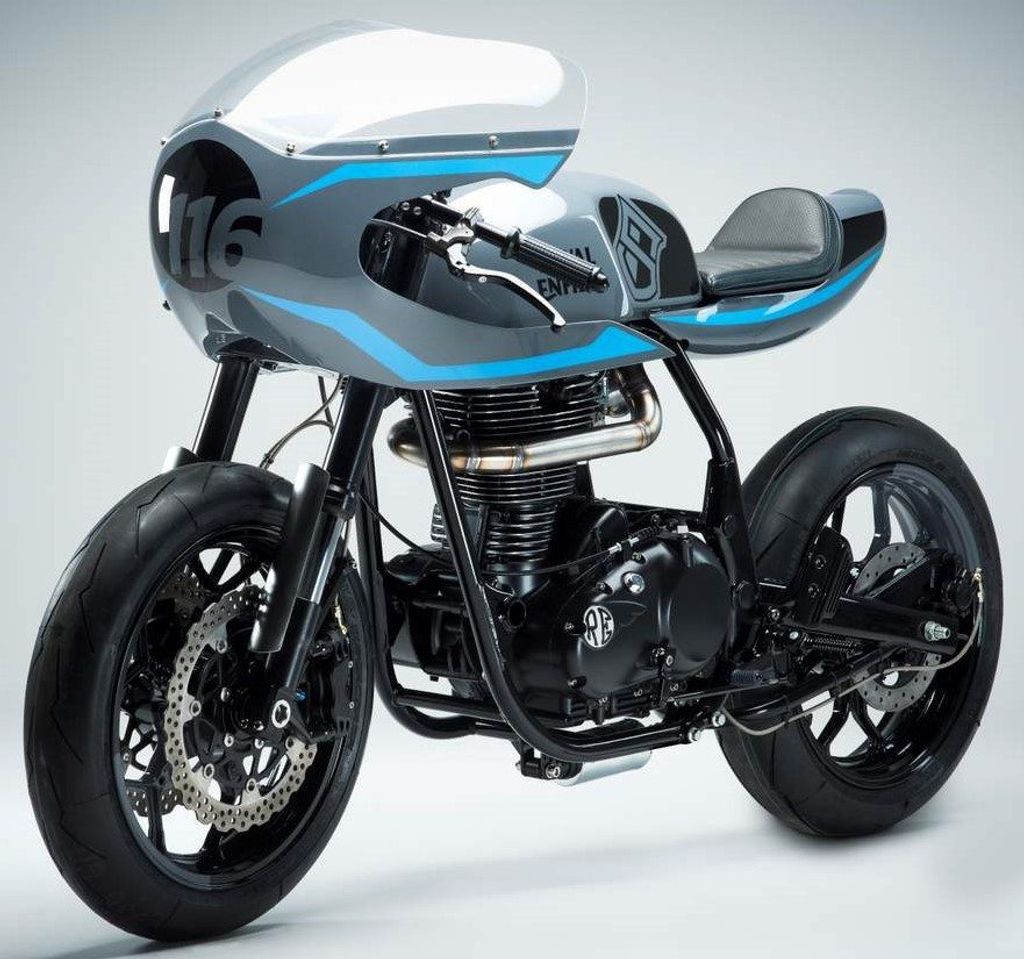 Royal Enfield Continental GT is popular around the world for its design but the bike has so much potential. We have already seen so many different modifications on Continental GT like café racer, touring to name few. But this modification done by Sinorja Motorcycles in UK is a dream come true for any bike enthusiasts.

The custom shop has completely transformed the bike to look like a racing bike with retro design theme for fairing. To improve performance, they have removed all the unnecessary body parts and this will help the custom shop to reduce weight considerably, except minor body panels like fairing rest of the body is exposed.

The front round headlamp with a semi-fairing and the design of fairing is like old racing bikes with huge visor. But the fairing and visor is designed to make it easy to cut through air with less resistance. The telescopic suspension has been replaced by upside down forks at front for better handling.

The fuel tank has been retained from stock bike but the handle bar is completely different and it is a clip on type and foot pegs are rear set. The stock instrument cluster has been replaced with an aftermarket unit, which has speedometer, tachometer and other useful indicators integrated into it.

The riding position is extremely sporty as they want to reduce drag, when the rider is on the bike. At the rear, they have given new mono suspension which is cleverly hidden from view. The custom shop has given exhaust under the seat, which is similar to sports bikes and it is tuned for sporty exhaust note.

The engine also has some modifications to produce extra power and in stock form, the 535 cc air-cooled, fuel injected engine puts out 29.1 bhp of power at 5,100 rpm and 44 Nm of torque at 4,000 rpm. This engine is mated to 5 speed gearbox and custom shop has given Pirelli Sport Demon tyres for excellent grip.