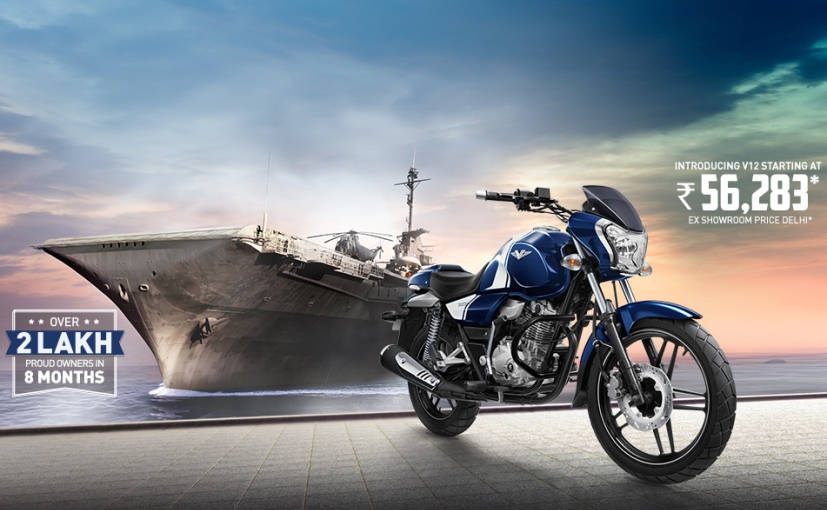 Bajaj V12 (Vikrant 125) is the second model launched in the V line-up; adopts design cues from the larger V15 sibling

Bajaj has earned plentiful appreciation with its unique looking V15 commuter which comes with the metal made from India’s legendary aircraft carrier, INS Vikrant. This touch of historic and patriotic glory have helped the Bajaj V15 to become rapidly popular among the customers in domestic market. Seeing the success of this motorcycle, Bajaj Auto has now launched a new model, which sits in the Vikrant line-up, below the V15.

This new motorcycle is a 125 cc commuter, christened as the Bajaj V12. The commuter segment in Indian motorcycle market is the most congested and competitive. While the 100 cc and 110 cc models rule the segment, new-age customers look for slightly more powerful motorcycles with attractive and sporty design. Having already grabbed attention with the first model in V series, another model will increase the range’s appeal further for Bajaj. The Bajaj V15 being successful with its unconventional design language, the all-new V12 dons similar styling. Therefore, we have now seen another sporty and part-café racer like commuter entering the segment with affordable pricing. Like its bigger sibling, the Bajaj V12 will surely get the precious metal from INS Vikrant. It will take on already established and tough rivals like Hero Glamour and Honda CB Shine. Here’s everything you need to know about the Bajaj V12: Power source for the Bajaj V12 is a 124.6 cc single-cylinder, air-cooled DTS-i engine borrowed from Bajaj Discover 125. Mated to a 5-speed transmission, this engine churns out 11 PS of peak power at 8,000 rpm and 10.8 Nm of peak torque at 5,500 rpm. It delivers an impressive fuel efficiency of 82.4 kmpl on the Discover and it will be more or less similar on the V12. The Bajaj V12 share its brake and suspension system with the bigger sibling V15. The V15 comes with a 240 mm front disc and a 130 mm drum brake at rear. For suspension duty, the 125 cc motorcycle gets telescopic front fork and gas-charged twin spring loaded hydraulic at rear. It runs on 18-inch front alloy wheel and 16-inch rear alloy wheels, wrapped in tubeless tyres, just like the V15. The Bajaj V15 incorporates a very unusual and attractive design. Its smaller sibling, the V12 also gets a similar design. This 125 cc Vikrant gets an imposing front fascia with chrome garnishing around the large headlamp. It sports an identical unique-looking instrument console like its bigger brother.

The handlebar and seat are designed in such manner to deliver the rider better control over the machine in heavy traffic as it is a city-focused commuter. A masculine fuel tank built with INS Vikrant’s metal bearing the insignia of the aircraft carrier, a removable rear cowl and a large laid-back LED taillight with chrome detailing gives it a sporty and charming look. In short, only the engine displacement comes different to appeal for a slightly lower band of entry-level customers. It also features similar colour schemes as the Bajaj V15.