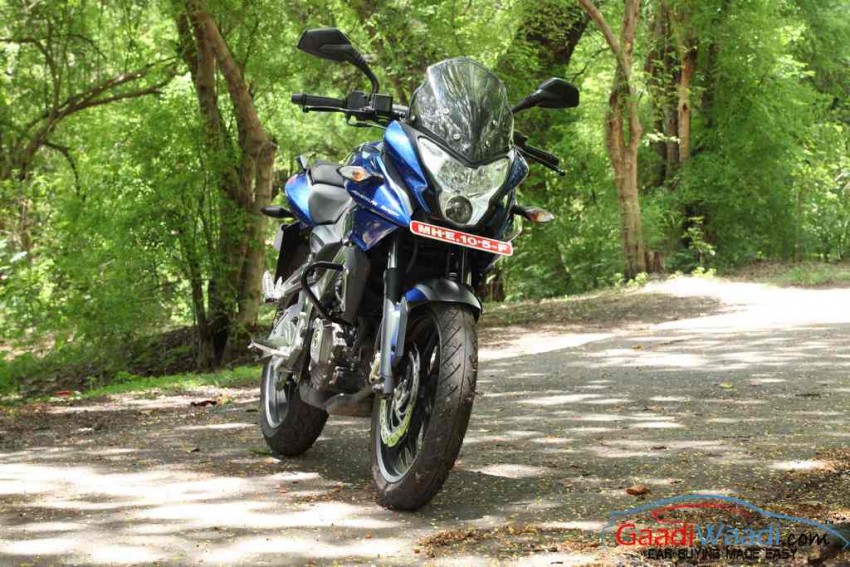 The AS series of motorcycles from Bajaj spawns a category and has seen 150cc to 200cc.

Bajaj has gone through a tough phase over the 9 months. The company’s market share went down by a considerable margin and no new products, despite being continuously tested were not being launched. Bajaj had a lot to launch as a lot of commuter and performance bikes on their way. Bajaj finally did launch these products one by one which were the commuter products and then the mighty Pulsars in their new generation avatars.

The AS, RS and NS series came in different engines and took the market by storm. The Pulsar RS200 turned out to be a blockbuster hit and the AS series is an extremely potent product for the enthusiasts that they have been waiting for. Today we have the same with us. The Bajaj Pulsar AS200 is based on the highly successful Pulsar NS200 but has even more to offer with a slight increase in the price tag. What is the least to the maximum change done on the Bajaj Pulsar AS200? Let’s find out!

Quite a substantial looking bike in terms of length and mass

At first glance it looks like the fairing has been bolted to the chassis and that’s about it, then you are wrong. There is a sub-frame in front which carries the new fairing. The rear mudguard has been added that is typical of old Pulsar. Rear hugger is also a new addition to the AS when compared over to previous Pulsar’s. The front fairing has a projector stuck into it for low beam and the pilot lamps now have white LED’s in them.

This arrangement is seen on the Pulsar 220 before. After all Bajaj Pulsar AS200 is made to replace the gracefully aging Pulsar 220. Rest of the parts are the same as the Pulsar NS200 which are the seats, tail piece, tank and instrument cluster. Fit-finish is just about average and there was just one unknown rattling witnessed during our ride, something that seem that could be easily fixed.

Console carried over, has good amount of information

The console and switchgear also remains the same as Pulsar NS200. All of this means that the switchgear has blue back-lit illumination and misses out on self-cancelling indicator and layout and buttons remains the same. Meanwhile, the cluster has the analog tachometer and digital speedometer. The left pod is there to show shift lights such as high beam, neutral, permanently lit bajaj logo, battery warning and engine temperature. Shift light separately mounted on the top in typical Bajaj Pulsar fashion acts as redline light and low fuel warning indicator.

The Pulsar NS200 had a sporty yet upright riding position and that is pretty much the same on the Bajaj Pulsar AS200. However, the seat height is slightly lower and since the clip-ons are raised higher it also give you sporty riding position, something that does not feel right nowadays with street fight motorcycles as handlebar equipped motorcycles are much better at this. Footpegs are rearset and lowered for a comfortable stance even for tall people. Dimension wise, the length has increased by 53mm and height has been increased by 130mm. Do note, seat height and vehicle height is different. Seats remain the same which means they are well cushioned for daily commutes to long distance touring for both rider and pillion.

The engine of the Bajaj Pulsar AS200 is the same as the NS200 which means it carburetor engine with liquid cooling. The engine produces 23.5 BHP of power at 9500 RPM and 18.3 Nm of torque at 8000 RPM. Power and torque figures the same and so does the gearing. Fuelling is good throughout the rev range and its not jerky at slow speeds. Power delivery is linear, but you do feel the kick around 7,000 RPM mark till the 11,000 RPM redline. All of this translates to the same power band as before.

Adequate low-end torque with pin point precise mid-range and a healthy top-end power from this smooth and refined motor. The engine does feel a bit smoother than before and Bajaj says all the learning from RS200 has gone into making this engine as the RS200 engine is a benchmark unit and is where close to Japanese rivals in every single aspect. These points are, power delivery, refinement, NVH and nature of the power band as well.

Thanks to the new fairing, the top-end power is achieved a wee bit faster and the wind-blast is less so when you duck down you can cut the wind easily and extract the top-end power which the NS200 always had. No official performance figures have been claimed this time and Pulsar AS200 should do 100 around the 10 second mark and top speed should be around 140 km/hr mark.

Gearbox is smooth and precise and throws are perfect which means they are on the shorter side. All of this makes the AS200 a daily commuter, a weekend rider and even long distance tourer. Fuel efficiency is also around 35 km/l ball park and at highway speed it should easily cross the 43 km/l mark.

Handles really well, is quite nimble, tyres spoil the case

We all know how the sweet was the Pulsar NS200 in terms of handling. Equipped with a perimeter frame along with gas charged monoshock and telescopic fat forks at the front, the Bajaj Pulsar AS200 also is pretty much identical. The suspension is on the softer side than the NS200 but it isn’t that soft that you can’t enjoy corners and would feel floppy like last gen Pulsar. All of this results that ride quality of the bike is amazing and seals the deal when it comes to long distance touring which the bike is aimed towards.

The AS200 feels pretty nimble and agile in the corners and while sweeping from left to right. Damping is just so right, but when you approach the limit the chassis does flex a bit, but the trade off is that mid-corner bumps are well taken care of. However, due to poor grip from Eurogrip tyres it isn’t glued to the road and feels its scraping it tyres on the surface of the tarmac rather than being knee deep in when it comes to grip.

Turn-in is good for this kind of vehicle with slightly raked out nature plus the front heavy feeling makes it rock solid at changing directions at high speeds on the highway and triple digits cruising goes unnoticed until you look into the console.

It is hard to fault the Bajaj Pulsar AS200. The model is based on the successful Pulsar NS200 and comes with small improvements that were needed on AS200 to make it a very sweet deal. Sure, Bajaj could raise the suspension, increase fuel tank capacity and stand true to the name that AS200 has (Adventure sport) and that did not happen.

Surprisingly, the AS200 comes with the same price tag of the NS200 which is clearly a shocking and value filled proposition. All in all, faired motorcycle proposition is always a better one in India when it comes to our biking scene and this time, like every time, value and performance along with the Pulsar mark has struck the right cords indeed!