Soon after trademarking names like Pulsar Elan, Pulsar Eleganz, Twinner and Blade, Bajaj has now filed a new registration request for its upcoming two-wheeler in India. To be called the Bajaj Dynamo, this new two-wheeler is expected t be a new electric offering in the Indian market. Here are all the details about this new upcoming Bajaj two-wheeler in India that we know so far.

Bajaj currently only has one electric scooter in its Indian line-up and is expected to expand its electric portfolio in the coming years. This leaves us with strong hopes that it has trademarked the Dynamo brand name for its upcoming electric two-wheeler for the Indian market.

The brand is also said to be working on introducing an electric iteration of the Pulsar while it is also working with KTM and Husqvarna for the development of new electric two-wheelers for India. The official specifications or other details however are yet to be shared by the brand. 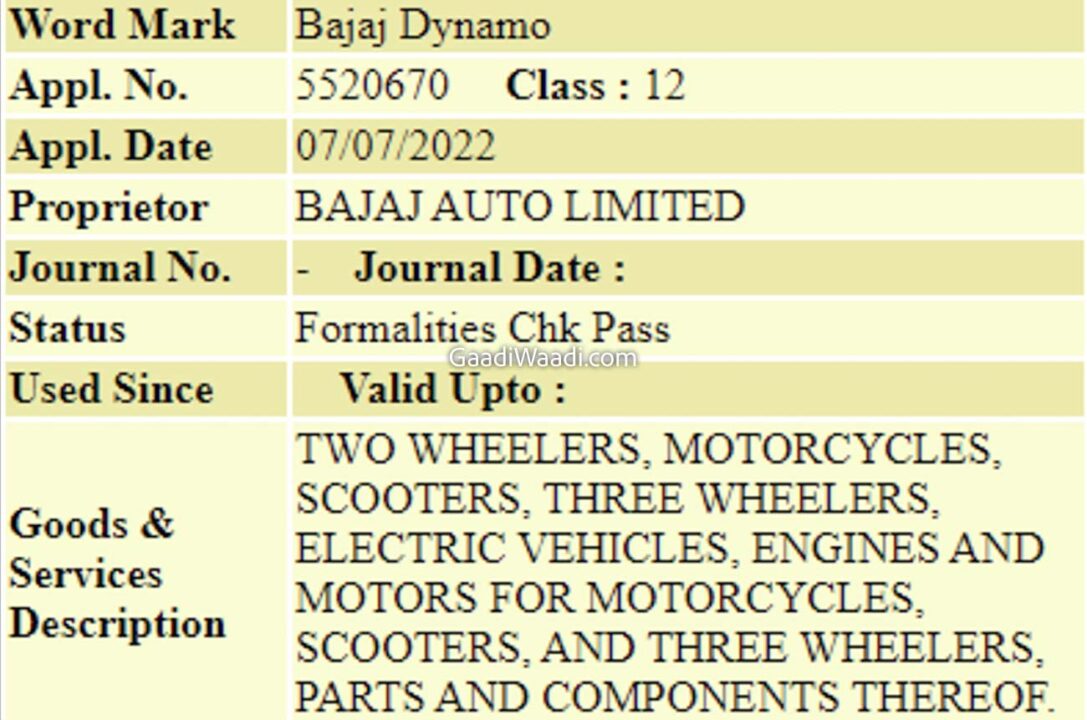 The Bajaj Dynamo has been trademarked under Class 12 and can be used for both ICE as well electric offerings. The brand had earlier filed trademark applications for its other upcoming two-wheeler offerings in India including new iterations of the Bajaj Pulsar.

A few online reports however also suggest that the name Dynamo might also be used for the brand’s upcoming electric three-wheeler for commercial operations. If launched, this new Bajaj electric commercial vehicle will be utilised for B2B and B2C operations.

The brand is also said to be working on introducing the electric Chetak in other international markets. It is expected that Bajaj will be targeting the ASEAN markets first after which the scooter will be introduced in other countries.

Apart from this, new variants of the Pulsar are also expected to be introduced soon in India. Other higher-capacity performance bikes are also expected to soon make their debut in the Indian market to help Bajaj compete in a wider range of segments in the country. The brand however is yet to share more details about its upcoming two-wheelers in India.