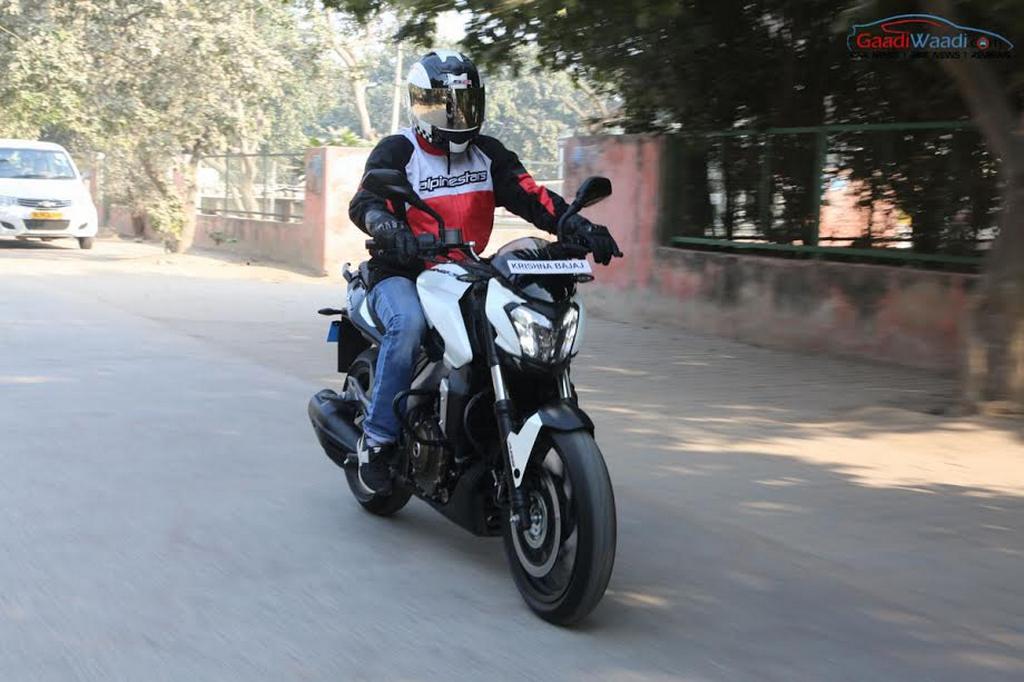 The all-new Bajaj Dominar 400 is powered by a 373.3 cc single-cylinder, liquid-cooled, DTS-i engine delivering 35 PS and 35 Nm of torque

Bajaj Auto is a valiant Indian two-wheeler manufacturer who brought a new category of ‘Pulsar’ performance bikes that are affordable for the youth to buy in the beginning of this millennium. As over 15 years went past, the largest exporter of bikes in the country is sticking to its guns in delivering the best package for the sporty motorcycle enthusiasts. With this newly launched Dominar 400, Bajaj expects to set new benchmarks and ‘dominate Indian roads in this segment for the coming decade’ as much as Pulsar series has been doing.

Bajaj certainly took its time in deriving the KTM-based affordable bikes’ technology on to its Pulsar range. Just as RS200 went up against Duke 200, the newly launched Dominar 400 lock horns with the Royal Enfield Himalayan, KTM Duke 390 and Mahindra Mojo. The ‘Dominar’ is a Spanish word that refers to domination or to rule or to control or to overpower and it has commenced a new brand for Bajaj altogether as the home-grown two-wheeler maker is making giant strides to stir up the competition in premium segment.

Bajaj’s strategic excellence will take another twist as the Dominar 400 is a new performance obsessed motorcycle in premium category and the most powerful motorcycle from the brand yet. The possibilities of the model becoming an elite product for the brand’s export markets are also high as it will be shipped from February to key markets like Turkey and Argentina. The bookings have also begun today on its official website and Bajaj expects to sell 10,000 units initially (both export and domestic combined). Here’s everything you need to know about the flagship cruiser from Bajaj:

The Bajaj Dominar 400 performance bike falls under the mid-size category and it is priced much lower than the KTM Duke 390 as the dual channel ABS version is priced at Rs.1.50 lakh and non-ABS at just Rs. 1.36 lakh. It is now the most affordable sub-400cc performance cruiser in the Indian two-wheeler market. The Bajaj Dominar 400 premium motorcycle derive power from a single-cylinder, four-valve, 373.3 cc DTS-i triple-spark engine derived from the KTM Duke 390. It is liquid-cooled and fuel injected to produce a power output 35 PS at 8,000 rpm – 8.5 PS lesser than the KTM 390 twins and 35 Nm peak torque delivered at 6,500 rpm. It comes coupled with a six-speed manual transmission and the engine has been tuned to deliver fuel economy of around 30 kmpl with the top speed of 148 kmph. It can accelerate from 0-100 kmph in just 8.23 seconds and has kerb weight of 182 kilos.

Bajaj Dominar 400 gets sizzling larger alloy wheels and drilled disc brakes at both the front and rear. The front wheel gets 320 mm disc and the rear features 230 mm disc brakes. It comes equipped with 43 mm telescopic front forks and rear adjustable monoshock suspension besides a dual channel ABS unit. Bajaj took us in awe when it debuted the Pulsar CS400 at the 2014 edition of the Indian Auto Expo. It was showcased alongside the Pulsar SS400 fully-faired performance motorcycle that spawned the now-range-topping RS200 with most of the styling bits carried over from the concept. Going by that, the Dominar 400 is a similar take on the naked concept and thus have an aggressive overall stance.

It shares components with the KTM Duke 390 that received tremendous response not only in India but worldwide. The Bajaj Dominar 400 has 200NS’ silhouette with bold and large headlamps. Unlike the clip-on in the RS200 for better long commuting, the Dominar 400 gains flat handlebar. It features digital LCD instrument cluster displaying all necessary info – similar to what we have seen on the concept and another display on the fuel tank. The halogen headlamp unit at the centre is surrounded by LED lights – a segment first feature with Auto Headlamps On function (AHO). Gear shift indicator with white backlight, sculpted tank, stepped saddle seat instead of split seats, body cowls are some of the other features available on the Dominar 400. The front suspension is multi step telescopic fork with monoshock setup at the rear. It have large 17″ alloy wheels, drilled twin channel ABS disc brakes up front and at the back.

The Dominar 400 will compete mainly against the KTM Duke 390, UM Renegade Commando, UM Renegade Sport S, Mahindra Mojo and Benelli TNT 300 and judging by the technical specifications, it could fancy some market share from the fully-faired Yamaha YZF-R3 and Kawasaki Ninja 300. However, Dominar will be targetting the market share largely held by Royal Enfield with the Classic 350 and perhaps Himalayan.