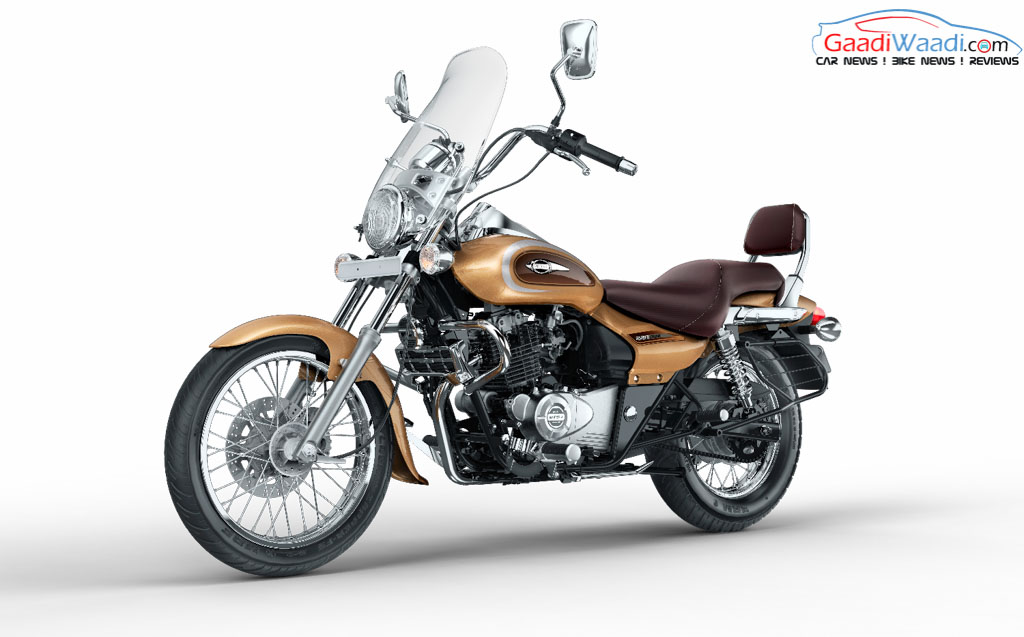 Bajaj Auto has silently launched the Avenger Street 220 with a new colour scheme and it has arrived at the Indian two-wheeler manufacturer’s several showrooms across the country. The new Avenger range was revived back in October 2015 with the 220 and 150 cc motorcycles. Of which, the Avenger 220 came in two variants: Street and Cruise.

While the Avenger Street 150 was aimed squarely at the affordable cruiser segment, the range-topping 220 twins thrust the legacy forwards. With design elements influenced heavily by the retro Harley Davidson models, the Avenger Cruise 220 has so far been offered with Divine Black colour. The new gold colour has been introduced to further boost up the already auspicious moving of the street motorcycle. The sales of the Avenger range has tremendously been catapulted in recent months due to the new entry-level Street 150 and the 220 street and Cruise models. The company recorded its highest-ever Avenger sales in February 2016 as 31,000 units were sold cumulatively. The position of the Royal Enfield Classic has been under threat due to the upsurge in the Avenger retailing figures. No mechanical changes are intended on the newly revealed Cruise 220 Gold as it’s just part of expanding the colour offerings. The Bajaj Avenger Cruise 220 is built on a tubular double cradle type chassis as the previous model and tips the weighing scale at 150 kilograms. The cruiser is powered by a 220 cc, single-cylinder, oil-cooled, DTS-i twin-spark engine which is good enough to produce a maximum power output of 18.7 bhp at 8,400 rpm and 17.5 Nm of peak torque at 7,000 rpm. The motor comes coupled with a five speed gearbox sending power to the wheel. This motorcycle has a fuel tank capacity of 14 litres and gets telescopic with anti friction bush suspension up front and twin-shock absorber at the rear. The stopping power is derived from a 260 mm disc brake at front and a 130 mm drum brake at the rear axle. It sits on 17-inch front and 15-inch rear wheels and measures 2,177 mm long, 806 mm wide, 1,142 mm tall and has a wheelbase of 1,490 mm with 169 mm ground clearance.