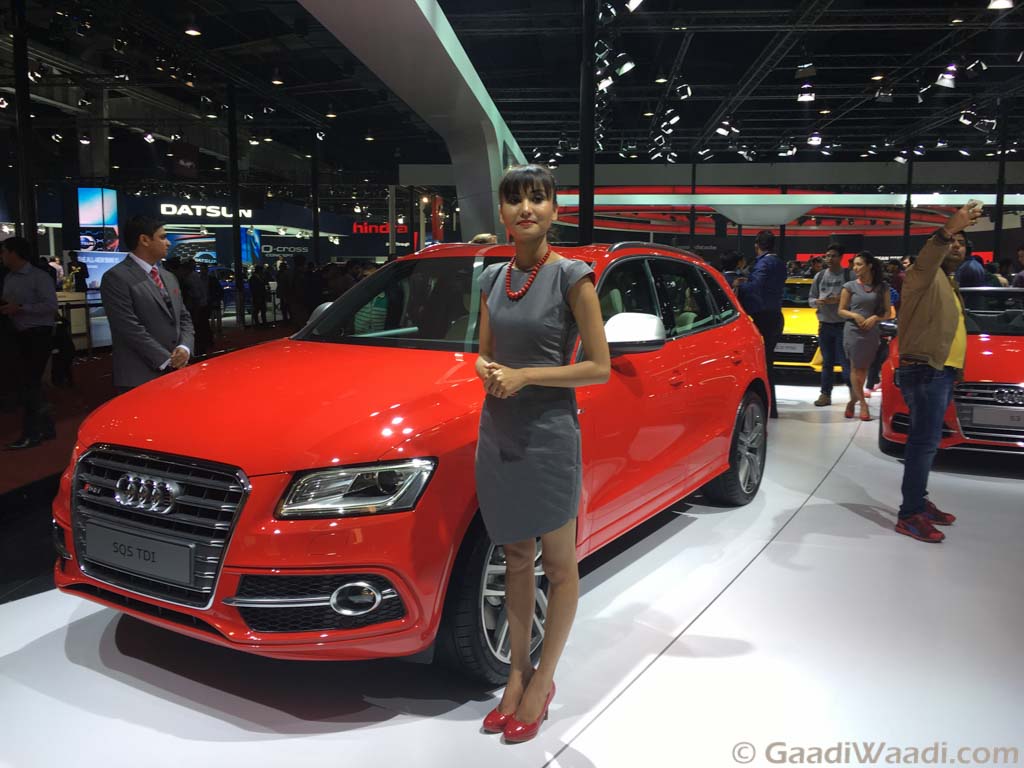 At the 2016 Delhi Auto Expo, Audi India has revealed the top-of-the-line sportier version of the Mercedes GLC, BMW X3, Volvo XC60 and Land Rover Discovery Sport rivalling Q5 SUV known as the SQ5. The Audi Q5 is one of the top-selling models in the German luxury auto maker’s current India line-up and the SQ5 will complement more to the sales of the SUV if launched.

The Audi SQ5 possesses aluminum roof rails and a sloping roofline with standard equipment includes newly designed 20-inch alloy wheels and optional 21-inch wheels for the preferred buyers. To flaunt its sportier appearance, the Audi SQ5 will come with all the signature elements of Audi’s S-badged models. The front and rear bumpers are restyled with platinum touches on the prominent gray grille and the diffuser. The exterior mirrors are garnished with aluminium accents as well, as does the housings and quad exhaust pipes at the rear. The front fascia receives the Audi Xenon plus head lamps with automatic self-levelling function and LED Daytime Running Lights for an aggressive road presence.

As for the interiors, the Audi SQ5 boasts a Audi connect touchscreen infotainment system with MMI navigation plus and WiFi provision for up to eight wireless devices, three-spoke multi-functional steering wheel with button controls and alu-optic paddle shifters besides contrast stitching to differentiate it from the regular Q5 model. The gray instrument panel gets white needles and there are aluminum inserts on pedals with leather/aluminum touches on the knobs. The Audi SQ5 SUV will come equipped with advanced driver aid and safety technologies such as the Audi advanced keyless start/stop and entry, Hill Assist Control, Audi side assist, adaptive cruise control and many others. The optional package can get you an Bang & Olufsen surround sound system with 14 speakers with a whole host of added equipment list.

The potent off-roader gets powered by a 3.0-litre TDI diesel engine coupled with an eight-speed tiptronic automatic transmission. The powertrain is capable of producing a maximum power output of 313 bhp and 650 Nm of peak torque. For the International markets, the Audi SQ5 comes available with both petrol and diesel engine options: a 3.0-litre TFSI petrol and a 3.0-litre twin-turbo V6 diesel motor.