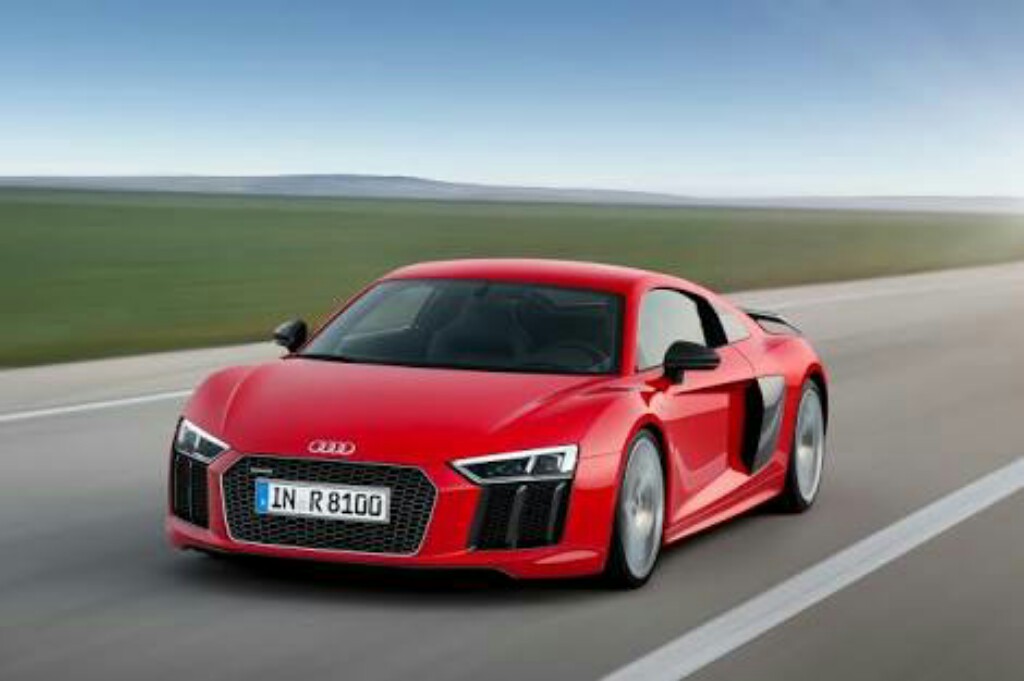 The forthcoming Auto Expo 2016 vows to be the biggest one yet with loads of new launches, concepts and technologies are in store to be revealed. Audi will jump into the bandwagon on the gigantic event with the new generation R8 super car, Audi A8 L Security and the Prologue concept.

The second-generation Audi R8 was built on the modern MSS (Modular Sport System) architecture that has been shared with the Lamborghini Huracán but modified for better space and comfort. It has a lightweight aluminum space frame chassis that helped in shedding up to 15% weight from its predecessor with central tunnel and B-pillars made from carbon-fiber composite. The Audi R8’s standard kit has 245/35 tyres up front and 295/35 at the rear fitted to 19-inch alloy wheels for superior on track performance whilst customers can upgrade their cars to 20-inch wheels as well. The new R8 is longer, wider and lower than the first-gen model and comes stuffed with techs like water-cooled front differential, electromechanical power steering and optional magnetic ride suspension.

The new Audi R8 is more angular with vertical sideblade having been split into two elements. It also has standard LED headlights and optional laser lights with more contemporary overall design rather than an evolutionary breakthrough but more up-to-date in comparison to the outgoing model.

The 5.2-litre V10 sits on a mid rear-engined layout is an evolution from the previous R8. The standard model produces 540hp and 398 lb-ft of torque and the mighty V10 Plus puts out 610hp and 413 lb-ft of torque. The sprint from 0-100kmph is claimed at 3.5 seconds and 3.2 seconds respectively. The standard V10 can reach a top speed of 321kmph and the more powerful V10 Plus can top out 330kmph – both significantly higher than the first generation model.

The gated manual has been ditched for DL800 seven-speed “wet” dual-clutch automatic transmission driving all-four wheels with a fully variable front/rear torque distribution alongside Dynamic and Performance driving modes. As in the TT, the Audi R8 super car will come featured with virtual cockpit, a TFT monitor display in front of the driver, multi-functional flat-bottom steering wheel and much more. Dubbed as the “most secured Audi ever”, the Audi A8 L Security made its global debut at the 2015 Frankfurt Auto Show. To back up Audi’s claims, the luxury sedan has been rated VR9 – the most stringent level for any civilian defense vehicle that can withstand ammunition from a belt-fed M60 machine gun.

Audi has taken the standard A8 L and fitted it with special aluminium alloy and aramide fabrics for body protection, hot-formed steel armour and run-flat tyres to create the A8 L Security with all the luxurious features that as well complies with Explosive Resistance Vehicle standards . With emphasis on security, the German manufacturer produces many components in a top-secret factory and clever combination of materials result in no increase of kerb weight compared to the older version.

The peculiar features in the armoured-vehicle are emergency exit, armored communications box, selective door unlocking, an intercom system, a fire extinguisher system and an emergency fresh air ventilator. The only luxury armoured sedan with all-wheel drive is propelled by a 4.0-litre biturbo V8 developing 435hp and 442 pound-feet of torque or a 6.3-litre W12 engine pumping out 500 hp and 461 lb-ft of torque. Unveiled at the 2014 Los Angeles Auto Show, the Audi Prologue concept mimics the proportions of the Mercedes S-Class coupe and could spawn Audi A10 coupe to rival against its benchmark German counterpart in the luxury sedan segment. It gives a glimmer of new design language the Ingolstadt-based company heading towards and most significantly previews the 2016 Audi A8 sedan.

The two-door luxury coupe concept gets powered by a 4.0-litre TFSI V8 petrol engine that churns out 605hp of maximum power and 700Nm of peak torque. It can do 0 to 100kmph in 3.7 seconds and the eight‑speed triptronic automatic gearbox drives all four wheels with the help of Quattro permanent four-wheel-drive system.