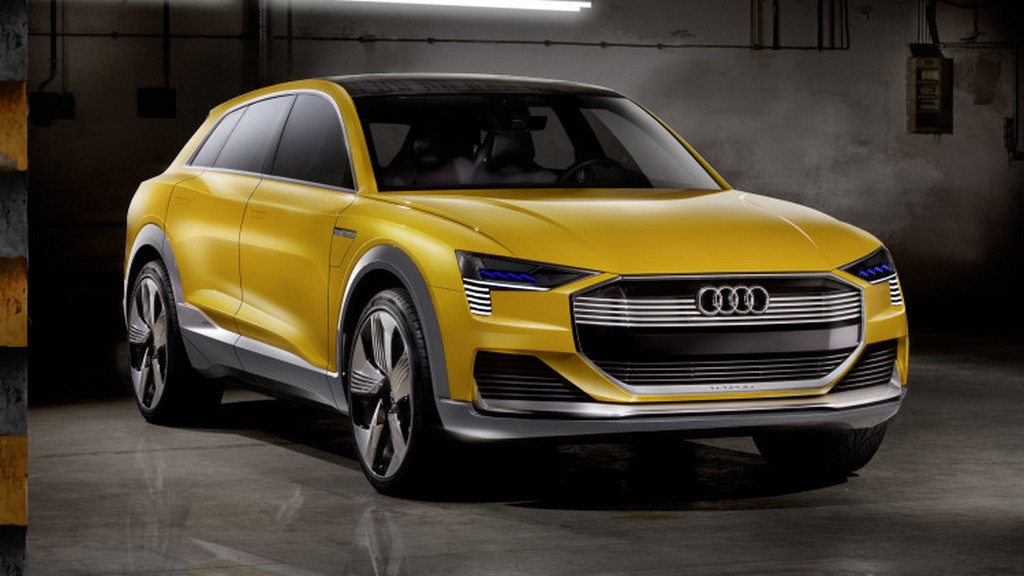 The h-tron quattro concept is Audi’s new take on future mobility with hydrogen fuel cells. It’s in closely association with the e-tron quattro all-electric SUV concept first showcased at the 2015 Frankfurt Motor Show. Both concepts are based on the second-generation flexible modular longitudinal platform (MLB evo) as they can be built with nearly identical floor assembly.

The h-tron is the fifth generation fuel cell technology concept manufactured from lighter materials for enhanced performance and efficiency. The 330 individual fuel cells housed in the forward structure has 60% efficiency rating. Triple hydrogen tanks of 700 bar pressure are installed underneath the passenger or luggage compartment without hindering the interior. It provides a range of up to 600 km and the hydrogen tank is protected by several layers of gas-tight polyamide enfolded in carbon fiber reinforced polymer (CFRP) and glass fiber reinforced polymer (GFRP). Additionally, the tanks can be filled in just four minutes. The fuel cell produces up to 110kW (148 hp) of power and the lightweight lithium-ion battery, located beneath the passenger compartment for better centre of gravity, pumps out 100 kW (130 hp) of maximum power output and 550 Nm of peak torque. The power from fuel cell and the high-capacity battery drives two electric motors: a 90 kW (121 hp) motor located up front and 140 kW (188 hp) motor fitted on the rear axle. Braking energy is recovered and stored in the battery for power boost and the h-tron quattro can accelerate from 0 to 100 kmph in less than seven seconds whilst hitting a top speed of 200 kmph. A heat pump for the AC and a larger solar roof develop up to 320 watts which substitutes to adding up to 1,000 km range yearly. The h-tron concept features innovative technologies developed for piloted driving such as radar sensors, ultrasonic sensors, a new video camera system and a laser scanner. In the future, Audi plans to implement a central driver assistance system which can assume driving functions at speeds of up to 60kmph as opposed to separate control units currently available. This technology will be put into production for the first time on the next generation Audi A8 luxury sedan.