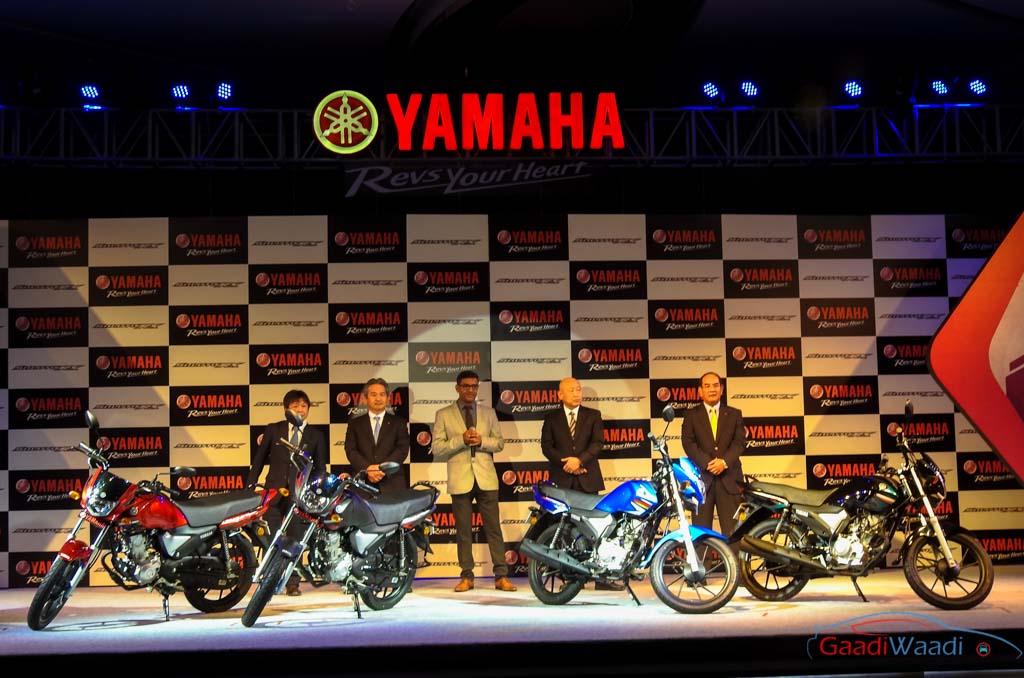 India Yamaha Motor Pvt. Ltd has launched a new entry-level commuter motorcycle today called the Yamaha Saluto RX as part of expanding its product line-up in mass segments. The Japanese two-wheeler manufacturer is on song in the Indian market as it recorded 44 percent growth in domestic sales as 60,032 units were sold last month compared to 41,640 units in the corresponding month the previous year.

On the face of increased sales and to sustain growth, the company is venturing deeper into the mass level segment as it reaped benefits concentrating more on tier II and III cities with the successful moving of the FZ series and the Fascino scooter. The entry-level Yamaha Saluto RX will go up against the bulk of rivals from Hero, TVS, Bajaj, Honda and Mahindra and will be aiming to appease customers from rural and semi-urban spaces. Yamaha had the Crux 106cc in this segment but it became obsolete in styling and mechanicals as years went by and later discontinued. Up the order, the Saluto does turn good sales numbers and has the next smallest engine with a 125cc unit. Consequently, Yamaha has taken the obvious route in basing the new commuter on the Saluto platform but with a new moniker to distance itself from the aforementioned 125 cc bike.

Yamaha is trying to make the most out of the festival season with refreshed product launches from the current portfolio. In the event of increasing its share, currently at 5 percent, on the market responsible for 16 million sold units last year, a new production unit in Chennai was inaugurated last month with an annual manufacturing capacity of 450,000 units. Investments of up to Rs. 1,500 crore will be fed in until 2018 and the new 110 cc motorcycle will play a pivotal role in the huge expansion plans. It will be positioned below the Saluto 125cc bike while filling in the shoes of the Crux. Here are the must-know things about the new entry-level commuter from Yamaha:

The Yamaha Saluto RX has been launched today at a price of Rs. 46,400 (ex-showroom, Delhi). Described as the affordable and smart street bike, Yamaha tries to lure in the growing band of young customers with this new motorcycle.

The all-new commuter targetting the mass segment gets power from a newly developed single-cylinder, two-valve, air-cooled, four-stroke, SOHC, 110cc engine. It has compact combustion chamber than the previous 110cc models released by the brand. It produces a maximum power output of 7.5 PS at 7,000 rpm and 8.5 Nm of peak torque at 4,500 rpm and comes mated with a constant mesh four-speed transmission. The Yamaha Saluto RX measures 2,020 mm in length, 740 mm in width, 1,045 mm in height and has a wheelbase of 1,255 mm. The ground clearance stands at 175 mm with the seat height at 785 mm. The motorcycle weighs in at 98 kilograms which is the lowest in its segment and at an estimated 22 kg lighter than its previous models in the same class. The suspension duties are dealt by telescopic fork up front and swing arm at the rear. The front and rear drum brakes of 130 mm diameter help in providing stopping power with coil spring and hydraulic damper assembly assist in absorbing bumps on the road. Carrying an evocative “RX” moniker, the low-cost commuter motorcycle is all conventional from the outside. It has design touches of its larger 125cc sibling Saluto but changes have been made to bring down the cost and place it very affordably. It has sleek headlamp and a smooth flowing body as well. It comes equipped with push button start alongside the regular kick starter. The speedometer and fuel gauge are indeed analog units.