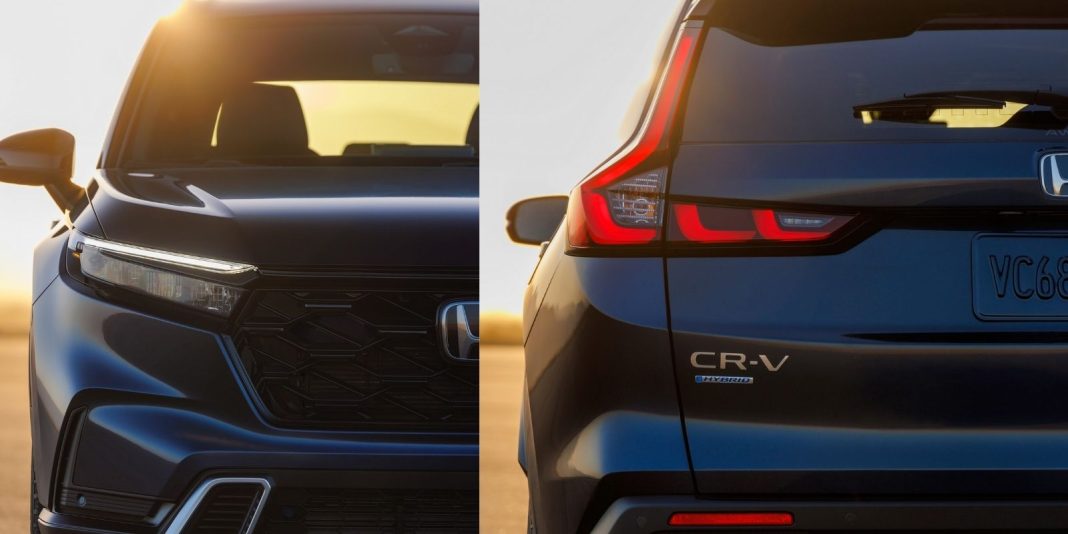 Honda has released the first teaser images of the new CR-V for the United States market following a set of leaked images of the undisguised prototype in China and it will make its global debut later this calendar year. The sixth-generation Honda CR-V gets a comprehensive makeover this time around with changes inside the cabin and outside.

One of the teaser images gives an early preview of the front fascia of the new SUV as the headlamps are redesigned while the LED Daytime Running Lights are brand new. The more upright front end also gains a more prominent grille section and in the hybrid guise, it is done up in black colour with the lower air inlets having a silver garnish on the revised bumper.

The tweaked bonnet structure is accompanied by L-shaped LED tail lamps having new signature and they extend into the tailgate with the Honda badge sitting in the middle while an integrated spoiler, high-mounted stop lamp, faux silver exhaust pipes and an updated rear bumper can also be seen. Compared to the Chinese-spec CR-V leaked online, the design looks pretty much similar.

Thus, Honda could be looking to sell an almost identical design with minor trim level changes across the globe, unlike the HR-V/Vezel. The Japanese manufacturer will offer multiple alloy wheel design choices and a host of accessories could also be on offer. It is said to have increased versatility and a more advanced hybrid system to offer sportier driving characteristics.

While the powertrain lineup is yet to be divulged, Honda will bank big on the hybrid technology and in the United States, a 2.0-litre naturally-aspirated four-cylinder petrol engine could work in tandem with an electric motor producing a combined power output of 212 hp as the outgoing model. It is currently paired with a CVT automatic transmission sending power to all four wheels.

A regular petrol engine is also expected to be on offer. It may as well get an electrified variant in the near future following the debut of the Prologue SUV by 2024.