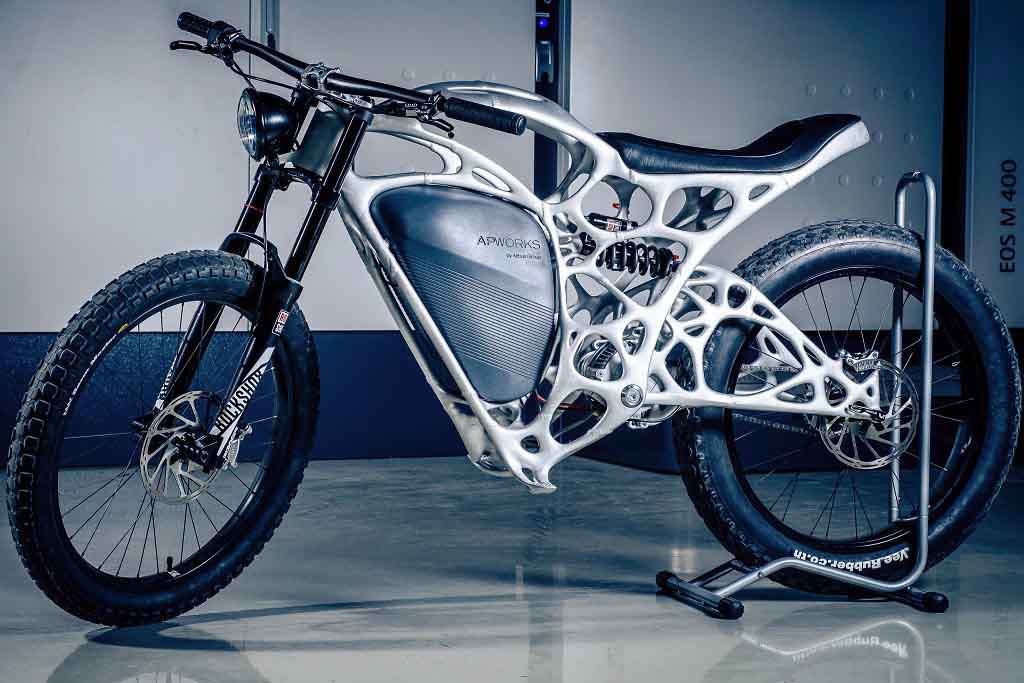 Airbus is one of the largest players in the world of aerospace industry. But as it seems the famous aerospace major tried its hand in designing and developing a concept motorcycle with the inspiration of aero space design. The motorcycle concept is dubbed as the Light Rider. Interestingly, this is the first 3D printed motorcycle of the world, and it draws the power from a fully electric powertrain.

The Light Rider is developed by the Germany based APWorks, a subsidiary of the Airbus. The unique concept motorcycle features attracting and fancy German engineering. The APWorks has used bionic algorithms to design the Light Rider concept, and the body frame o0f the motorcycle has been designed with inspiration from nature’s principles. It sports a round shape headlamp. No gauges or dials are visible in form of instrument cluster, which would make its way into the production variant albeit.

The APWorks claims, the Light Rider motorcycle concept’s body frame has been built using Scalmalloy, which is an high strength aluminium powder used for making aircrafts and the metal comes with strength of titanium and unrivaled capability when it comes to 3D printing. The Scalmalloy has been melted by laser to build the motorcycle frame. The Airbus Light Rider’s frame comes very light.

It has been built by thousands of 30 micron layers of Scalmalloy. No wonder why the motorcycle concept has been named as Light Rider. The Airbus is planning to build the motorcycle as a production variant, as an exclusive small series with only 50 units. The interested customers can book the motorcycle with $2229 while the price of the Light Rider will be around $55727.

Now, speaking about the technical facts of the Light Rider, don’t get surprised, the body frame of the motorcycle weighs only 35 Kg, which allows it to accelerate to 45 kmph from standstill in just 3 seconds. Power source for the Airbus Light Rider is an all electric motor, which makes it completely environment friendly as well. The engine churns out 8 bhp of peak power and 130 Nm of peak torque. The Light Rider has a top speed of 80 kmph and the engine capacitates the motorcycle with a cruising range of 60 kilometers.