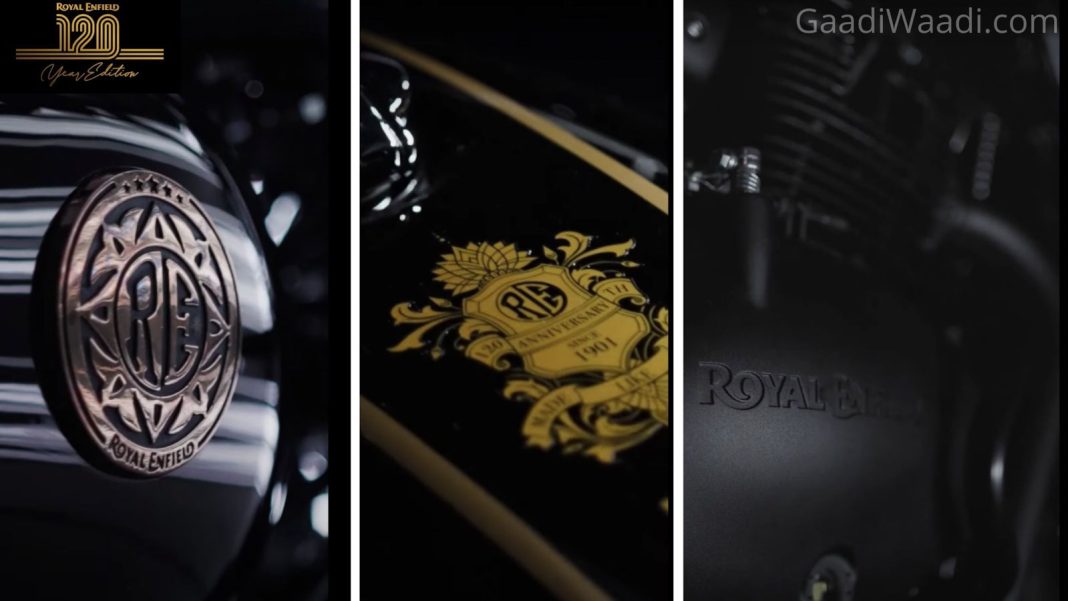 Royal Enfield appears to have big plans for the upcoming EICMA 2021 in Milan, Italy. The annual motoring show runs between November 23 and 28 this year and RE has commenced teaser campaign of its exhibits ahead of the grand event. The world’s oldest motorcycle maker in continuous production is bringing in a special edition of its flagship 650 Twins as evident from the latest 18-second teaser video.

The video shows the fuel tank of the 650 Twins getting quenched before the final paint design was applied as the ‘120 Year Edition’ logo and gold coloured horizontal pinstripes celebrate the Chennai-based company’s 12-decade-old legacy in the Indian as well as international motorcycle scene and EICMA will be used as an opportunity to further amplify the tribute.

Some of the nitty-gritty details that can be seen in the video are black finished engine casing indicating the existence of the parallel twin-cylinder engine, and the Royal Enfield emblem on the sides of the fuel tank. The 120 Year Edition of the Interceptor 650 and Continental GT 650 will likely be retailed in our domestic market and overseas.

Royal Enfield has had tremendous success with its latest line of motorcycles including the 650 Twins, Himalayan and Meteor 350 in the global markets and the range will be expanded further over the next two years. The new 349 cc SOHC air- and oil-cooled engine will power at least four new 350 cc REs as a Classic Bobber, Hunter 350 scrambler, all-new Bullet and a more affordable version of the Hunter are reportedly in the works.

In addition, RE is expected to host the world premiere of the flagship cruiser 650 based on the 650 Twins’ steel-tube cradle chassis and it could go by the name Super Meteor – evoking a legendary nameplate that was on sale in the United States in the ’50s. It has already been spotted testing a number of times on public roads, and it will more likely become the first RE to boast USD front forks along with low seating position and tall handlebars.

Back to the 120 Year Edition of the 650 Twins, we do not expect any mechanical changes to accompany the special edition as it will continue to be powered by the 648 cc parallel twin-cylinder SOHC air-cooled engine with 270-degree firing order. It develops just over 47 PS maximum power and 52 Nm of peak torque and is paired with a six-speed transmission with slipper and assist clutch as standard.