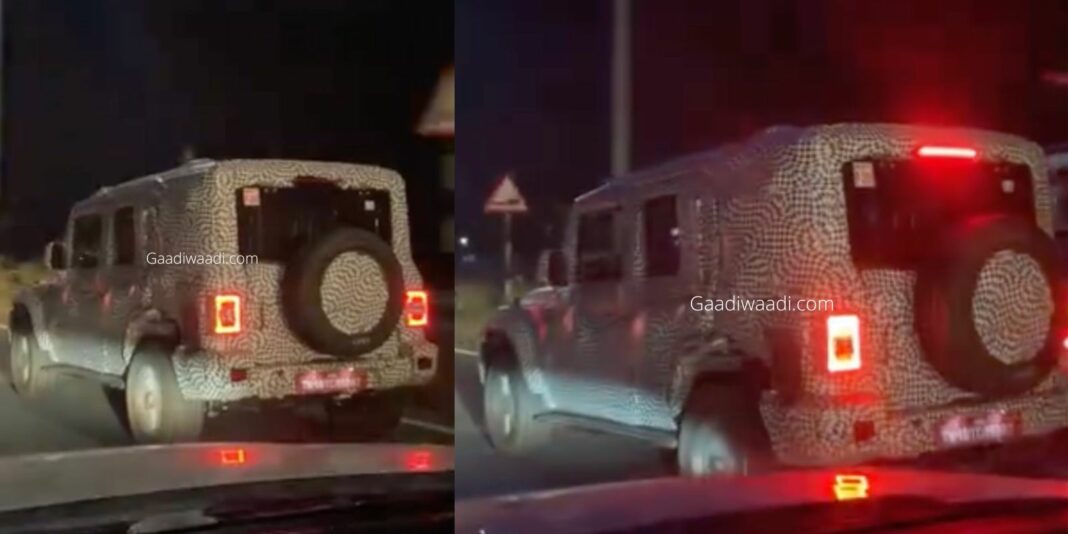 Mahindra has been spotted testing the five-door version of the Thar for the first time on public roads. The Thar received its second generation in 2020 and it has been a tremendous success for the brand. It has transitioned from a bare basic off-roader to a lifestyle off-roading SUV with more advanced creature comforts compared to the old model.

To carry the momentum, Mahindra is expected to launch the five-door avatar of the latest Thar sometime next year and it could make its world debut at the 2023 Auto Expo in January. It will compete against the upcoming five-door Force Gurkha and the long rumoured five-door Maruti Suzuki Jimny, which is also due to arrive next year. It will likely help in appealing to a wider set of audience with improved practicality.

The test mule of the five-door Mahindra Thar appears to be riding on a longer wheelbase compared to the three-door variant and the rear comprises an upright tailgate with a spare wheel mounted on it and rectangular-shaped LED tail lamps. The turn indicators are mounted on the flared wheel arch fenders and there is considerable space between the wheels and arches themselves.

The apparent difference is the addition of rear doors and longer rear overhang while the upright tall pillars, slightly raked front windshield, flat roofline, rectangular Outside Rear View Mirrors and concealed roof rails can also be seen. R Velusamy, Senior Vice President, Head – Automotive Product Development, confirmed in an interview that it will be underpinned by the same ladder frame chassis as the Scorpio N.

Courtesy of the longer wheelbase, the five-door Mahindra Thar could be spacious for the occupants as well as accommodating a larger boot. Its on-tarmac characteristics could also be improved with a stiffer chassis setup. We do expect the front fascia to get minor updates to differentiate itself from the three-door model.

The interior could have upholstery changes and differences in surface trim levels but the equipment list could mimic the existing model. As for the performance, the existing 2.2-litre diesel and the 2.0-litre petrol engines could continue with likely changes in power and torque figures. The transmission choices will include a six-speed MT and a six-speed AT. Mahindra could also aim for a five-star Global NCAP safety rating with the upcoming SUV.